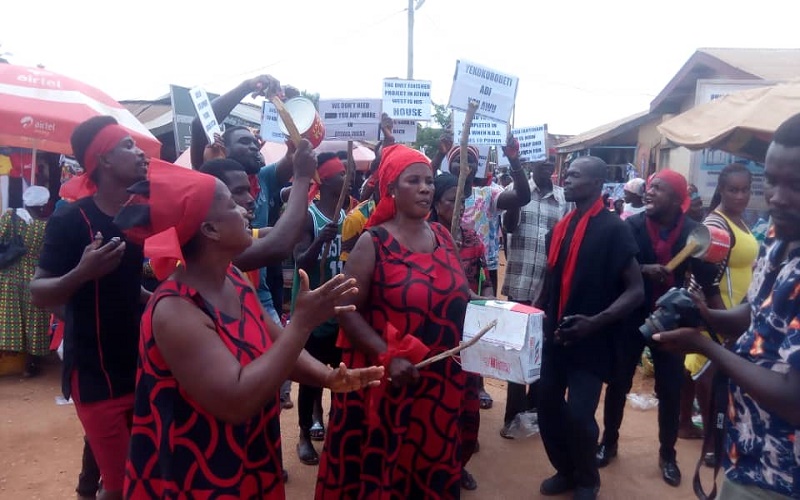 Some Opinion Leaders and residents of Abomosu in the Atiwa West District of the Eastern Region are have embarked on a demonstration against the governing New Patriotic Party (NPP) over the deplorable nature of their road network and other failed political promises.

The demonstration was staged in the early hours of Tuesday, October 1, 2019, was targeted at their Member of Parliament (MP) who is also the Minister of Roads and Highways, Hon. Kwesi Amoako Atta and to a larger extent, the President of the land, Nana Addo Dankwa Akufo-Addo who hails from the region.

Though, turn out for the demonstration was low due to inadequate awareness, the few residents including traditional rulers, unemployed graduates, commercial drivers and commuters who joined the exercise say the governing NPP has disappointed the community which is a very stronghold of the party. 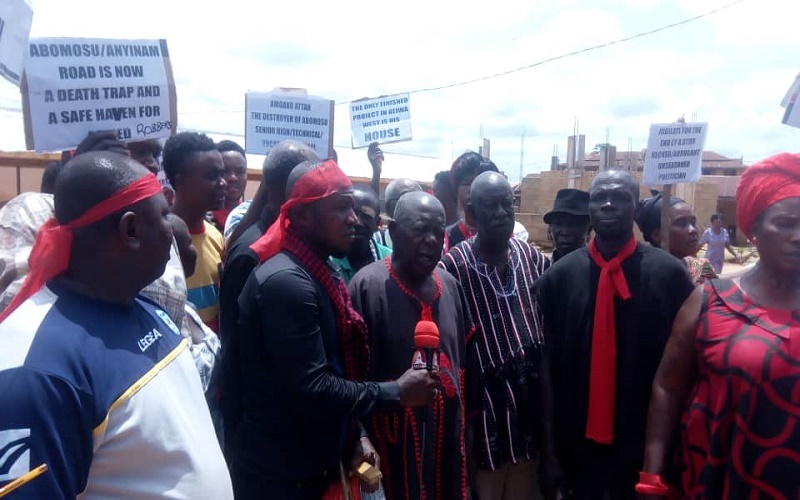 They accused their MP for denting the image of the NPP as a result of his failure to lobby for developmental projects to the area.

Wearing red and black attire, the demonstrators displayed placards some of which had inscription; Abomosu/Anyinam road is now a death trap and safe haven for armed robbers; The only project in Atiwa West is his house; We don’t need you anymore; Atiwa West the home of uncompleted projects in Ghana among others.

They demanded their MP fix the roads and also ensure the completion of all projects that were started by the previous government or forfeit their votes in the 2020 Parliamentary elections.

Nana Boadu Peprah, Regent of Abomosu who addressed the media said although they have been voting for UP/NPP , all current social amenities provided in the community were done by CPP and the NDC while the NPP enjoys their vote

According to them, NDC under Jerry John Rawlings constructed and tarred the road to the community and also ensured that the are connected to the National grid.

He said residents will stop voting for the NPP if their current developmental challenges are not fixed by President Akufo Addo who was born in the community .

Some of the demonstrators accused the MP for sabotaging a Senior High School which was being established in the community by World Joy, an NGO forcing the NGO to abandon the project.

Again, they accused the MP for failing to help the community to put a police station and also help upgrade the Abomosu Clinic.

Some unemployed graduates who claimed to have served as polling agents for the NPP said the MP has failed to honour promise of securing them jobs.