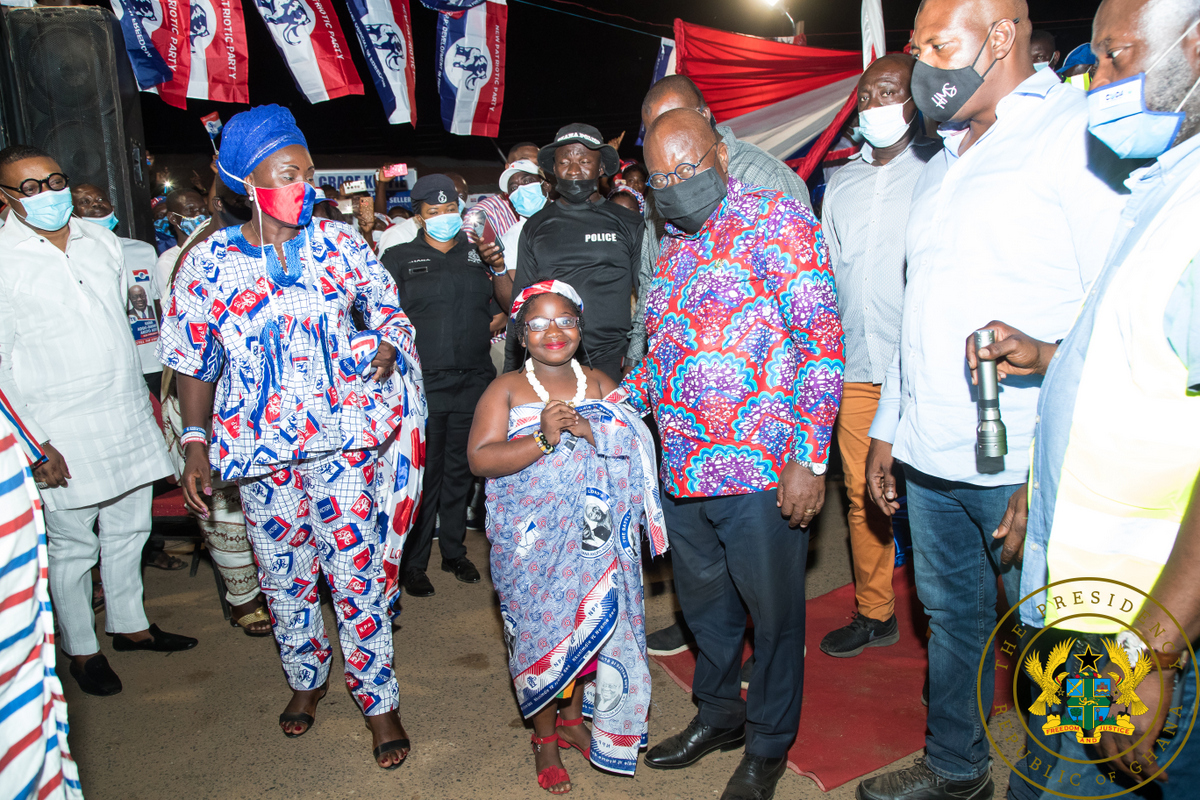 The President of the Republic of Ghana, Nana Addo Dankwa Akufo-Addo, says the policies and programmes implemented by his government, since his assumption of office in 2017, is further proof that the New Patriotic Party (NPP) has a clear understanding of how to put the country onto the path of progress and prosperity.

According to President Akufo-Addo, “The New Patriotic Party has got the blueprint for the development of Ghana, and it is going to be concretized in Akufo-Addo’s second time as President of the Republic. That is the programme ahead of us and for our country.”

The President made this known on Monday, November 23, 2020, on day 2 of his 2-day tour of the Eastern Region, as he visited Aburi, Atimpoku, Odumase, Somanya and Koforidua. On Sunday, day 1 of his tour, the President visited Nkawkaw, Anyinam, Kwabeng, Osino, Begoro and Tafo.

In his remarks, he stated that “for the four years I have led Ghana, I made some promises to you, and since what I have done so far meet your expectations, then it means that I did not come here to lie to you, I never came to deceive you people of Ghana”.

Confident that his administration has met the expectations of the Ghanaian people, President Akufo-Addo appealed four more years “to continue with my service to you.”

The President continued, “The more years you spend on learning something, the more experienced you become at it. So. I know that, by the grace of God, if the second term is realised, what lies ahead of us would far more exceed a hundred percent of what we have done.”

In order to make “Four More for Nana a reality in government, I would need a solid team, those who would be in Parliament to help in facilitating the passage of the necessary laws to help me govern.

At Tafo, in the Abuakwa North constituency, the President intimated that “God has already given you a good woman as candidate in Abuakwa North who is already in Parliament. As a result of her competence, she was given a ministerial position. Apart from being beautiful, she is also knowledgeable to help in the accelerated development of the country. I am pleading with you to extend the Four More for Nana to Four More for Hajia Kande.”

He, thus, urged all members of the NPP not to encourage calls being made in certain quarters to vote ‘skort and blouse’, in the aftermath of the NPP parliamentary primaries.

“No true NPP member can vote skirt and blouse. We are voting for Nana Akufo-Addo and Hajia Kande. We don’t need any skirt and blouse voting here. While we are at it, we should remember and honour our late MP, J.B. Danquah-Adu. I came this evening to remind you that in 2016, I told you to vote for me boom boom. Now I am asking you to vote for me Boom! Boom! Boom!” the President added.