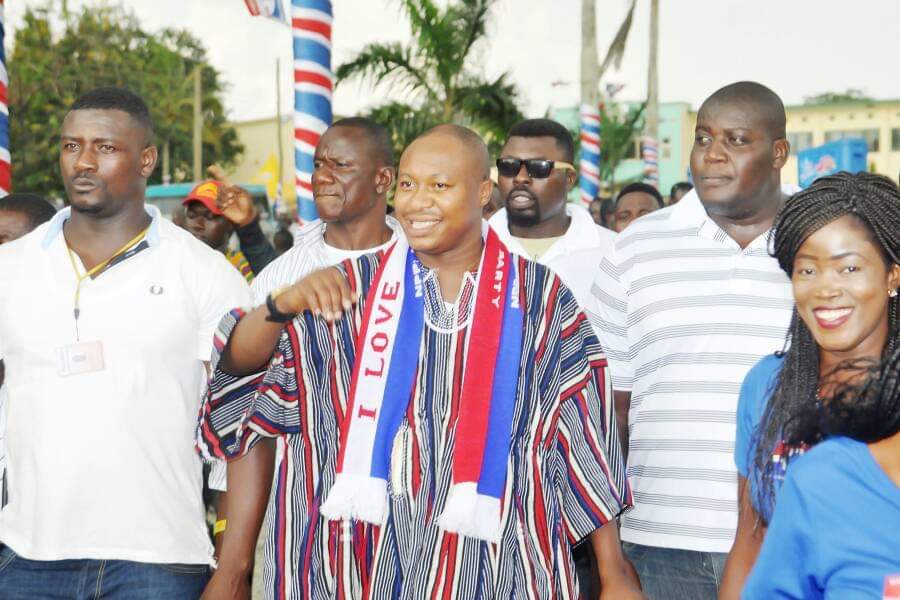 The New Patriotic Party (NPP) has indefinitely relieved the embattled Central Regional First Vice-Chairman of the party, Horace Ekow Ewusi, from his position.

This follows his deliberate moves at ignoring directives from the party hierarchy in the region to respond to allegations of fraud by false pretense, jail break and auctioning and pocketing proceeds of excavators seized from illegal miners in a petition filed against him by one Edward Kraku Adum, also a party member.

Mr. Ekow Ewusi has in the past week been at the center of controversy following a petition filed against him by Kraku Adum.

Adum, who served a jail term at the HMP Ford Prison in the United Kingdom for drug trafficking demanded for the head of Ekow Ewusi because he is not fit and proper to occupy First Vice-Chair position of the elephant family in the Central Region.

In his petition addressed to the National Security Minister, Albert Kan-Dapaah, and copied President Nana Addo Dankwa Akufo-Addo, the UK High Commissioner to Ghana, National Chairman of the NPP, Freddy Blay, and the Central Regional Chairman of the party, Robert Kutin, Adum called for the immediate removal of Mr. Ewusi from office.

He demanded that Mr. Ekow Ewusi, who is a member of the Inter-Ministerial Committee on illegal mining be probed, prosecuted and jailed if found culpable since he is not fit for the positions he is occupying both in the party and in government.

Adum contends that Mr. Ewusi has allegedly defrauded him of an amount US$10,000 by false pretense.

Some sympathisers of the NPP who were troubled by the revelation called on the party heirarchy to demand that Ekow Ewusi be made to step aside until all the issues around him are resolved.

The Central Regional Chairman, Robert Kingsford Kutin, having received a copy of the petition, informed the other executives where a decision was taken to officially write to Ekow Ewusi to respond to the allegations levelled against him.

Following the meeting, the Regional Chairman, Mr. Kutin., directed the regional secretary of the party, Richard Takyi-Mensah, to write to Ekow Ewusi for his side of the story, a directive which was duly honoured.

“Please I am directed by the Regional Chairman, Mr. Robert Kutin Jnr, to bring to your attention a copy of a petition that he has received. The said petition is against you and the petitioner is one Mr. Edward Okraku Adum. The petition was addressed to the Minister of National Security, but the Regional Chairman, the President, the National Chairman, the United Kingdom’s High Commissioner to Ghana, the CID of the Ghana Police Service, the National Security Coordinator, the BNI and the Chairman of the Council of State were copied. Surprisingly, you, the one the petition was against, were not copied. The Regional Chairman will be very happy if you can respond to this letter within a week upon receipt of this letter”, a letter written by regional secretary, Richard Takyi-Mensah, dated June 5, 2019 and addressed to Ekow Ewusi in part read.

However, Ekow Ewusi never responded to the letter. The matter was then brought to the fore of the Regional Steering Committee at a meeting held on July 5, 2019 where Ekow Ewusi was questioned as to why he was reluctant to respond to the petition filed by Adum.

The said meeting agreed that Ekow Ewusi responds to the letter within a week which he willingly pledged to do so.

However, the deadline has elapsed and Ekow Ewusi has still not honoured his pledge to respond to the issues raised by Adum in his petition to the party hierarchy.

The regional executives who are not enthused by seemingly blatant disregard of authority have in a letter signed by Chairman Kutin, and sighted by this portal, suspended Ekow Ewusi indefinitely and referred him to the Regional Disciplinary Committee of the party to further probe the matter.

“This is a gross disrespect to the Regional Party which should not be entertained in anyway. It is on this basis of Mr. Ewusi’s continuous refusal to reply to the letter and total disregard for party directives that I have taken the decision to suspend you. You are therefore suspended indefinitely and referred you to the Regional Disciplinary Committee of the party to do further investigation on the petition”, the suspension letter signed by Chairman Kutin and copied the President, the National Chairman of the party, General Secretary of the party and the Regional Minister in part read.

Meanwhile, Ekow Ewusi has refuted his suspension from the party, claiming that per the NPP’s constitution “only national can suspend the elected regional officer through the recommendations from national disciplinary committee”.

In a post on one of the social media platforms he represents, Ekow Ewusi said he has become a target by certain individuals in the region who see him as a threat to their political career and for that matter “they want to prevent him from contesting next regional election and the way to do that is to blackmail him and use it as bases for his removal from the party for him not to be able to contest any elections”.

He added “but it will not work that is why national party is treating this ghost petition the contempt that it deserves because they don’t see anything important in that petition”.