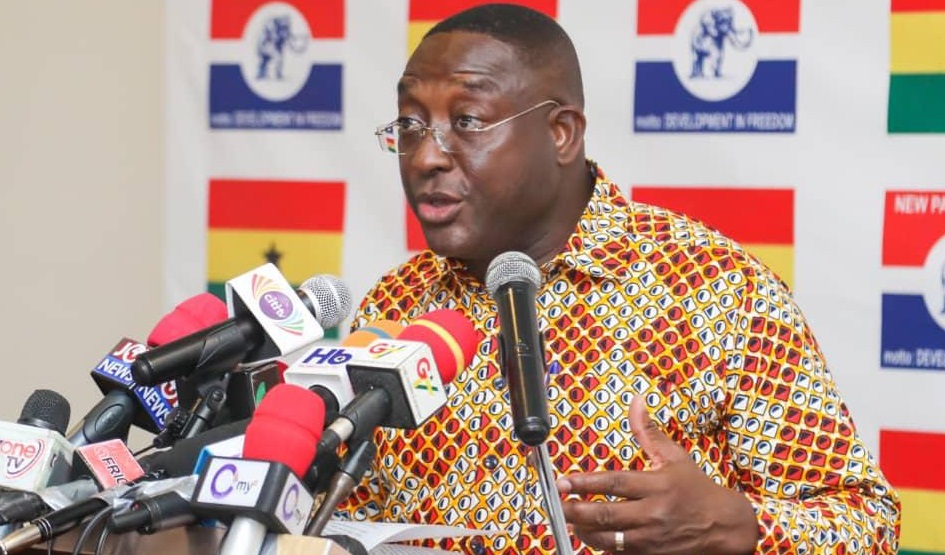 The ruling New Patriotic Party (NPP) has said it has in no way neglected cocoa roads projects as being claimed by former president John Mahama.

Speaking at a press conference in Accra on Monday, 05 October 2020 as part of its leadership series, the director of communications of the NPP, Yaw Buaben Asamoa, said the projects had to be suspended for an audit to be conducted to fix some anomalies which “resulted in inflated costs of some of the contracts awarded by the previous government.”

“Far from what the NDC will want Ghanaians to believe, at no point within the current Government was a decision taken to neglect cocoa roads projects began under the previous administration.

“However, in order to deepen accountability and protect the public purse, as well as ensure value for money, due diligence had to be exercised. Cocoa roads projects were suspended for an audit to be conducted, especially, after some anomalies which resulted in inflated costs of some of the contracts awarded by the previous government, were detected. The suspension of the project allowed for a re-scoping and proper alignment of funds as well as open competitive bidding processes towards the award of new cocoa roads contracts.,” Mr. Asamoa told the media.

However, he pointed out that those who were awarded genuine contracts by the previous government with genuine claims have been paid.

He added: “It is important to state that the contractors who were awarded contracts by the previous administration and had genuine claims were promptly paid. During the 2017/2018 cocoa season, an amount of GH₵497 million was paid to some of those cocoa roads contractors and another GH₵414 million was subsequently paid in 2018/2019 cocoa season. Also, road projects awarded by the previous government that were near completion in 2017 were, as well, allowed to be completed by the contractors.

“The records show that the Mahama-led government deviated from the original purpose and intent for the construction of cocoa roads. There was a heavy concentration on the construction of highways and in some cases roads in non-cocoa growing areas. A whopping 63% of the funds for cocoa roads was devoted to highways, 5% went to urban roads and the rest went to feeder roads. This situation has changed significantly. That is why today, the increase in tarred feeder roads across the cocoa-growing regions in Ghana can be as high nearly 40% in just under four years (37% in the Eastern Region, for example, from 34 km in 2016 to 466km today.

Candidate John Mahama is indeed a curious man. He has shown some remarkable bravery in daring to speak on the contracts he and his spouse awarded for cocoa roads. He is asking for the Government to publish what is already public, the audit report of the said cocoa roads contracts. First of all, for John Mahama, his habit was to award contracts even if he had no clue how to pay for them.”

“Cocoa roads contracts awarded by the previous government, constituting 229 projects, amounted to some GH₵5.1 billion. This was at a time when funds available to pay for road construction in total was only GH₵1.7 billion. Specifically, for cocoa roads, the approved annual mounts averaged GH₵500 million for the Cocobod Infrastructural Development Trust Fund for the entire five year period for the programme.

“Indeed, John Mahama committed GH₵3.2 billion (64%) that he did not have to just 74 projects awarded by the Ghana Highway Authority – not the Department of Feeder Roads. The 131 projects under Feeder Roads was valued at just GH₵1.5 billion. Again. The average cost per KM of trunk roads in the contract award was GH₵2.5 million; more than double the KM cost of the feeder roads at GH₵1.16m.

“The 140 contractors who were awarded the 229 contracts, none of the contracts went through a competitive tendering process. Not a single one. The cost per KM was much higher than the average cost of other government-sponsored road projects. For example, for the Preastea Samreboi Road, awarded to Asabea Engineering Ltd, the audit report found that it was inflated by 121.85%. This is a classic case of incompetent economic management, worsened by corruption. Also, several contractors were requesting payment for variation on contract amounts which were multiple times in excess of the initial contingency or variation amounts allocated.

“Whilst the Mahama-led Government could not honour the payments of contracts they signed right from 2014/2015 cocoa season, they continued to sign additional contracts till 2017 when they left office, piling up dubious debt,” Mr. Asamoa clarified.

His assertions followed a recent outburst by Mr. Mahama that it is unjustifiable for the Akufo-Addo administration to abandon the cocoa roads project. He is also demanding that President Akufo-Addo produces the report of an audit he claimed was conducted on the project.