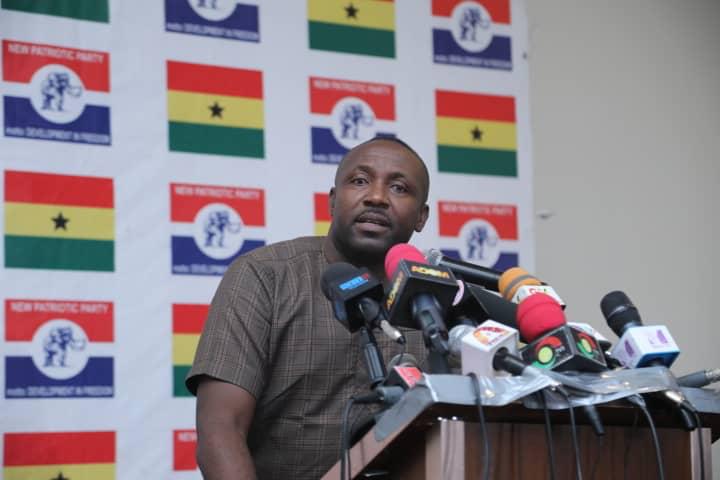 The governing New Patriotic Party (NPP) has condemned the disturbing secessionist acts in the Volta Region.

According to the NPP’s General Secretary, John Boadu, such developments are shameful and unacceptable in any country, let alone, a functioning democracy like Ghana that boasts of an enviable track record on the African continent.

About 31 members of the secessionist group, Homeland Study Group Foundation (HSGF) have been arrested for the September 25, 2020 disturbances in the Volta region.

The group blocked various roads in the Volta Region Friday dawn, resulting in a heavy vehicular gridlock in and out of the region.

Mr. Boadu who addressed a news conference in Accra on Monday, September 28, 2020, said as a responsible political party, the “NPP condemns the acts of violence, attempts to attack sensitive installations and the attacks on security agencies under the guise of a secession movement.”

The party joined several traditional and religious leaders in condemning the developments and called on the Government to be resolute in dealing with it once and for all.

The HSGF on November 16, 2019,  declared independence for the territory they call ‘Western Togoland’.  Charles Kormi Kudzodzi, the leader of the separatist group made the announcement for the separation of Western Togoland from Ghana after a meeting in the Volta Regional capital, Ho.

Mr. Boadu commenting further on the issue at the news conference insisted that “The historical accounts show clearly that the claims being made by the proponents of this agenda have got their facts totally wrong in the first place. Additionally, the geographic areas that the perpetrators seek to extend their activities to, in some cases even fall outside the original areas that were involved in uniting with Ghana.”

He added that, “Violence and attacks would not be an acceptable approach to advancing any argument in the Ghanaian democracy. We join voices with all well-meaning Ghanaians to speak up against the developments and encourage the Government to deal with the developments in accordance with law and with good conscience.”

The party further called on all political parties in Ghana to support efforts by the Government, traditional and religious leaders to address the situation comprehensively.

“The usual tendency of political parties to attempt to make political capital out of every situation should be eschewed from this front,” Mr. Boadu urged.

He added, “What we need is a united response to the developments to demonstrate to the few troublemakers that we all will not condone any efforts by any persons to create tensions and insecurity in any part of our beautiful Republic.”