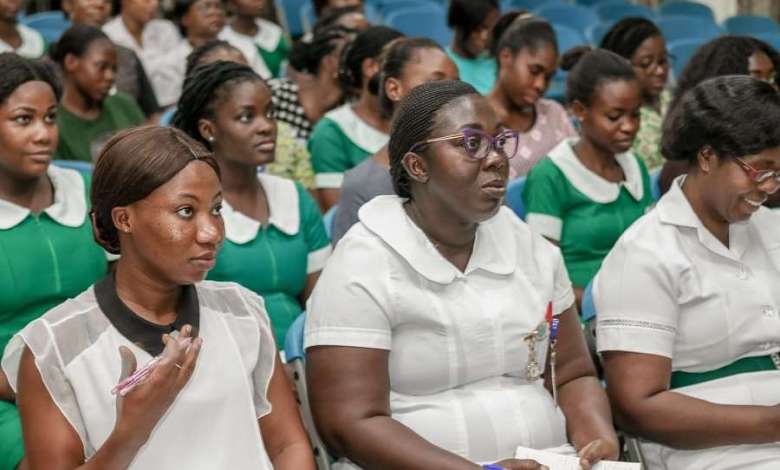 Nurses and Midwives across the country will return to work on Thursday, September 24, 2020, after temporarily, suspending their strike action following a court injunction secured by the National Labour Commission restraining them from embarking on the action.

The nurses and midwives under the umbrella body called Ghana Registered Nurses and Midwives Association announced their decision to call off the strike at a press conference on Wednesday, September 23.

The President of the Association, Perpetual Ofori-Ampofo, in a brief remarks, urged members to resume work as they get to the negotiation table with the government.

The National Labour Commission Wednesday morning began compulsory arbitration with the leadership of striking nurses and midwives in a bid to resolve their grievances for them to return to work.

This was after a substituted service granted by the High Court forcing the nurses and midwives to go to the negotiation table with their employers.

Many hospitals across the country have suspended services leaving many patients stranded.

The Ghana Registered Nurses and Midwives Association announced a total withdrawal of its services from Monday, September 21, 2020.

This was announced in a press release signed by the president of the Association Perpetual Ampofo, following government’s stance on the negotiation of the condition of service for nurses and Midwives.

The release said “a letter dated 9th, September. 2020 was also served on all stakeholders informing them about the status of the negotiation and the possible actions of the GRNMA and it’s Allied Associations (Ghana Physician Assistants Association and Ghana Association of Certified Registered Anesthetists).

But the National Association of Registered Midwives asked all practicing midwives to disregard the announcement made by the GRNMA and remain at post while leadership continue to engage government through dialogue.

“NARM Ghana reminds its cherished members of the pledge made in 2007 not to resort to strike action as a way of pressing home demands for improved conditions of service as the absence of midwives in health facilities endangers the lives of innocent pregnant women and their unborn babies,” the statement said.