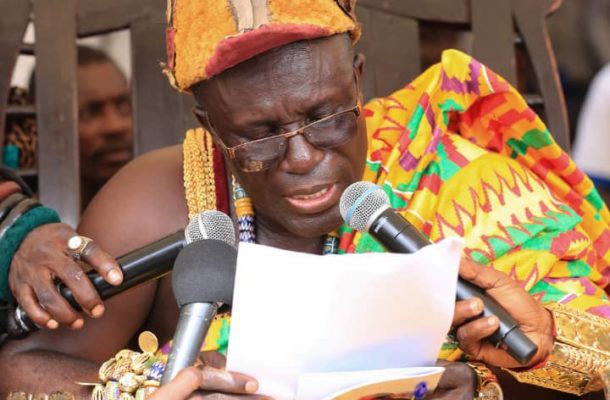 On August 20, 2021, at the studios of Accra-based Citi FM, the fearless host Omaru Sanda engaged the former Minister of Tourism, Arts and Culture, Hon. Catherine Abelema Afeku, over the 2018 Auditor-General’s report which had indicted the Ministry of misapplying GH¢200,000.00.

The said money, according to the Auditor-General’s report, was meant for the Marine Drive project, but was vied for to sponsor the Kundum Festival. The money has since been returned.

Ever since the report was made public, the Development Chief (Nkosuohene) of Lower Axim who is also the Chairman of the Axim Kundum Planning Committee, Nana Osei Nkwantabisa has been moving from one Television/Radio station to another ranting and denying knowledge about the said money.

In one of his press statements, ostensibly in reaction to the Auditor-General’s report, Nana Nkwantabisa admitted the Axim Planning Committee received GH¢7,000 in cash to support the Kundum. It is instructive to note that nowhere in the report did the Auditor-General mentioned that some money was given to the Axim Planning Committee of which Nkwantabisa is the Chairman.

Therefore, one has been wondering the motive behind Nkwantabisa’s hurriedly move to distance the Axim Kundum Planning Committee from the GH¢200,000 sponsorship package.

It is on this score that Citi FM that first broke the story, engaged Hon. Afeku who was then the Minister of Tourism, Arts and Culture, to ascertain how the said money was expended.

Sanda during the 30 minutes interview referenced Nkwantabisa’s utterances distancing the Axim Kundum Planning Committee from the GH¢200,000 sponsorship package and enquired from the former Minister if that was true.

Responding to the question, Hon. Afeku wondered why Nkwantabisa will at one point acknowledge her efforts in sponsoring the Kundum and at another, distance the Committee from the same efforts.

Hon. Afeku had throughout the interview, maintained that she did not carry money to the Kundum to expend on the festival.

However, her then Office, expended the GH¢200,000 on the over 20 artists who spent three days to perform at various sites during the Kundum festival in Axim, Nsein and Nkroful.

“I didn’t spend any money. The Chief Director worked directly with the local committee that I set up and we had artists and I have the list of all of them. We had artists for three days and they were paid directly so it is not as if Catherine took away the money”.

These artists, she noted, were all witnessed by the Omanhene of Lower Axim, Awulae Attribukusu III who sat next to her during one of the sites event of the Kundum festival.

“The Omanhene of the town, the owner, sat next to me when we were doing these festivities. Naturally, when artists are coming, they have to be enumerated and I insist what we gave them the likes of Stonebwoy and the rest was nothing as compared to their commercial rate. They [artists] did it as a favour and GH¢200,000 is nothing compared to the rates they normally charge”, she explained

Nkwantabisa, who was also engaged by Sanda during the interview to respond to some of the issues raised by Hon. Afeku claimed the Awulae was neither privy to nor witnessed any payment to any of the artists that performed at the side events of the Kundum festival.

Hon. Afeku immediately retorted and corrected the errornous impression created by Nkwantabisa. Hon. Afeku emphasised that nowhere in the interview did she refer the Awulae Attribukusu III as being a witness to payments to the artists.

Following the Citi FM encounter, Awulae Attribukusu III on August 30, 2021 issued a statement distancing himself from being a witness to payments of money to music artists that graced the Axim Kundum festival.

The Omanhene’s emphatic statement sent a signal that perhaps, he was misled by either Nkwantabisa or people who briefed him about the said interview.

One would have expected the revered Awulae Attribukusu III, having listened to or received briefings about the Citi FM interview, acted in a manner that would build bridges rather than to stoke fire to create the wrong impression that indeed his name was mentioned as a witness to payments of money of the music artists

For purposes of clarity, I will attach the audio clip of the Citi FM interview between Omaru Sanda, Catherine Afeku and Nkwantabisa.

It seems politics is getting in the way of the truth. I will therefore suggest to Awulae Attribukusu III to call the two factions, sit them down and urge his son, Nkwantabisa to apologize for creating the wrong impression and thereby, misleading him.

Where necessary, Nana Nkwantabisa must be reprimanded to serve as deterrent to other chiefs who abuse the privileges of their office.

The youth who have overreacted as far as this matter is concerned, must also be called to order.

I am not an Nzema but rather a friend of the land who always takes inspiration from the revered Awulae who, I am confident, will not disappoint me.