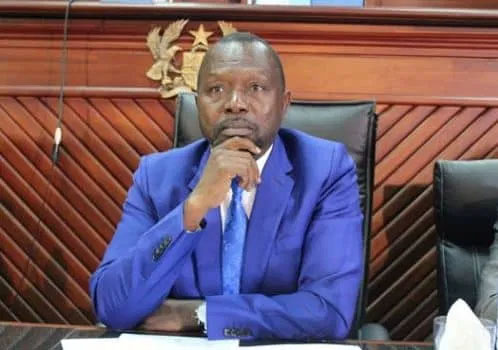 Addressing a Press conference in Accra, the General Secretary of the largest opposition NDC, Johnson Asiedu Nketiah said the invitation of the Bolga East lawmaker to appear before the General Legal Council “is yet another attempt by the Chief Justice to intimidate and suppress views that are at variance with his own views.”

He added:” It’s no coincidence that virtually all the lawyers who have been reported to the disciplinary committee of the General Legal Council by the Chief Justice, Justice Kwasi Anin Yeboah in recent times are aligned to the NDC. What is the Chief Justice’s personal interest in the punishment of NDC affiliated lawyers that he’s so keen to initiate unwarranted actions against them”

Former Deputy Attorney General, Dr. Dominic Ayine has been hauled before the disciplinary committee of the General Legal Council for allegedly questioning the independence of Ghana’s Judiciary.

According to the Judicial Secretary, Justice Cynthia Pamela Addo the Chief Justice finds Ayine’s alleged “disparaging comments unacceptable” and has therefore directed the Chairman of the Disciplinary Committee to set an investigation into the matter.

A copy of a letter dated 25th May 2021 and addressed to the Chairman of the Disciplinary Committee of the Ghana Legal Council cited a similar offense during the election petition hearing where Ayine was forgiven and warned against scandalizing the courts and undermining the administration of justice in the country.

“These comments are made against the backdrop of the Supreme Court discharging Dr. Ayine on a charge of contempt for similar comments made against members of the Supreme Court during the Election Petition hearing. Dr. Ayine apologized profusely when he appeared before the court on the contempt charge and admitted to having made comments which were unbecoming of a Lawyer of his standing and a former Deputy Attorney General.”

Meanwhile, a copy of an extract of his alleged comments has been forwarded to the General Legal Council for investigations into his alleged attack on the Judiciary.

Dr. Dominic Ayine recently questioned the independence of the judiciary due to the manner the Supreme Court adjudicated the 2020 election petition.

According to him, the Supreme Court’s failure to apply the rules of procedure as well as the consistent and continuous dismissal of petitioner’s applications or reliefs were the basis of his assertion.

“Adjudication is the process of accountability. So for me, it is okay to dismiss an application brought by a petitioner for one relief or the other whether substantive or procedural.

“But it is another thing to fail to apply the rules of procedure in a manner that enhances the accountability process. So at the end of the day, the petition actually dampened my hopes with respect to the independence of the judiciary and its ability to hold the Electoral Commission, in particular, accountable in election petitions,” he stressed at a CDD-Ghana Roundtable Discussion on ‘Presidential Election Petitions and their Impact on Africa’s Democracy’.

Commenting further on the woes of the Former Deputy AG, Mr. Asiedu Nketiah said Ghana’s constitutional democracy will suffer a grave setback if the disciplinary committee of the GLC proceeds to hold an enquiry into the matter.

“Our constitution and laws protect the integrity and the independence of the judiciary and not the sensibilities of judges,” he stressed.