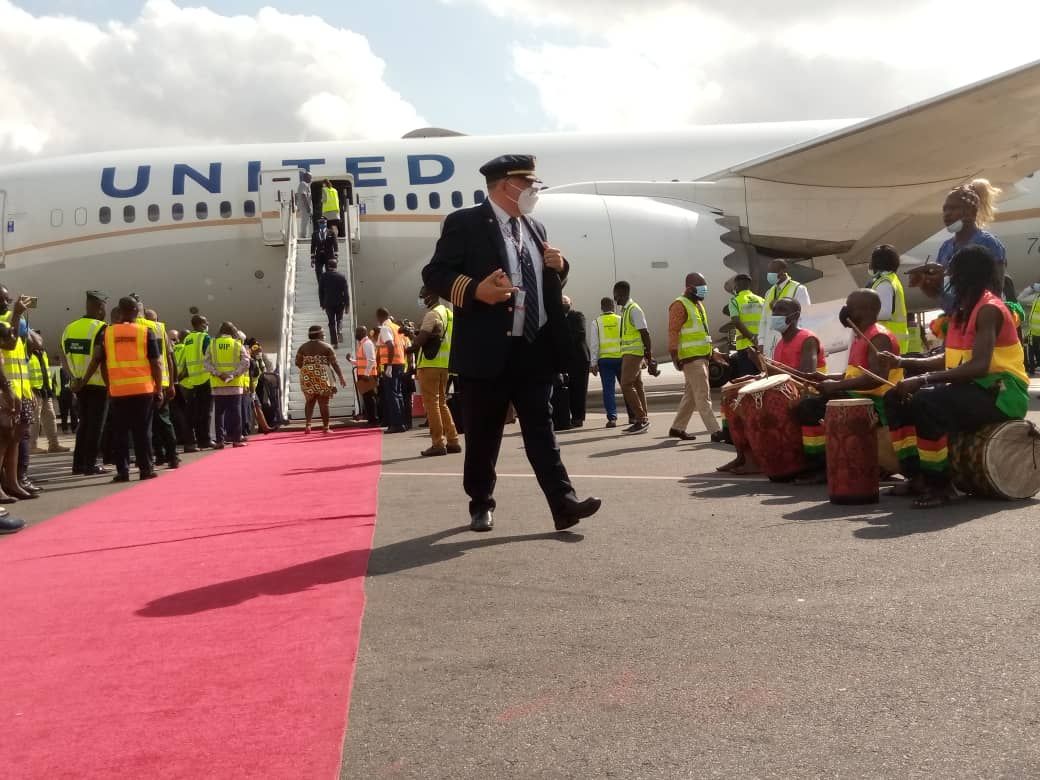 At exactly 08:08 GMT on Saturday, May 15, 2021, United Airlines flight UA996 touched base at the Kotoka International Airport (KIA), Accra, from Dulles International Airport, Washington DC, to complete the first non-stop flight of its new services to the West African city after nine years of absence.

The Boeing 787 Dreamliner was welcomed with fanfare, signifying a remarkable breakthrough by the Ghanaian government in positioning the country as the aviation hub in the African continent.

The carrier will be operating a thrice-weekly service from Accra to Dulles International Airport, Washington DC.

The re-launch of United Airlines to Ghana makes it two United States of America airlines that provide direct entry point to the US, the first being Delta Airlines which provides a non-stop flight from Accra to New York.

Ghana’s Minister of Transport, Kweku Ofori Asiamah, who was represented by Amin Abdul Rahman, Director of M & A, Ministry of Transport, at a short ceremony to welcome United Airlines commended the airliner for the bold decision they took to return to Ghana at such a difficult time in the global aviation industry.

The entry of United Airlines into Ghana, he noted, will further “build closer ties between Ghana and the United of America”. He was very confident that the thrice-weekly flight service will quickly grow to daily flights.

The Managing Director of the Ghana Airports Company Limited (GACL), Yaw Kwakwa, described the re-launch of United Airlines on the Accra-Washington DC-Accra route as a milestone and a boost to the Ghanaian economy.

“This is a remarkable breakthrough considering how the novel coronavirus pandemic has wreaked havoc on our aviation industry. United Airlines making it easy for people to travel between Ghana and the United States, especially, with their connectivity from Washington DC to other parts of America, it means doing business in Ghana to America becomes easier. Usually, citizens of one country are comfortable in doing business with companies from their own country. Therefore, United Airlines flying from Washington DC to Ghana makes it easy for people in that area to say that we want to do business in Ghana”, he noted.

Mr. Kwakwa told journalists that he is hopeful that the re-launch of United Airlines to Ghana will attract other airlines to the West African nation.

The US Ambassador to Ghana, Stephanie Sullivan, described the entry of United Airlines, the world’s most recognized airline, to Ghana as very exciting day, believing that the direct route will increase opportunities for cross border trade between Ghana and the United States of America and as well reunite family and friends.

“This flight and the re-opening of a direct flight between United States of America and Accra represents a significant turning point in the last fifteen months as vaccination takes effect across the United States and Ghana”, she noted.

“We will encourage that United Airline will come and add value and also enhance the air liberalization policy of government even as we also expect the passengers and the general public will also benefit from the services that you bring on board”, he noted.

Vice President of United International Network and Alliances, Patrick Quayle, also commenting on the re-launch of United Airlines to Ghana said “we are proud to launch this new service from Washington DC. It is a real privilege to serve Africa”.

Following their successful re-launch to Accra, United Airlines will by the end of May, 2021, launch another service Johannesburg, South Africa with Lagos, Nigeria coming onboard later in the year.

“Africa is a fantastic continent and we are proud to be back to Africa. For us it is about connecting people and it is about uniting the world. With the power of our Head in Washington DC, we can take people from Ghana to over 100 cities in America by one convenient star and we are doing it with our best aircraft, brand new Boeing 787”, he noted.

United Airlines first came to Ghana on June 21, 2010 and left after two years of operations in July 2012.