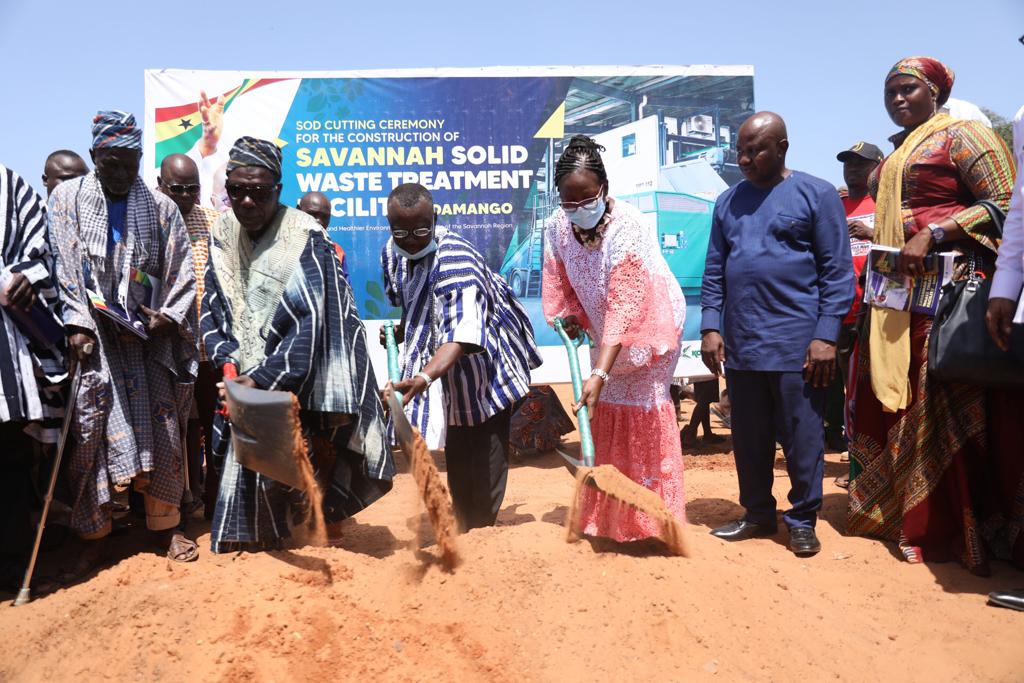 The regional capital of Savannah, Damongo, on Saturday, October 31, 2020, bubbled with excitement when the sod was cut for the construction of a solid waste treatment facility in the region.

The Regional Minister, Mr Salifu Adam Braimah, who performed the ceremony on behalf of the President, Nana Addo Dankwa Akufo-Addo, stressed that his administration remained committed in the effective and efficient management of waste in the country.

According to the President, the project formed part of his vision to make Ghana clean, indicating that when completed, the plant will help in managing waste in a more environmentally-friendly manner in the region.

“Our collective responsibility is to sustain the gains made in the sanitation and water sector,” he urged.

In this wise, President Akufo-Addo commended management of Zoomlion Ghana Limited (ZGL) for ensuring that the project comes to fruition, adding that “I owe it as a responsibility as the President of the Republic of Ghana to fight sanitation and provide potable water to the people of Ghana.”

Meanwhile, in his capacity as the regional minister, Mr Adam Braimah said “It is on this reason that I call on you to give Nana Akufo-Addo four more to do more. And to the contractors, this project is dear to the heart of the President and the people of Savannah so we want it to be completed on schedule.”

The Chief Operating Officer (COO) of Jospong Group of Companies (JGC), Madam Florence Larbi, speaking on behalf of the Executive Chairman of the group, Mr Joseph Siaw Agyapong, revealed that the project was estimated to cost 15 million Euros.

“It will be completed within four months, and will serve Bole, West Gonja, East Gonja, Sawla, North-East Gonja, Central Gonja, North Gonja and other surrounding districts,” she revealed.

She, therefore, expressed her outfit’s gratitude to His Excellency, Nana Addo Dankwa Akufo-Addo, the President of the Republic of Ghana, for his visionary leadership and personal support to the environmental sanitation sector and private sector development during his tenure of office.

“His commitment and dedication to ensuring a clean Ghana is very much appreciated. We as the leading waste management company in Ghana and other parts of Africa will continue to contribute our quota to make his vision for this sector a reality,” she assured.

The facility, she disclosed, was a 200-ton integrated, recycling and compost facility equipped with 21st century technologies in sanitation management.

“It aims to provide a sustainable solution to recover and recycle over 60% of the organic fraction of the waste into compost to boost the agricultural sector and support the Planting for Food and Jobs Agenda. Other recyclable materials like plastics, paper and metals will also be separated and processed for reuse,” she said.

Madam Larbi further disclosed that presently the region generated 115,000 tons of waste annually, adding that most of them went into landfills, making it hazardous to the residents.

“The facility has the potential of curbing this,” she said.

She continued that other recyclable materials will also be separated and processed for reuse.

She said the waste treatment plant presented the most suitable alternative to landfill waste disposal, deploying the latest technologies in sanitation management.

When completed, Madam Larbi said, the facility will create 75 direct jobs and 1,500 indirect jobs for the teeming youth in Savannah.

For his part, the Regional Environmental Officer, West Gonja Municipality, Mr Adam Wahab, who spoke on behalf of the Sanitation and Water Resources Minister, Mrs Cecilia Abena Dapaah, said the project was a priority of the government to ensure a clean Ghana.

She expressed her ministry’s appreciation to the Environmental and Services Providers Association (ESPA) led by Zoomlion for providing pick-ups for the sector to monitor and ensure clean environs.

“The ministry will continue to do what is necessary to improve upon water and sanitation in the country,” she said.

As part of the International Online Conference being held by the ECOWAS Commission from 28th April to 10th May 2021 to share its food security storage experience with its partners and the other regions of the world, humanitarian agencies have pledged to support and work in respect of the West African Food Security Storage System.