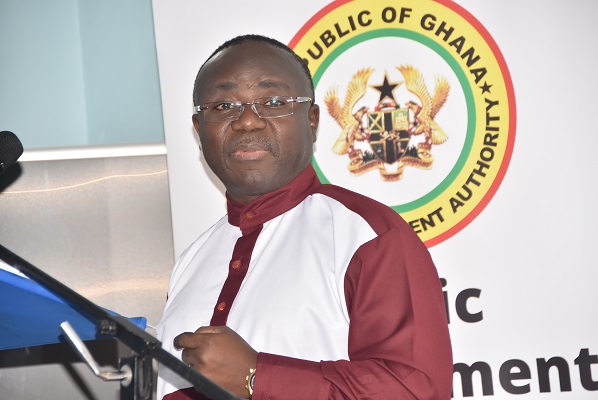 The Commission on Human Rights and Administrative Justice (CHRAJ) has reported the sacked Chief Executive of the Public Procurement Authority (PPA), Mr. Adjenim Boateng Adjei, to the Economic and Organized Crimes Office (EOCO).

CHRAJ wants the EOCO to further probe the dismissed PPA Chief Executive, especially, his bank accounts, to ascertain whether he has been involved in money laundering activities.

To CHRAJ, the huge volumes of cash it came across in the bank accounts of Mr. Adjenim Boateng Adjei, during its investigations into the alleged ‘Contracts for Sale’ in which the PPA boss was cited for conflict of interest, was very suspicious, and demands further investigations.

“The Commission came across evidence of inordinately large volumes of cash passing through the Bank Accounts of the Respondent far in excess of his known income, and for which he could not provide satisfactory explanation (unexplained wealth). Besides the excessive nature of the volumes of cash, the pattern of the deposits and withdrawals also raised suspicions about the nature of the transactions. Accordingly, the Commission is referring the suspicious transactions in the Respondent’s Bank Accounts to the Economic and Organized Crimes Office (EOCO) for further investigation under the Anti-Money Laundering Act, 2008 (749) as amended”, portions of the 188 page-report of CHRAJ said.

Mr. Adjenim Boateng Adjani’s appointment as Chief Executive of the PPA was terminated by the President of the Republic, Nana Ado Danka Akufo-Addo, on Friday, October 30, 2020.

This follows the submission of a report to the President by the Commissioner of the Commission for Human Rights and Administrative Justice (CHRAJ), Mr. Joseph Whittal, in which the Commission concluded that, on the totality of the evidence, Mr. Adjenim Boateng Adjei had put himself in a position where is personal interests conflicted with the performance of his functions as CEO and Board Member of the PPA.

“Having satisfied himself of the fact that the recommendation made by CHRAJ is properly motivated and well-founded, the President has expressed his appreciation and gratitude to Mr. Joseph Whittal and CHRAJ for the thorough and methodical manner in which the matter has been addressed”, the statement released by the Presidency in part read.