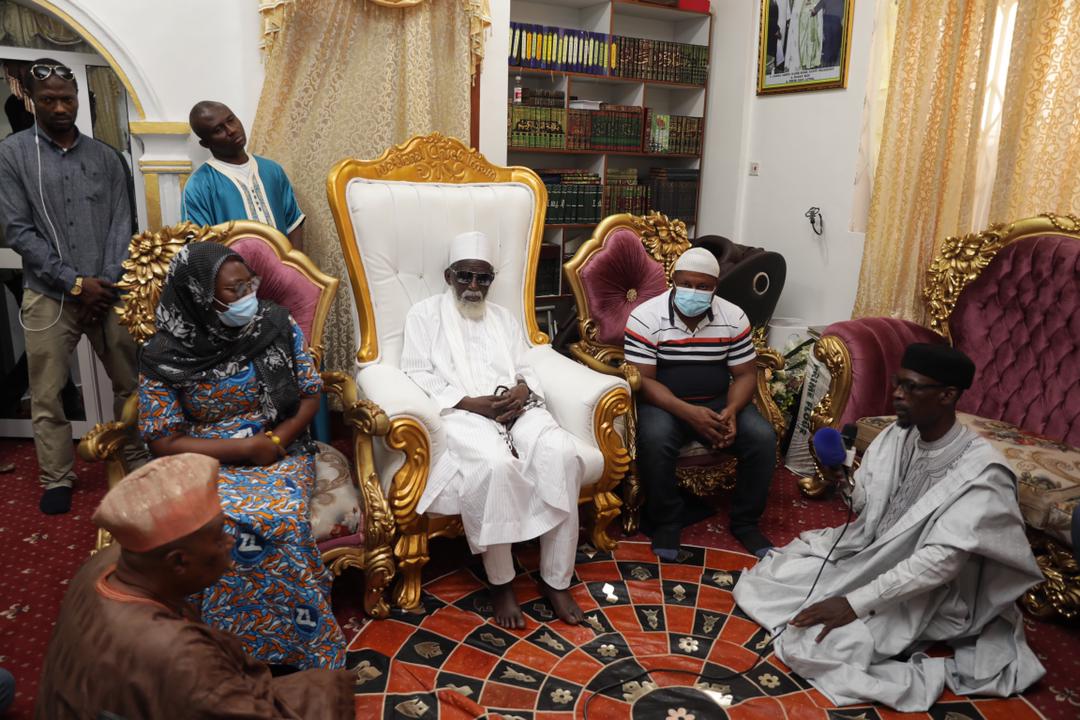 The Jospong Group of Companies (JGC) and Zoomlion Ghana Limited have donated several bags of rice and gallons of oil together with an undisclosed sum of money to the National Chief Imam, Dr. Sheik Osmanu Nuhu Sarabutu, at his residence as support for the celebration of a month long fasting and prayers of Ramadan.

Presenting the items on behalf of the Executive Chairman of the Jospong Group and owner of Zoomlion Ghana Limited, Dr. Joseph Siaw Agyepong was Chief Communications Officer of the group, Ms. Sophia Nana Kudjorji, who disclosed that the Jospong conglomerate’s successes apart from hardwork is heavily due to prayers of the Muslim and Christian communities of Ghana and especially the clergy among whom is the National Chief Imam.

She said Dr. Agyepong remains one of the true and loyal sons of the Chief Imam and has set aside each Ramadan to show love and compassion to the needy through the Chief Imam as he knows during periods of Ramadan the needy will troupe to their father for support to go and celebrate the feast and therefore the food stuff was to help the Chief Imam cushion those category of persons to also smile during the celebration.

“It has become a ritual that the Jospong Group of Companies visits our father at the end of the Ramadan to support him with our token to continue to concretize our father-son relationship” she stated.

Madam Kudjorji hinted that waste management is one of the biggest business of the Jospong Group which is being expanded in the construction of waste composting and recycling as well as waste water treatment plants in all 16 regions of Ghana and when completed later this year it will employ over 5000 more youths.

The Chief Communications Officer was accompanied by some senior staff of the Jospong Group of Companies for the kind gesture.

The National Chief Imam, Dr. Sheikh Osumanu Nuhu Sharubutu then offered special prayers to the Almighty and Merciful Allah to open doors for the Jospong Group of Companies and Zoomlion to expand and employ the jobless youth in the various communities.

“In our communities are several educated and non-educated youth who are mostly jobless and my utmost request to Allah is to expand Jospong to employ more people”, he prayed.

The Chief Imam also commended Dr. Joseph Siaw Agyepong, Executive Chairman of the Jospong Group of Companies (JGC) for his regular support during Ramadan which goes a long way to feed needy Muslims who need the items to break their fast.

He added that Zoomlion has been cleaning the various Zongo Communities and Jospong always releases his workforce to clean his community whenever he places a call.

In a similar development, the company presented same food items to the Ahmadiya Mission of Ghana in a ceremony at the headquarters in Accra.

Chief Communications Officer of the Jospong Group, Madam Sophia Kudjorji stated that the gesture was in furtherance of the company’s commitment to continue to keep closed ties with religious bodies and solicit their prayers for one of the core values of the company is godliness and fellowship. She assured that the company will continue to offer support to its key stakeholders especially the Muslim Community in times of their fasting.

A Deputy Ameer of the Ahmadiya Mission, who received the items, Alhaji Ahmad Suleman Anderson, expressed satisfaction in the kind gesture and explained how fasting is a means to discipline people to know how their poor fellow human beings suffer.

“During this period, sometimes you even find everything in your refrigerator and kitchen but you have to restrain yourself not to eat it because of the fasting so as to understand what hunger means and that is the teaching of the Holy Quran”.

He assured the Jospong Group of their continuous prayers for peace and the growth of the company among others.

The Minister of Transport, Hon. Kwaku Ofori Asiamah, has charged the Governing Board of Metro Mass Transit Limited (MMTL) to bring their expertise to bear by introducing innovative measures that will help turn around the transport company.

National SIM card re-registration to take off in October