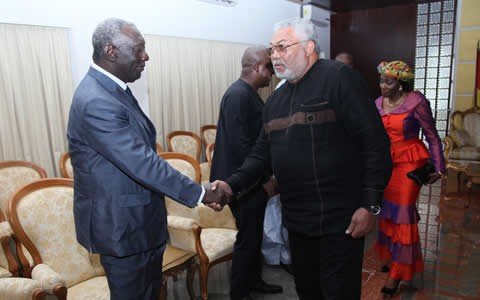 A former President of the Republic of Ghana, John Agyekum Kufuor, says news of the passing of former President Jerry John Rawlings came to him and his immediate family like a thunderbolt since they weren’t expecting such occurrence.

In a statement released in Accra on Friday, November 13, 2020, Mr. Kufuor said even though he and Mr. Rawlings had their own opinion on matters of the state, he felt that Rawlings “was trying to do the best he knew and could, under this peculiar circumstances”.

“When the time came for him to step as President on 7th January, 2001, he obliged and obviously tried to contain whatever reservations he had about me and my government that succeeded him and his government, within the bounds of the national Constitution of 1992”, he noted.

He added “In this regard, whatever doubts persisted about his commitment to democratic rule became attenuated and earned him a legacy of contributing to the sustenance of democratic governance of our country till his demise”.

To Mr. Kufuor, history would give the first President of the Fourth Republic a balanced place in the annals of the nation.

He expressed his heartfelt condolences to the widow, Nana Konadu Agyemang Rawlings, their children and the larger family.