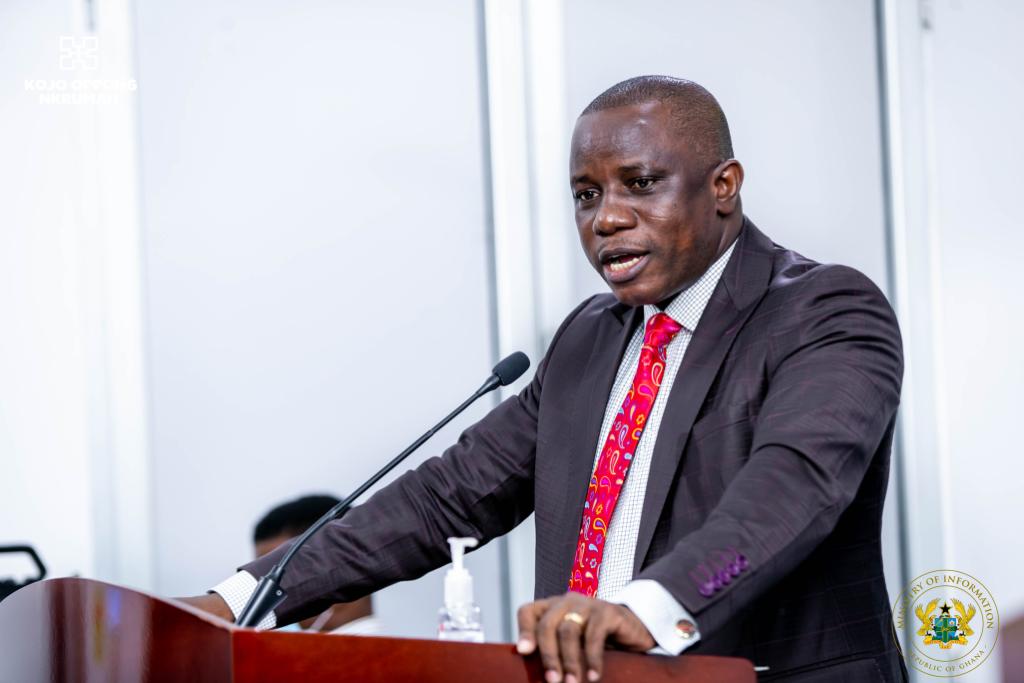 The Minister for Defense, Dominic Nitiwul, has mounted a spirited defense over why Ghana must get its military a new aircraft which could also be used for Presidential travels considering the current state of the Falcon 900 Ex-Easy.

According to him, the Falcon 900 Ex-Easy which is 11 years old now has developed two engine faults during the period and though serviceable, could also not be used for a non-stop journey to far away countries that will take nine hours or more to cover without refueling stops.

Besides, the Falcon 900 Ex-Easy lacks enough office space to accommodate about 100 or more passengers and also lacks space for Presidents who use it to refreshing up before attending meetings.

As a result of these, government had to to spend US$50million over the last ten years to airlift soldiers going on United Nations Peace Keeping Missions. Apart from that, the country had to spend more on staffers who travel with the President on official duties.

“We must remember that ideally, a President must travel with his Office, thus, the staffers who must be around him to enable him perform his duties effectively even whilst abroad. As well, it is important that he travels with security and also the Presidential Press Corps when necessary. Currently, when the President uses the Falcon 900 Ex-Easy Jet, most of these other necessary staffers travel commercial with increased cost as well as often suffering attendant delays in transit because of the lack of direct flights to the ultimate destinations. Where the President has to travel to two or three destinations on a trip, two or three separate staff units have to be deployed to each of the countries. With the difficulty of air travel, especially with in Africa, staffers sometimes do not arrive at the intended destinations in time to make the programs. Ultimately, the cost is also a huge drawback as well”, he told Parliament on Wednesday, June 16, 2021, in response to a question posed by the NDC MP for North Tongu, Samuel Okudzeto Ablakwa.

He added “the capacity of the current Falcon aircraft is far below that of Fokker 28 which flew VVIPs of more than 25 passengers during Acheampong, Akufo, Rawlings and Kufuor era, hence, the urgent need for an appropriate aircraft which can carry better payload in terms of passengers of 70 – 100 people and to carry all their baggage without affecting the performance of their aircraft”.

The stance of Mr. Nitiwul has attracted a lot criticisms from a cross section of the public and some political parties in opposition, notably, the National Democratic Congress (NDC). Some notable media houses have also joined the fray, with some linking the lack of space to refreshing up in the Falcon 900 Ex-Easy as the reason why President Akufo-Addo chartered a private jet at a cost of £15,000.00 per hour for his recent trip to France.

They have accused the Defense Minister of speaking as a party man and deliberately preparing the grounds in order to get the people along in order to buy a new aircraft for the President to use for his air travels.

“The people of Ghana should disregard that agenda setting by some of the media houses. They should disregard it because I didn’t mention Akufo-Addo’s name. It was a general things that I said Presidents because I didn’t want to link it to anybody. I was talking like an Airforce Officer who is requesting for something. So, I was talking as a Defense Minister not as a Communicator of NPP. No”, he noted.

He also took on the media houses that linked his comment regarding the lack of space in the Falcon 900 Ex-Easy for Presidents to refreshing up as the reason why President Akufo-Addo chartered a private jet for his recent trips abroad, noting that their actions amounted to doing the propaganda of the opposition political parties.

“We grounded Antrak Airline here and refused to let them fly because they were having problems. Do you think that if we had another aircraft, we would have allowed Presidents to fly in this Falcon? We have no choice to allow Presidents to fly it. It had encountered two engine failures and for thirty minutes, we had an engine failure and it was in New York. Then President, John Mahama experienced one and President Akufo-Addo also experienced another. Most of them, they had to false-land. So, I will urge the people of Ghana to disregard such headlines by the media. It is an agenda setting by some of these media houses. I didn’t mention Akufo-Addo’s name. It was a general thing that I said Presidents”, he noted.