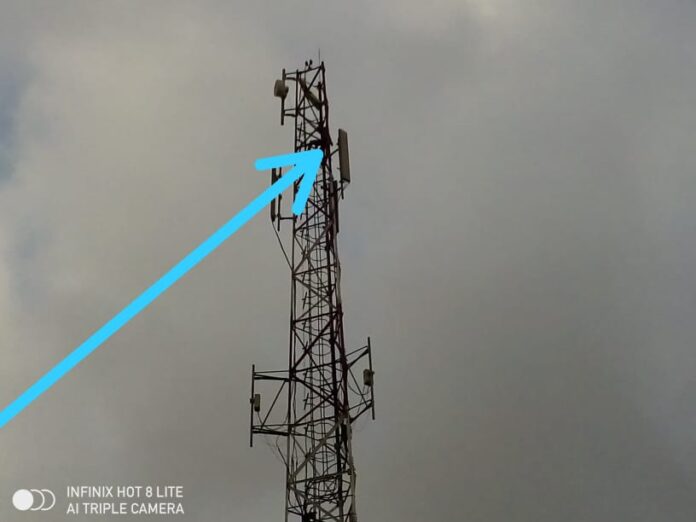 The Electoral Commission will have another reason to stick to its promise to announce election results within 24 hours as this may be the lifesaver of a gentleman who has climbed to the top of a mast awaiting the declaration of President Nana Akufo-Addo as winner of Monday’s elections.

According to Kasapafmonline.com report, the young man in his thirties popularly known as Ayoma in the Asenua community of the Kwabre East municipality has vowed not to descend from the life-threatening height without President Akufo-Addo’s win.

Abusua FM’s James Kwasi Oppong reported that the man climbed up the telecommunications mast with a Flag of Ghana, a gallon of water and some food items.

“He has found himself a place to sit on top of the mast. His bag and gallon of water are all close to him. He told people in the area he was going to climb up the mast and until President Akufo Addo is declared winner in the December polls, he will remain there,”

The Assembly member of the Asenua Electoral Area, Kaakyire Asumadu told host of Abusua Nkomo, Kojo Marfo, the man had embarked on similar missions before but was taken down by the Fire Service.

He indicated that all his attempts to convince him to rethink his perilous decision had not yielded any results since he started communicating and gesturing signs of plea to him at 2 o’clock am.

“I have now decided to go report to the police to see how they can deal with the matter,” he averred.

Meanwhile, several people in the Asenua community have gathered at the base of the mast scared of what might happen if the man tripped.