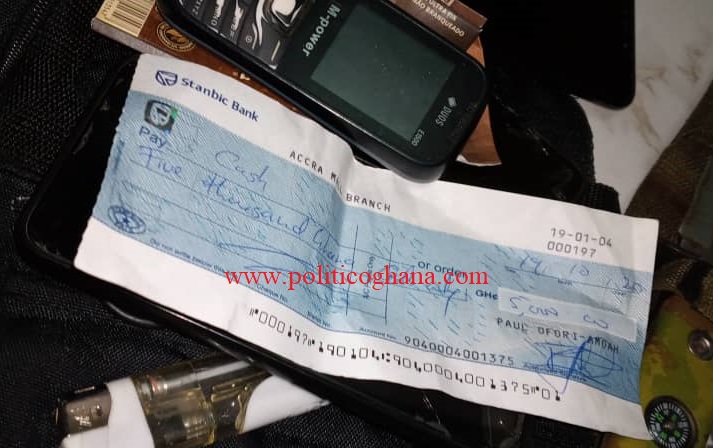 Two cheque exhibits, each valued at GH₵5,000.00, has given some credence of the involvement of the National Democratic Congress (NDC) parliamentary candidate for Agona West, Paul Ofori-Amoah, in the botched operation that was allegedly targeted at killing the Minister of Gender, Children and Social Protection, Hon. Cynthia Mamle Morrison.

Four suspects are currently in custody at the Agona Swedru Divisional Police Command following their arrest at their hideout in Elohim Hotel in Agona Swedru by a police patrol team.

The four, Saddick Abubakar, Gordon Kunya, Isaac Addae and Fatau Dauda, www.politicoghana.com understands, were in high spirit allegedly hatching a plot to kill the Gender Minister who is also the New Patriotic Party (NPP) Member of Parliament (MP) for Agona West constituency, when the police patrol team pounced on them at about 10:00pm on Saturday, October 17, 2020, and took them to the Police Station.

The gang of four during interrogation, mentioned Mr. Ofori-Amoah as the person who allegedly hired their services and brought them to the Elohim Hotel, Agona Swedru.

The NDC parliamentary candidate who booked the hotel rooms for the armed men and was therefore considered an accomplice, was invited and detained.

He has since written his police caution statement and granted own recognizance bail for him to be reporting to the Police Station daily.

The NDC in a statement denied media reports that its parliamentary candidate for Agona West constituency is an accomplice of the gang of four. The party also maintained that Mr. Ofori-Amoah was not arrested and detained at the Agona Swedru Divisional Police Command.

The party then urged the general public to treat such media reports with the contempt that it deserves since there is no iota of truth in those reports.

“We wish to clarify for the avoidance of doubt that, there’s been no such detention or arrest and that our teeming supporters, sympathizers and followers should treat the fake news with the contempt that it deserves”, the statement in part read.

However, the two open cheque exhibits founds on the gang of four puts Mr. Ofori-Amoah in a very difficult situation over his alleged involvement in the botched operation.

The two open cheque exhibits are Stanbic Bank cheque, Accra Main Branch that bear the name of Mr. Paul Ofori-Amoah. They were post-dated to October 19, 2020.

It is not clear how the gang of four got those open cheques from Mr. Ofori-Amoah if he has no idea of the activities of the gang of four or connected to them in the alleged operation they were going to execute.

Apart from the two open cheques exhibits, a knife, cutlass, lighter and two packets of Razzler were also found the gang of four when a search was conducted in their hotel rooms.