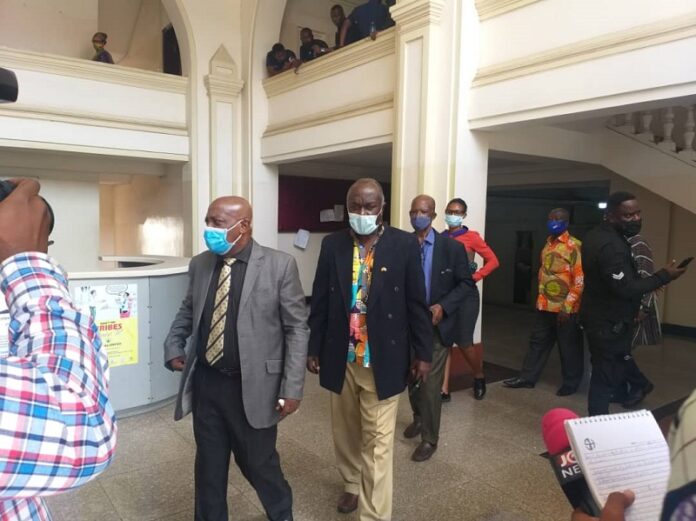 The Supreme Court has ruled that it’s unconstitutional for the Chenerey Hesse Committee to provide a special pension scheme for Members of Parliament who have finished serving their term.

Peoples National Convention’s (PNC) David Apasera, who is an ex-MP and 39 former Members of Parliament (MPs) sued the government for GH₵233,495 each, being their accrued monthly pension pay since January 2009.

The amount being claimed works out to GH₵13,735 per person per month, but interest accrued during the 85 months raises the amount to GH₵233,495 each.

The seven-member panel presided over by Justice Jones Dotse in its judgement said it was unconstitutional for the committee to make such recommendations.

The judgement read by Justice Sule Gbadegbe who is taking a bow from the bench ordered the Court of Appeal to carry out the answer as directed by the Supreme Court.

With the suit filed, the 40 former MPs are collectively demanding GH¢9,339,800 from the government.

The basis of the legal action by the 40 former MPs is the Chinnery-Hesse Presidential Emoluments Committee (PEC) which provides that parliamentarians who were 50 years and above and exited Parliament, having served two full terms, should be paid some sums of money as pension benefits.

Joined to the suit as defendants are the Attorney-General (A-G) and the Minister of Finance.

The plaintiffs, in their statement of claim, averred that since 2011 they had been negotiating with the government, through the Ministry of Finance and the leadership of Parliament, for aspects of the Chinnery-Hesse Committee report in relation to their pensions to be paid, but the negotiations, they claimed, had proved futile.

Several attempts, demands or requests made on the government to have these pension benefits paid to the plaintiffs have proved futile,” they said.

According to the plaintiffs, based on a letter dated June 25, 2015, the A-G directed the Ministry of Finance to make payments to them but the ministry had “refused, neglected or failed to pay the said money to the plaintiffs”.

The action of the ministry, the former MPs added, continued to cause them distress, as most of them remained unemployed because of old age and were, therefore, unable to sustain their families.

They said being advanced in years had also come with various medical conditions, the management of which required daily doses of expensive medication.

The former MPs said on November 24, 2015, a notice to institute civil action was served on the state, but the A-G, apart from a letter dated December 22, 2015 which acknowledged its receipt of the suit, had failed to respond.

The disgruntled former legislators claimed that the conduct of the government showed that unless compelled by the courts, it was not ready to pay the pensions duly owed them.

The 40 former MPs are