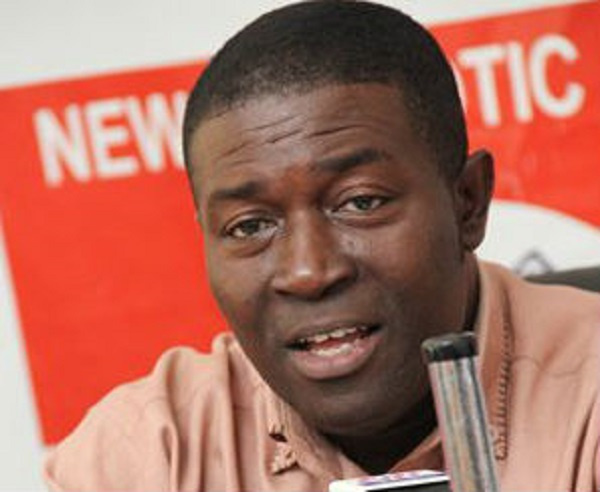 A member of the communication team of the New Patriotic Party (NPP), Nana Akomea, has lashed out at former president John Mahama over his failure to act quickly when the signs were clear on the walls that some banks were on the verge of collapse during his administration.

Speaking at a press conference in Accra on Monday, September 21, 2020, Mr. Akomea said Mr. Mahama took for granted the savings of the poor Ghanaian and failed to act, despite all the signs pointing at a gloomy situation.

According to him, the Central Bank even warned in a report of dark clouds hanging over the financial sector but Mahama’s administration was sleeping on the job therefore it is disingenuous on the part of the former president to return and make promises he cannot deliver.

“Let me state emphatically that the banking sector crisis we witnessed in the country was caused by the NDC. It would be recalled that the 2016 Financial Stability Report of the Bank of Ghana, revealed that bad loans on the books of commercial banks in the country increased by 14.9% to GH¢4.52 billion in 2015 against the GH¢2.72 billion recorded in 2014.

“Also, the economic and financial data from the Central Bank showed that Non Performing Loans (NPLs) rose sharply from 11.2% in May 2015 to 19.3% in May 2016. The Central Bank under the erstwhile Mahama administration admitted in 2015 that the spate of non-performing loans on the books of banks was one of the major challenges faced by the banking sector.

“The Central Bank stated categorically that, the level of impaired loans in one of the largest commercial banks had quadrupled and the situation was becoming widespread in the banking sector. Due to the non-payment of these loans, the banks had declared GH¢2.4 billion of outstanding debt stock of loans as bad debt.

“You would recall that, the 2015 Asset Quality Review of Banks, exposed significant vulnerability of banks to the economic conditions at the time. The review further stated that if the affected banks had attempted to cater for all the bad loans, a significant number of them would have collapsed,” Nana Akomea outlined.

He added: “Let me remind you all that, Dr. Mahamudu Bawumia, the economic prophet of our time, realising the bad state of the banking sector, warned the Mahama-led government in September 2016, that 8 banks risked collapse due to the increasing bad loans on their books. He stated categorically that these 8 banks recorded low capital adequacy ratios of below 10% and in some cases below 5%, leading to their near collapse.

“Typical of Mr. Mahama and his NDC, they paid no heed to Dr. Bawumia’s caution and watched the banking sector collapse. In fact, Mr. Mahama in his State of the Nation’s Address (SONA) in 2016 admitted that the banking sector under his watch was collapsing due to poor supervision from the Bank of Ghana.

“In addressing the state of some microfinance companies that had been adversely affected by poor supervision, Mr. Mahama said, and I quote “Mr. Speaker, over the past five years, there has been a proliferation of microfinance companies. These companies come under the direct supervision of the Bank of Ghana. Unfortunately, lack of effective supervision has resulted in many cases in which microfinance companies licensed by Bank of Ghana have breached the rules and created supposed pyramid schemes that have eventually come crashing down”. This admission by Mr. Mahama, as captured in his own speech makes mockery of his recent allegations that the Akufo-Addo-led government is to blame for the banking sector crisis.”

To this end, he said the NDC under Mahama lacks the moral right to come before Ghanaians to seek their mandate to return to power.

Blaming the John Mahama administration for the banking sector crisis, which led to the collapse of about eight banks, Mr. Akomea said the ruling party is committed to building a strong economy where every Ghanaian will enjoy from their toil.

Mr. Akomea said the timely release of funds to cushion the plight of the customers amid the coronavirus pandemic clearly shows that president Akufo-Addo has the citizens at heart.

“Consistent with its 2016 campaign promise, the NPP-led government is on course to paying all customers of the defunct DKM and other microfinance institutions, in addition to those affected by the financial sector clean-up. Prior to the GH¢3.56 billion recently made available to the receiver to pay the depositors of these defunct institutions, government had begun full payment of customers of DKM and other microfinance companies that collapsed in 2015.

“This remains a monumental feat of the NPP and evidences the sensitivity of this government to the plight of Ghanaians. Cognizant of the hardships and liquidity crunch occasioned by the COVID-19 pandemic, this could be described as a prudent approach to ease the already constrained economy, boost economic activity and expedite the return of the economy to normalcy,” Akomea noted.

He added: “It is worthy of note that government in the first quarter of 2020 expended an estimated GH¢13.6 billion, representing 3.5% of GDP on the resolution of insolvent banks. The financial commitment made by government thus far is indicative of its resolve to create a highly robust and an internationally competitive financial sector capable of supporting the growth and development of firms, businesses and the various sectors of the economy. Friends of the Media, the NPP-led government should therefore be highly commended for its efforts in ensuring that all depositors of the banks, specialized deposit-taking institutions and microfinance institutions are fully paid.”

The former MP and Minister of state stressed that the opposition National Democratic Congress (NDC) led by Mr. John Mahama cannot be trusted with its promises. According to him, most of the promises Mahama is making to Ghanaians concerning the banking sector had already been fulfilled by the Akufo-Addo government.

“The NDC over the years has proven to be gravely inconsistent especially under the leadership of Mr. Mahama. One would expect that as an opposition, they would have drawn lessons from their incompetence in managing the economy and safeguarding the welfare of Ghanaians. Characteristic of the NDC, a myriad of empty promises has been made to hoodwink electorates.

“Is it not interesting that the NDC is promising to pay depositors of defunct financial institutions, when the ruling NPP has settled over 90% of the customers and is in the process of making good the rest? Is it not this same NDC that superintended the collapse of the financial sector and denied depositors of DKM and other microfinance institutions any compensation? So I ask, what has changed? I suppose your guess is as good as mine. This is an obvious demonstration of gross incompetence.”

He reminded Ghanaians that the NDC has always doubted the promises of the NPP, which have later turned to be beneficial to Ghanaians hence there is no need to return them to power come the December 2020 elections.

“Friends of the Media, we all are witnesses to the unambitious proclamation by the NDC that Free SHS was only possible in 20 years. That assertion boldly exemplified their penchant for glorifying mediocrity. Today, they have made a sudden U-turn on what they hitherto considered impossible.

“Again, under the erstwhile NDC administration, the Road Traffic Regulation 2012 (L.I 2180) which outlawed the ‘Okada’ business was passed. It is therefore unfathomable that the same party that criminalized ‘Okada’ business is today trumpeting the legalization of same as a headline campaign message.

“Dr. Bawumia’s caution of a banking sector crisis prior to the 2016 general elections only for it to occur affirms the NPP’s ability to effectively identify challenges in the economy. Sadly, not only did the incompetent NDC fail to take action to avert the crisis, but also, they emotionally assaulted victims of the financial sector crisis. Asiedu Nketia’s disparaging comment added salt to the injuries of the victims. Interestingly, the same party is today promising to “reimburse them” when elected. God save Ghanaians from such deliberate deceit!

“The NDC’s recent promise to pay customers of DKM when they earlier described the victims as reckless investors, is a manifestation of double standards.Evidently, Mr. Mahama and his NDC when in government find it expedient to cancel what is good for Ghanaians – such as the teachers’ and nurses’ trainee allowances only to promise their restoration when in opposition,” he reminded Ghanaians.

He concluded: “Such U-turns are not accidental, rather, they are clear manifestations of Mr. Mahama’s indecisiveness, lack of credibility, penchant for vain promises intended to score cheap political points and his general insensitivity to the plight of Ghanaians, particularly victims of the financial sector crisis which thrived under his watch.

“It had to take the promise-keeper,President Akufo-Addo,to clean the financial sector mess, inject the requisite financial resources that saved existing financial institutions from collapsing and prevent the loss of jobs. By the end of October, 2020, all affected persons would have received their investments in full. This can only happen under an Akufo-Addo-led government, in spite of the ravaging effects of COVID-19. Let us ask Mr. Mahama whether he still considers Ghanaians as having short memories, hence cannot remember his misdeeds? Although Mr. Mahama doubts our ability to remember, his continuous display of double standards and vain promises clearly indicate the kind of leadership he offers as opposed to that of the promisekeeper, President Akufo-Addo.

“Ghanaians have seen the light of progress and inclusive development under President Akufo-Addo. We also witnessed the deprivation, stagnation and selectivity that characterised the Mahama-led government. We cannot afford to take Ghana back to the dark days under Mr. Mahama. We rather must commit to keep progress on course by voting for the NPP come December 7, 2020.”