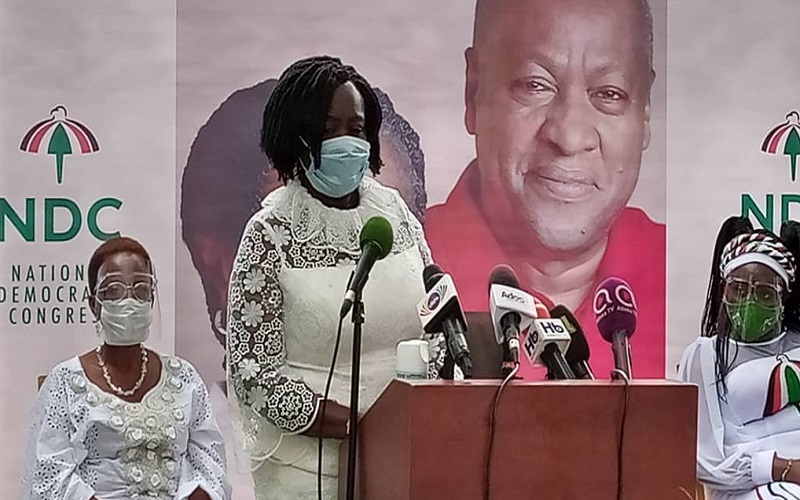 Running mate of the opposition National Democratic Congress (NDC), Prof. Jane Naana Opoku Agyemang, has charged porters popularly known in the local language as ‘Kayayeis’ not to look down upon themselves or be discouraged since the work they do has contributed a lot in making Ghana what it is today.

Interacting with the Minority Women Caucus of Ghana’s Parliament in Accra on Thursday, July 16, 2020, following their visit to congratulate her on her nomination as to partner the flag bearer of the umbrella family, John Dramani Mahama, the former Vice-Chancellor of the University of Cape Coast (UCC) told the Kayayeis not to allow themselves to be disrespected by anyone.

“I want you to know that you have a proper name. Your name is not Kayayei. You have a proper name. You deserve the respect like everybody else. Don’t allow anyone to disrespect you. That is all that I want to say. Without you our society will not be what it is today. Believe that whatever that you are doing in whatever category is as important as at any level. I want to tell you thank you very much and be confident with yourself. If you didn’t get there make sure your children do”, she told the Kayayei’s who had stormed her residence to grace the occasion.

Her comments follows claims by the General Secretary of the governing New Patriotic Party (NPP), John Boadu, that the elephant family is never disturbed about her nomination as running mate to John Dramani Mahama since only head potters will recognize her.

According to the NPP’s Chief Scribe, the former Education Minister is not known by all and her popularity makes her unparalleled to running mate of the NPP, Dr. Mahamudu Bawumia, in terms of politics and governance.

“Let’s be fair with ourselves …from Makola through to TUC, nobody will wave at this woman. Send her to Chorkor or Bukom and ask her to walk on the street to Makola and see if someone will wave at her. Perhaps only the kayayei will wave at her. So on what grounds could this woman be compared to Dr Bawumia?” John Boadu is reported as saying.

John Dramani Mahama, Minority Women Caucus, NDC, NPP, Prof. Naana Jane Opoku-Agyemang, You are super; your work has made Ghana what it is today – Jane Opoku Agyemang to Kayayeis