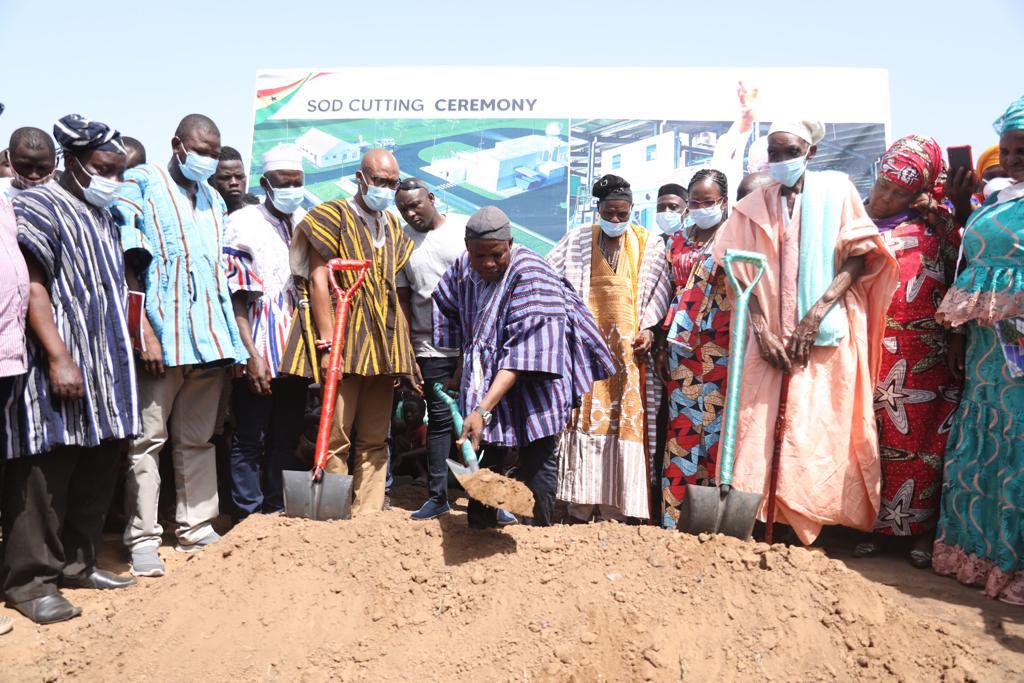 Work has begun on the construction of a €20-million solid and liquid waste treatment plants for the people of the Northern Region.

While the solid waste plant is expected to be completed within four months, the liquid waste facility will be ready in twelve months.

It follows the sod-cutting ceremony performed on behalf of President Nana Addo Dankwa Akufo-Addo by the Northern Regional Minister, Mr Salifu Saeed, at Gbalahi—a suburb of Tamale and where the two facilities would be sited.

According to the President, the projects were as a result of the reigning peace in Dagbon and for that matter the whole of Northern Region.

He said the completion of the projects will not only improve sanitation in the region, but equally enhance the people’s cleanliness, and thereby draw them closer to their Maker.

Poor sanitation, he said, goes with loads of health-related problems, thus stressing the importance for the people in the region to employ preventive measures to avoid being hit with diseases.

“This intervention is a health measure to help our health status of our people, therefore, the need to work together to ensure private partnerships” he averred.

On the benefits, the President said part of the waste would be turned into compost to enable farmers produce more food under the Planting for Food and Jobs programme.

“It will further support the government’s drive to tackle the sanitation problem in the country.

…As we all know cleanliness is next to godliness and so this project when completed will help our people in keeping their surroundings clean as there is a place to now recycle the waste from our homes,” the President stressed.

President Akufo-Addo reiterated his government’s commitment to partner with the private sector to tackle sanitation problems in the country.

For her part, the Chief Operations Officer (COO) of Jospong Group Florence Larbi, who also doubles as the Managing Director (MD) of Zoomlion Ghana Limited, disclosed that the project will help in recycling plastic waste.

While commending President Akufo-Addo, she said his commitment to ensuring a clean Ghana was very much appreciated.

“We as the leading waste management company in Ghana and other parts of Africa will continue to contribute our quota to make his vision for this sector a reality,” she assured.

According to her, the solid waste plant, is a 200-tonne waste treatment facility equipped with 21st century technologies in sanitation management.

“… and it aims to provide a sustainable solution to recover and recycle over 60% of the organic fraction of the waste into compost to boost the agricultural sector and support the Planting for Food and Jobs Agenda. Other recyclable materials will also be separated and processed for reuse,” she disclosed.

“Presently the region generates 183,000 tons of waste annually, most of which go into landfills making it hazardous to the citizenry. The facility has the potential of curbing this,” she added.

According to her, the second facility, the Tamale waste water treatment plant, will process about 1000 cm3 of liquid waste per day.

“Although the liquid waste generated in Tamale currently is between 400 to 500 cm3 (cubic meters ) per day, our aim is to build to a capacity that will serve Tamale and the surrounding MMDAS like Savelugu Municipal, Nantong District, Tolon District, Kumbumgu District, Mion District and beyond,” she disclosed.

The two projects, she revealed, were estimated to cost 20 million Euros.

Mrs Larbi used the opportunity to commend the Minister of Sanitation and Water Resources, Mrs Cecilia Abena Dapaah, adding that her outfit was also grateful to their partners, Komptech from Austria.

“To our landlords and land owners, the chiefs, elders, the people, municipal, metropolitan and district assemblies (MMDAs) of the Northern Region, we thank you very much for releasing the lands and providing the necessary support to ensure that the people of the region have a better and healthier environment,” she said.