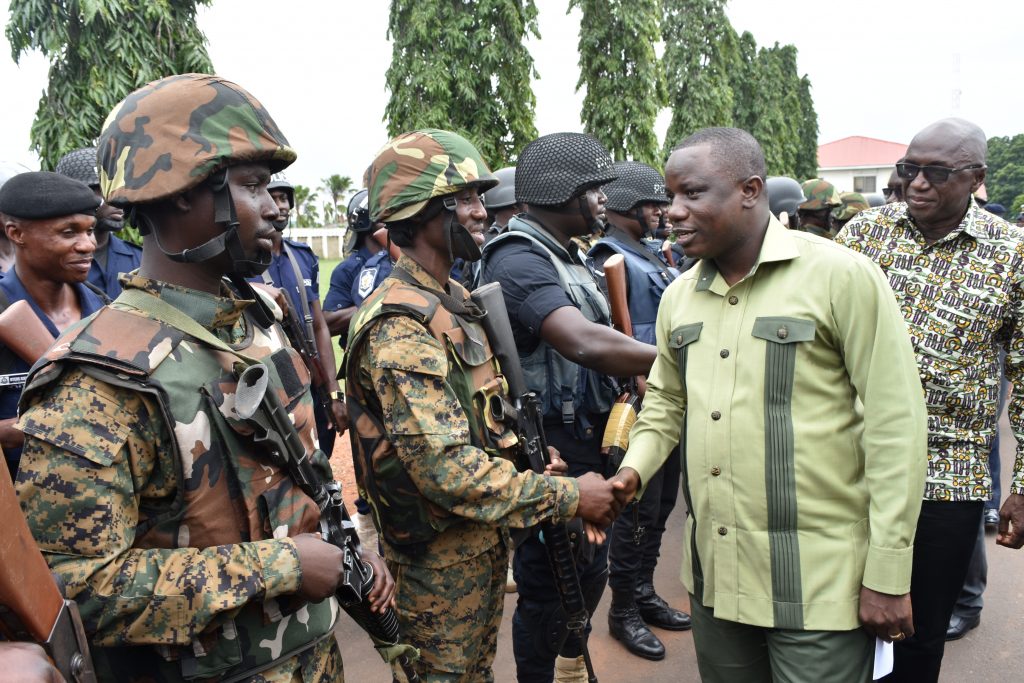 The Minister for Defense, Dominic Nitiwul, has told Parliament that the military will got it wrong in molesting civilians in the Upper West Regional capital, Wa, following a mobile phone theft case.

As a result of the actions of the soldiers, the Ghana Armed Forces (GAF) will take care of all the victims to demonstrate their remorsefulness and rekindle the military-civilian relationship that existed between them.

The move by the GAF, according to Mr. Nitiwul, will cover all the hospital bills of the victims as well as their feeding from the very first day they were admitted to the day that they will be discharged from the hospital.

In a video that has since gone viral, some soldiers from the 10 Mechanized Battalion on Thursday, stormed the streets of Wa and allegedly molested several people while injuring many in the process.

Twelve people were reported to have been rushed to the Wa Municipal Hospital with three said to be in critical condition. Several others are also reported to have sustained various degrees of injuries following a military assault.

One of the victims, a 29-year-old vulcanizer, Gafur Mohammed, is reported to have a fractured thigh and is unable to walk or sit up.

The action of the soldiers, the Defense Minister narrated, was triggered by a report the military received from a police officer that he had been hijacked at a knife point in a motor truck, popularly known in the south of the country as ‘pragia’, got beaten and his money and mobile phone seized.

The action of the soldiers, he noted, was wrong, stressing that a mobile phone theft shouldn’t be something to mar the “beautiful relationship” that exist between the men and women in uniform and that of the people of Wa.

Mr. Nitiwul, who is also the MP for Bimbilla, further told his colleague parliamentarians that the military High Command, having analyzed the situation, concluded that their men and women in uniform erred and have, therefore, sent a very high powered military delegation led by the Chief of the Army Staff, to the Overlord of Wa, the Wa Naa, to apologize to him and his people.

“Mr. Speaker, the military will apologize to the people of Wa for the molestation meted out to some of them. We have also identified all the people who were hurt during the incident and we will take care of them as well. I want to assure the people of Ghana for that”, he noted.

Mr. Nitiwul was responding to a matter of urgent public importance raised on the floor of Parliament on Friday, July 2, 2021, by the Minority Leader and MP for Tamale South, Haruna Iddrisu

The Tamale South lawmaker had told Parliament that military-civil relationship was at its lowest ebb, referencing the Ejura incident in which some lives have been lost as well as Thursday’s molestation of some civilians in Wa by some soldiers.

“Mr. Speaker, a civilian snatched a mobile phone of a man who was in mufti. Then subsequently, the military mobilized to the ring road leading to Kejetia Junction in Wa and you could see men of the Armed Forces beating and humiliating civilians. The rights and freedoms of those Ghanaians are guaranteed under the 1992 Constitution. Whatever grievances any of the Armed Forces has, we are a country governed by law and they cannot continue to take the law into their hands. We will not accept a state of lawlessness in this country by the military”, he narrated.

Order 72 of the Standing Orders of Parliament empowers Members to make a statement on a matter of urgent public importance and to seek a directive from the Speaker on such a matter.

Order 72 states that “By the indulgence of the House and leave of Mr. Speaker, a Member may, at the time appointed for statements under Order 53 (Order of Business) explain a matter of personal nature or make a statement on a matter of urgent public importance. Any statement other than a personal statement may be commented upon by other Members for a limited duration of time not exceeding one hour. The terms of any such proposed statement shall first be submitted to Mr. Speaker.

Mr. Nitiwul commenting further, welcomed any probe into the matter by Parliament but pleaded with Members to measure their utterances when commenting on the Wa incident as well as any matter bothering on military-civilian relationship.

“We should be a bit tempered in matters of this or in our utterances when it comes to matters like this. We are building a democracy and the military are part of that. I can the military are an integral part holding the democracy that we have”, he emphasized.

On Friday, the Ghana Armed Forces in a statement signed by its Director of Public Relations, Col. E. Aggrey-Quashie, served notice that internal disciplinary measures have been instituted to deal with the soldiers involved in molesting civilians in Wa.

Besides that a high powered military delegation led by the Chief of the Army Staff, have been set up to critically probe the matter and to also explore means to assuage the anger of the people and promote good neighbourliness.

The First Deputy Speaker of Parliament, Hon. Joseph Osei Owusu, who presided over the sitting, having listened to the submissions of the Minority Leader and the Minister for Defense, directed the Committee on Defense and Interior to investigate the matter and report to the House within four weeks.