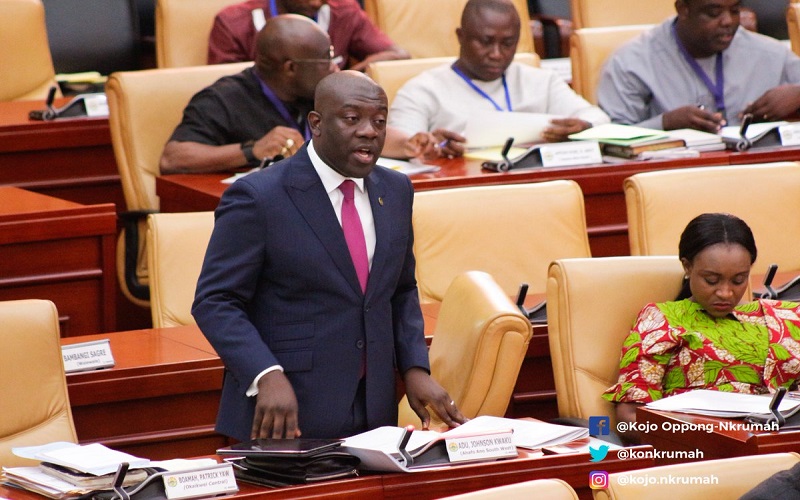 The Minister for Information, Kojo Oppong Nkrumah, has revealed that a total of 85 requests were made for information during the first year (2020) of implementation of the Right to Information (RTI) Law.

This follows the submission and analysis on the annual reports on RTI activities by 219 public institutions.

Per Section 3(1) of the RTI Act, each public institution is required to compile and publish an information manual to document the nature and scope of information that may be accessed by an applicant within that institution.

Mr. Nkrumah, who is also the New Patriotic Party (NPP) Member of Parliament (MP) for Ofoase Ayeribi, made this revelation when he delivered a statement on the implementation of the RTI Act, 2019 (Act 989) on the floor of Parliament on Thursday, July 1, 2021.

The RTI Act, is an Act to provide for the constitutional right to information held by a public institution, subject to the exemptions that are necessary and consistent with the protection of the public interest in a democratic society.

The Act seeks to strengthen democracy, open governance, and sustainable development. The RTI Act (Act 989) was passed by Parliament and assented to by President Nana Addo Dankwa Akufo-Addo on May 21, 2019.

Section 86 of the Act makes provision for the commencement of RTI implementation across public institutions by January 2020.

According to Mr. Nkrumah, during the year under review, a total of 285 public institutions were found to have complied with Section 3(1) of the RTI Act.

Touching on the number of public institutions implementing the RTI Law, Mr. Nkrumah said at the beginning of year 2020, 539 public institutions comprising 263 Ministries, Departments and Agencies (MDAs) and 260 Metropolitan, Municipal, District Assemblies (MMDAs), and 16 Regional Coordinating Councils were captured in the database of the Ministry of Information as institutions required to implement the RTI Law within the country.

“As part of transitional arrangements, a dossier comprising the Act, Standard Operating Procedures and Application Forms were distributed to all Sector Ministries, Local Government Institutions, and Independent Public Institutions. These documents were resource materials modelled around sections 5-19 and 23-25 of the Act 989 and designed to assist public institutions to implement the law gradually from the beginning of 2020 until such a time that the internal processing systems and structures were fully put in place”, he noted.

According to him, the period January to December 2020 recorded a total of 478 Information Units set up across the 539 institutions in accordance with Section 3(3) (b) of the Act. A total of 1,055 Officers of the Public Services were also engaged to play various roles in the implementation of the RTI Act, he added.

“This comprised 478 designated RTI Officers, 478 Records Officers and 99 recruited Information Officers who were trained and resourced to facilitate the processing of requests received by the institution”, he explained.

Commenting further on the implementation of the law, the Information Minister said the year 2020 also experienced some challenges including the impact of COVID-19, delays by public institutions in submitting required documents, transfers of designated officers resulting in the loss of institutional memory regarding the RTI Act, and non-compliance by some public institutions.

However, to address these challenges and build on the gains made, Mr. Nkrumah said his outfit through the Access to Information (ATI) Division of the Information Service Department (ISD) has outlined a number of activities for subsequent years of implementation. These include: