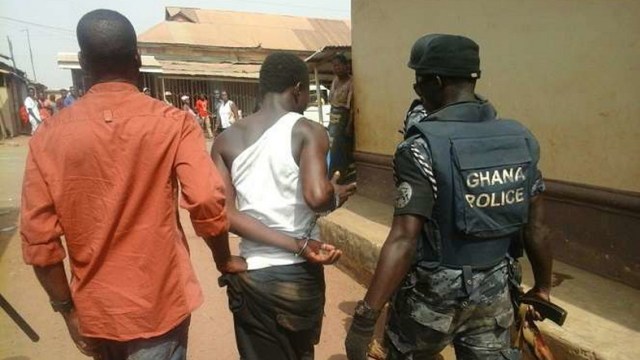 About thirteen macho men and land guards said to be working for the National Democratic Congress’ (NDC) Member of Parliament for Ajumako-Enyan-Essiam (AEE) constituency in the Central Region, Hon. Casiel Ato Forson, have been arrested and put behind bars.

They were arrested by a joint military-Police taskforce on Sunday, July 26, 2020, at their hideout in YAN Guest House in Mankesim following an intelligence picked by the security operatives.

They were sent to the Central Regional Police Command but were later brought back to Mankesim where a search was conducted in the rooms they were occupying in the guest house.

Some military accoutrement and other items were retrieved in the process. The suspects have since been sent to the Central Regional Police Command for further investigations.

The group said to be henchmen of Hon. Casiel Ato Forson have since the beginning of the ongoing voters registration exercise, allegedly been terrorizing prospective registrants, especially, those perceived to be members and sympathizers of the governing New Patriotic Party (NPP), from registering in the Ajumako-Enyan-Essiam constituency and adjourning constituencies as well.

They have been moving in and out of the Ajumako-Enyan-Essiam constituency to avoid being identified and reported to the Police for arrest. The YAN Guest house has been their place of abode and where they initiate their nefarious activities from.

On Wednesday, July 8, 2020, the group were said to have attacked and prevented perceived members and sympathizers of the NPP from registering at one of the polling stations where the voters registration exercise was being carried out.

That same day, the group were said to have aided the escape of the Ajumako-Enyan-Essiam constituency NDC Youth Organizer from another polling station after firing some gun shots to scare off perceived members and sympathizers of NPP from registering.

Some of the these macho men and land guards, are said to have masterminded the attacks on the Minister for Presidential Special Initiatives and Development and NPP MP for Awutu Senya East constituency, Hon. Mavis Hawa Koomson.

Some residents in the constituency say their MP has a history of violent attacks on members and sympathizers of the NPP during situations like this.

For example, during the 2016 electioneering campaign, one Mr. Okyere, a known NPP executive member in the constituency who was having a meeting with some members of the elephant family, was allegedly attacked by Hon. Forson’s henchmen. In the process, his car and some belonging to the party members were allegedly burnt into ashes.

Our sources in the constituency say residents and security operatives have had a very torrid time monitoring the group to cause their arrest for unleashing terror on them.

Their movements in Mankesim also became very suspicious, with some informants within the enclave where the YAN Guest house is located, alerting the Police on Saturday night that one of the political parties had bussed and camped about 100 people in the guest house who were seeking to register in the ongoing voters registration exercise.

A joint military-police taskforce were quickly dispatched to the guest house where they were met with the shocking revelation that their suspects were rather macho men and land guards who were allegedly working for Hon. Ato Forson, a former deputy Minister of Finance.

Eyewitnesses say the hoodlums initially tried to resist arrest but later gave in with the exception of their leader named Ali who locked himself up for over an hour before surrendering to the security personnel.

According to our sources inside the police, Ali while indoors, placed several calls to Mr. Ato Forson and other NDC apparatchiks in the region and other places to inform them about their arrest.

The Central Regional NDC Chairman, Lawyer E. K. T. Addo together with some other executives of the party, our sources added, made several attempts on Sunday, July 26, 2020, to secure bail for the hoodlums but to no avail.

The thugs, we understand, will be sent to court on Monday, July 27, 2020, where they are expected to be remanded in police custody to assist with further investigations.