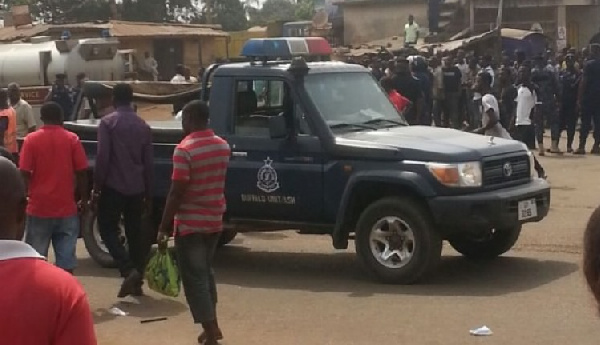 Nigerian residents in Gomoa Buduburam in the Central Region are up in arms with the Ghana Police Service following the death of one of their members.

The young Nigerian man identified as Walter Billions, was fatally shot by a Police officer, Saturday dawn, triggering the anti-police protest in the area.

The Kasoa District Commander, Superintendent Samuel Odame, who confirmed the incident to local media said the deceased was shot after threatening to harm some police officers who were called to the area to restore calm after he had run amok in the late hours of Friday, July 17, 2020.

“Apparently when the patrol team got there the first police officer who got down was chased but for God intervention he would have been killed by this person. So the team had to use force to prevent any unfortunate incident and unfortunately what happened is what you’re aware of,” the Police Chief narrated.

He added “The attempt was to disable him and not to kill him but post mortem is still going to be done”.

The Nigerian Community in the Gomoa Buduburam enclave are not happy with the incident which comes just days after a diplomatic roar between the two countries.

A leader of the community, Emmanuel Chukuamaka Azebuake, according to www.dailymailgh.com report, has described the shooting incident as uncalled for since the deceased was mentally deranged.

He said the incident has been reported to the District Police Commander for investigation.

“I was able to call our Nigerian High Commission and inform them about what has happened and I was instructed to follow the due process of the law which is reporting to the District Police Commander.

“He has assured me that the culprits will not be left just like that. Right now, the boys are angry. If he had intentions of harming people, he would have. For now, we are all waiting to hear what the Police and the Ghana government will do about this,” he told Accra-based Citi FM.