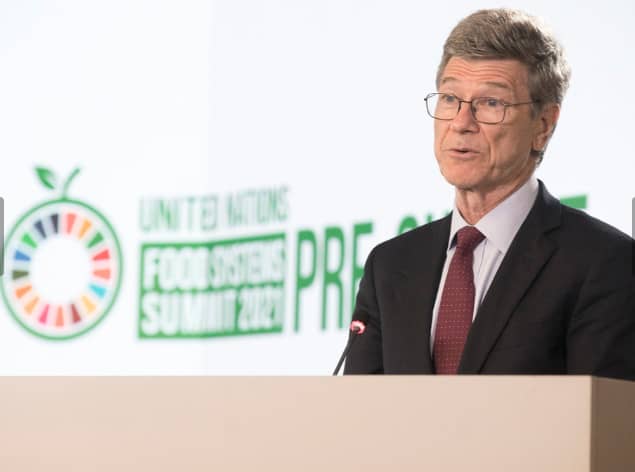 The Special Advisor to the Secretary-General of the United Nations (UN), Prof. Jeffrey Sachs, has called on governments of the western world that make up the G20, to make the African Union (AU) one of its members, just like it did to the European Union (EU), a bold statement many had thought should have come from an African President.

The controversial request which has come to many as a surprise considering that Prof. Sachs himself is a westerner, when granted, will see the G20 become G21.

The move, according to the SDGs Advocate, will bring a representation of a population of about 1.4billion to the table which will help change discussions at the international forum.

“The G20 should become G21 by inviting systematically, the Chairperson of the African Union and the African Union to be the 21st country. The European Union is a member of the G20. As the EU, if you add the AU as the 21st country, you add 1.4billion people to represent them and that is crucial. That will change decisively, the discussions because 1.4billion people are not at the table for finance right now and they need to be so. I love G20, just add one seat – thus 1.4billion people with the AU represented”, he noted with the gathering applauding him for such a bold statement for inclusion.

Jeffrey Sachs was contributing to a discussion on “Accelerating the critical transitions required” at the UN Food Systems Pre-Summit which was held in Rome, Italy from July 26 – 28, 2021. The pre-summit was to set the stage for the culmination of the global event in September 2021 by bringing together diverse actors from around the world to leverage the power of food systems to deliver progress on all 17 Sustainable Development Goals (SDGs).

The aim of the UN Food Systems Summit is to maximize the co-benefits of a food systems approach across the entire 2030 Agenda and meeting the challenges of climate change.

Explaining the rationale behind his request, Prof. Sachs, who is also the Director, Center for Sustainable Development, Columbia University, said the world has not seen much of the development it so desires because of the neglect of poor countries.

Rich countries are always pursuing their interest and living the poor countries behind, a situation he noted, must change with a different system which has to be based on principles of human dignity in the universal declaration; principles of sovereignty and principles of economic rights.

Commenting further, Prof. Sachs underscored the need for an order of magnitude change of development finance, stressing the need to increase lending and borrowing capacity of poor countries at zero percent coupon rate just like the rich countries have.

With concerns of non-availability of COVID vaccines in poor countries in his mind, Prof. Sachs again called on the vaccine manufacturing countries like the United States of America, Russia, United Kingdom, China and the European Union to allocate the vaccines rather than hoarding them.

He also called for heaving financing of the United Nations to be the core and central institution to solve the myriads of challenges confronting the world, insisting “that is the only way we are going to have a civilized world. It cannot be that a whole UN budget is less than New York City’s budget. The UN’s core budget is US$3billion. New York City’s budget is US$100billion and then we say why don’t things work well? Because the rich are hoarding everything”.

Further to this call, he said there is the need to tax more, individuals and institutions, which are making more money in order to have a civilized world.

The Executive Director of Millennium Promise Alliance (MPA), Chief Nathaniel Ebo Nsarko, who also monitored the event live when contacted, said Prof. Sachs’ call was a step in the right direction, urging African leaders to follow up on this historic move and ensure that AU is included in the G20 to make it G21.

“Prof. Sachs’ statement has indeed shaken the foundations of the western world. In the coming days, I expect leadership of the AU to explore all possibilities to make a strong case for the continent to join the world powers during these strong decision making dialogue and change our fortune”, he noted.