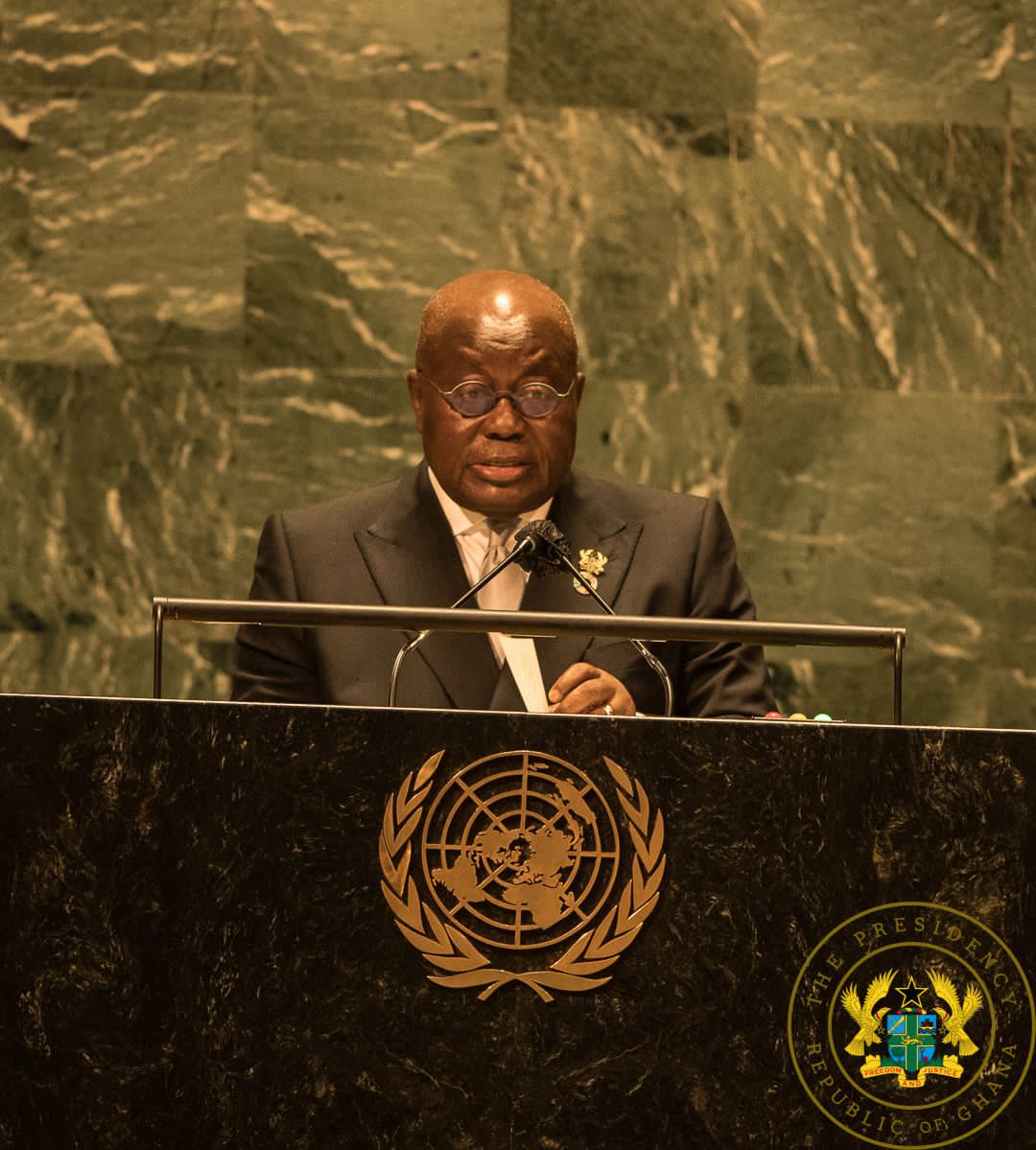 The President of the Republic of Ghana, Nana Addo Dankwa Akufo-Addo, has told world leaders, especially those who make up the Group of 20, to admit the African Union (AU) into their fold to become the 21st member state, a proposal which was first championed by Prof. Jeffrey Sachs, Adviser to the UN Secretary-General on Sustainable Development Goals (SDGs).

“Admitting the African Union to an expanded G21 would have the same galvanising effect within Africa that the EU’s participation in the G20 has within Europe, strengthening policy co-ordination and coherence across the fifty-four (54) African economies”, he noted.

President Akufo-Addo made this observation on Wednesday, 22nd September 2021, when he took his turn to address the 76th Session of the United Nation’s General Assembly, in New York, in the United States of America.

According to him, “with the African Union at the table, the group suddenly would have representation for fifty-four (54) more countries, 1.3 billion more people, and $2.3 trillion more output. This extraordinary increase in representation will add just one seat to the table, and about ten minutes to the discussion.”

The President was, however, confident that it will redefine global policy co-ordination to enable a more prosperous, inclusive and sustainable world to emerge.

Reiterating the commitment of Africa in the fight against Climate Change, he maintained that “the fight is better-advanced if we are able to maintain the crucial balance between economic, political and environmental imperatives – positions that we will be articulating in Glasgow, at the COP 26 Conference, which should form part of the new Global Compact.”

Time for Africa Marshall Plan
The President stated that even before the pandemic outbreak, many had concluded that the current structure of global economic co-operation, designed some 77 years ago, has proven inadequate to finance infrastructure and economic transformation in developing countries.

According to him, “given the incapacity of the global financial system to produce the necessary outcomes to finance sustainable development, we need a constructive review. COVID-19 is a historic opportunity to rethink global economic co-operation, based on all economies of mutuality, equity, sustainability, and collective prosperity.”

COVID-19, the President said, has resulted in decreased revenues to the tune of some $150 billion, with African economies still reeling from the economic impacts of the pandemic.

“African governments have already spent scarce reserves fighting the pandemic, and providing social protection to millions of affected households. Ghana has been advocating that innovative financing must also address structural challenges beyond responding to immediate fiscal needs, by providing mechanisms to facilitate investments in health infrastructure, technology, the environment, and people that would bolster resilience and equitable recovery,” he said.

President Akufo-Addo noted that the International Monetary Fund’s historic $650 billion SDR allocation should be seized upon as a catalytic effort to leapfrog Africa to the next level of human development, and ensure sustained global prosperity.

“African leaders have advocated for a prudent and transparent channelling of at least twenty-five to thirty-five percent (25%-35%) of SDRs, that is one hundred and sixty to two hundred and thirty billion dollars, from wealthier to vulnerable countries, one hundred billion dollars ($100 billion) of which should be dedicated to Africa. We welcome the support of the European countries, represented at the Africa Summit in France, the IMF, the G7 and G20, to some SDR redistribution,” he stressed.

The President continued, “The IMF’s historic $650 billion SDR allocation offers a unique opportunity to provide additional financial resources to address the vast and surging inequities the pandemic has laid bare, and a crisis to come. Africa’s allocation is some thirty-three billion dollars ($33 billion). If there was ever a time for an African Marshall Plan, it is now!”

The Marshall Plan, officially the European Recovery Program, ERP) was an American initiative passed in 1948 for foreign aid to Western Europe. The United States transferred over $13 billion (equivalent of about $114 billion in 2020) in economic recovery programmes to Western European economies after the end of World War II.

Proceeds of channelled SDRs, President Akufo-Addo reiterated, should fund vaccine acquisition and manufacturing, climate and green investments, and a pan-African Stability Mechanism like the European Stability Mechanism, that would safeguard financial stability on the Continent.

A part of the redistribution, he added, should also fund the recapitalisation of the African Development Bank and Afreximbank to support industrialisation, private-sector job creation and the African Continental Free Trade initiative.