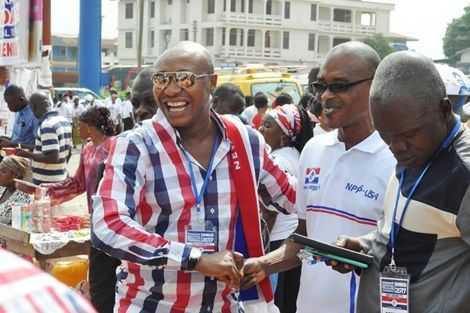 Some aggrieved sympathizers of the governing New Patriotic Party (NPP) have sent a note to the Central Regional Chairman of the party, Mr. Robert Kutin, demanding an immediate action over the matter of an alleged criminal conduct against his First Vice-Chairman, Mr. Horace Ekow Ewusi.

Failure to act on the matter, according to the aggrieved followers of the Danquah-Busia-Dombo tradition, will leave them with no option than to embark on series of demonstrations against all the regional and national executives of the party.

In the view of the aggrieved supporters, it is very important for the leadership of the NPP in the Central Region and by extension, the national executives, to show leadership in this crisis moment by ordering Mr. Ekow Ewusi to step aside and fight to clear himself from all the allegations of criminality levelled against him by one Edward Okraku Adum, an ex-convict who is also a member of the elephant family.

“This is a simple straight forward decision. An allegation of defrauding by false pretense and jail break have been leveled against no other person than our First Vice-Chairman in the region, Horace Ekow Ewusi. This is a very serious matter and I expect our regional Chairman, the one and only Chairman Kutin, together with the other executives to immediately act on the matter. They should suspend Ekow Ewusi to give him enough space to clear himself. If Chairman Kutin and his men fail to act, they will see the other side of us”, Kofi Andoh, a resident at Hemang who is a sympathizer of the party told this portal in an interview.

Helena Awotwe, also a sympathizer of the NPP and a resident of Jukwa in the Central Region told this website that “The allegations levelled against Ekow Ewusi is denting the image of the party and I expect Chairman Kutin and his executives to suspend him until he clears himself of any wrongdoing. Chairman Kutin, this is the time to show leadership and we are with you else we will launch series of protest against you”.

Edward Okraku Adum, who served a jail term at the HMP Prison in the United Kingdom for drug trafficking is demanding the head of Ekow Ewusi.

He has in a petition addressed to the National Security Minister, Albert Kan-Dapaah, and copied President Nana Addo Dankwa Akufo-Addo, the UK High Commissioner to Ghana, National Chairman of the NPP, Freddy Blay, and Chairman Kutin, called for the  immediate removal of Mr. Ewusi from office.

He wants the vociferous Central Region First Vice-Chairman of the NPP and a member of the Inter-Ministerial Committee on illegal mining to be probed, prosecuted and jailed if found culpable since he is not fit for the positions he is occupying both in the party and in government.

Adum contends that Mr. Ewusi has allegedly defrauded him of an amount US$10,000 by false pretense.

“Mr. Horace Ekow Ewusi was my colleague at the Ford Prison in the United Kingdom where I had also been convicted to serve a three year jail sentence for drug trafficking. Because he was a Ghanaian, I took him as a brother. We did everything together in the prison as brothers. It is important to know that, Mr. Horace Ekow Ewusi’s name was Mr. Horace Brown at the prison ward when I met him. The HMP Ford Prison is a low class prison for first time offenders and work force and those who want to better their lives. It was more like a rehabilitation center. That was where I met him and got to know him. He subsequently became my younger brother and a friend because we were all Ghanaians which I helped him to get the chance to go to the College which I was then attending. The name of the school is called Northbrook College in the south coast heading towards Brighton. It is situated 20 miles away from the Prison House”, he explained.

Ever since the issue came to the public domain, some sympathizers of the NPP who are worried about the harm done to the party want immediate measures to be put in place to save the image of the elephant family from further sinking, especially, as election 2020 approaches.

Albert Asare, a resident of Moree in the Abura-Asebu-Kwamankese constituency and a sympathizer of the NPP further told this portal that he can’t wait for Mr. Ekow Ewusi “to be dropped from the regional executives” in order to save the image of the party.

It therefore remains to be seen what action the leadership of the NPP in the Central Region will take against their own whom sources say is untouchable.