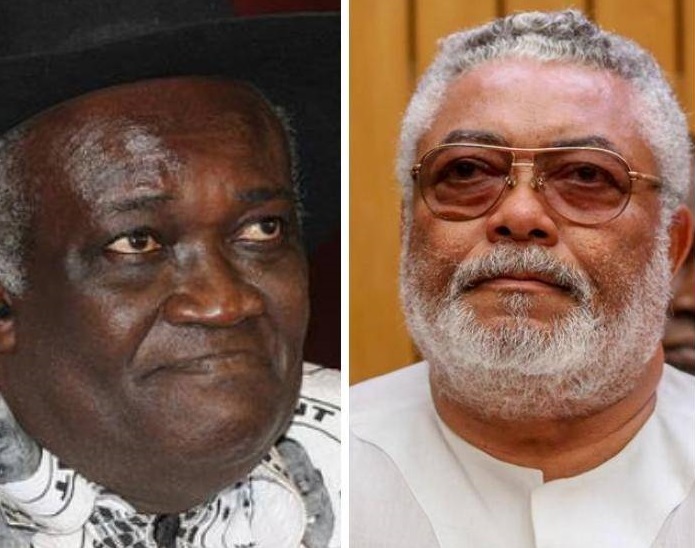 It appears the former President of the Republic, Jerry John Rawlings, is not done with Prof. Kwamena Ahwoi following the out-dooring of his book titled ‘Working with Rawlings’, which has become the centre of controversy in recent times as far as the former’s presidency is concerned.

The two-day event beginning on Friday, September 4 to Saturday, September 5, 2020, will see the former President address the Conference as the Guest Speaker at the GNAT Hall, Accra-Central.

The theme for the Conference is ‘Shared Leadership for National Transformation, Human Empowerment and Anti-Corruption’.

Snippets of information gathered by www.politicoghana.com suggests that Rawlings will use the occasion to take a swipe at Prof. Ahwoi by throwing more light on what the former Minister of Local Government and Rural Development did when the pair were in government from the 80s to January 7, 2001.

Our sources say Rawlings has more information under his sleeves to share with the public as far as his working relationship with Prof. Ahwoi is concerned.

Prof. Ahwoi in July, 2020, released his new book titled ‘Working with Rawlings’ in which he lays out what it was like working with the former Ghanaian Head of State, Jerry John Rawlings.

However, a section of the content of the book, especially, those that deal with the kind of treatment the late Prof. Atta-Mills received from the hands of the former Ghanaian leader, has not gone down well with Rawlings, aspects he claims, are fabrication and grapevine accounts to paint a denigrating picture about his personality.

Mr. Rawlings in late August responded to such remarks, recalling how in truth, he consistently supported Prof. Atta-Mills from the year 2000 to the year 2009 when he became President of the Republic.

“The book is generously economical with the truth given that President Rawlings supported President Mills consistently from the year 2000, much to the chagrin of many of those who morphed into his post-victory supporters in 2006. After his landslide victory in the 2006 NDC primaries, candidate Mills travelled to South Africa for medical treatment. While in South Africa, Mills put a call through to President Rawlings and indicated his desire to forego the candidature for the presidential election owing to his medical state. Following this conversation, President Rawlings held a meeting with some leading members of the party to express concern about the state of candidate Mills’ health, and urged them to identify recognizable party members who could step in. President Rawlings is on record as having suggested that some known personalities in the party should position themselves to demonstrate that the NDC had enough Presidential materials”, he noted.

He added “Bizarrely, Kwamena Ahwoi has written a lengthy diatribe about how Rawlings coerced his brother, Ato Ahwoi, to contest Mills ahead of the primaries, leading to the breakdown of their healthy relationship. It should be stated on record, that President Rawlings took the responsible and pragmatic approach after he received that politically unnerving call from Prof. Mills. He consulted the Party leadership to take strategic steps to fill the gap which Prof. Mills’ account was imminent. Urging some members of the party to position themselves for a potential contest, was in no way an attempt to undermine, sabotage, betray or malign Prof. Mills as the author shamelessly infers in his book”.

It remains to be seen whether Rawlings, also known as ‘Dr. Boom’ will boom at the NDP Conference with Prof. Ahwoi being his main target as he has never disappointed on matters like this.