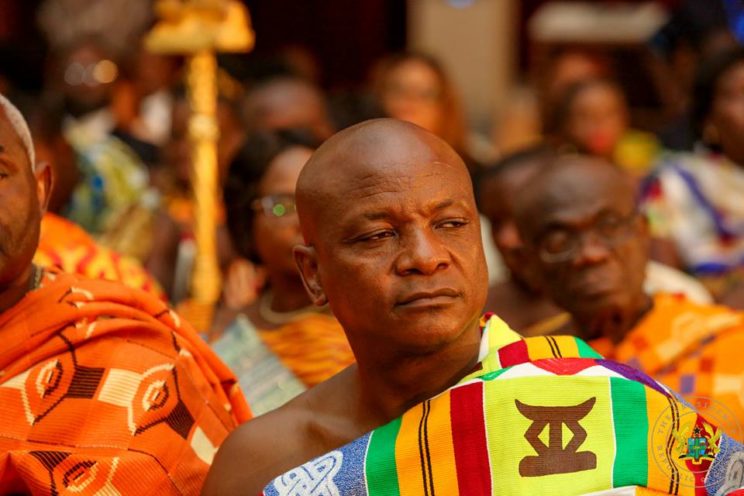 The President of the National House of Chiefs, Togbe Afede XIV, has called on the public to disregard publications purported to have emanated from the House of Chiefs condemning comments made by the National Democratic Congress’ flagbearer John Dramani Mahama on the Agyapa Royalties controversy.

According to the Agbogbomefia of the Asogli State, the publication which made rounds Tuesday is extremely mischievous, untrue and must be disregarded.

Togbe made the statement while addressing a sitting of the Volta Regional House of Chiefs on Wednesday, 2nd September 2020.

He said, “I want to use the opportunity to condemn without reservation and in no uncertain terms, three fake publications -two of which in the name of the Volta House of Chiefs and the third one in the name of the National House of Chiefs. In the first publication, the Volta house of chiefs were alleged to have blasted the NDC and alleged that we have said that we are tired for the NDC. The second one was labeled “Announcement to all Voltarians,” which was supposedly from Volta chiefs to the effect that, since 1992 the Volta region has supported the NDC party because of former President Jerry John Rawlings and that we have nothing from our support.”

“I have issued a press statement in the name of the Asogli State to disassociate myself from those publications because some of the came with my picture so we have written deny that any such statement was issued by Chiefs of the Volta region,” he added.

On the Agyapa royalties controversy, Togbe Afede noted that neither the house of chiefs nor himself has made any comments on it.

“But only yesterday, a third one made the rounds and was carried by various channels Ghanweb, Myjoyonline, Graphic Online et cetera; some of them probably found out later that it was fake and they promptly removed same. It was titled: “House of Chiefs condemned ethnocentric comments shared by John Dramani Mahama.” Again, this publication came with my name but this one went further to forge the letter head of House of Chiefs. This is extremely mischievous and needs to be condemned without any reservations and in no uncertain terms,” he said.

Togbe stated that he felt hurt by attempts to use his name to legitimize the Agyapa royalties agreement, while stating that the case has been reported to the police for action to be taken on such forgeries.

“I, in particular, I’m very much hurt by the attempt to use my name to grant legitimacy to a transaction that has been widely condemned for its secrecy and for the fact that the company involved [Agyapa] was incorporated in a tax haven. I do not see why desperation would lead anybody associated with that transaction to want to use the name of the innocent Togbe Afede XIV. I have never commented on this transaction and I have decided not to comment for good reasons,” he stated.

Commenting further on the deal, Togbe Afede said, “Even the Attorney General has issued a statement that showed disapproval on this transaction. Tax havens basically serve two purposes; helping you to avoid tax or ensure secrecy, I don’t see why a national transaction should become a secrecy in the first place.”

On Friday, August 14, 2020, President Akufo-Addo caused seven agreements relating to the Minerals Income Investment Fund (“MIIF”) to be laid before Parliament for approval.

The Agreements seek to mortgage Ghana’s future mineral royalties and long term national assets. Through this transaction, the Akufo Addo government intends to use a Special Purpose Vehicle (SPV), Agyapa Royalties, incorporated as an offshore company in Jersey, in the Channel Islands, a known tax haven, in exchange for an upfront amount of ¢500 million, under the Mineral Development Fund Act, 2018 (Act 978) and its amendment Act, which was yet to be assented to by the President in accordance with article 106 of the 1992 Constitution to make it law. The Government of Ghana will own 51 per cent of the shares of the company and remaining 49 per cent floated on the London Stock Exchange.

As a result, the minority in Parliament has condemned the deal saying that it is shrouded in secrecy and in disregard to its implications on future national revenue streams, a position that has been shared by a couple of Civil Society Organizations.

The NDC has so far served notice that it will disregard the deal should they win the 2020 general elections.