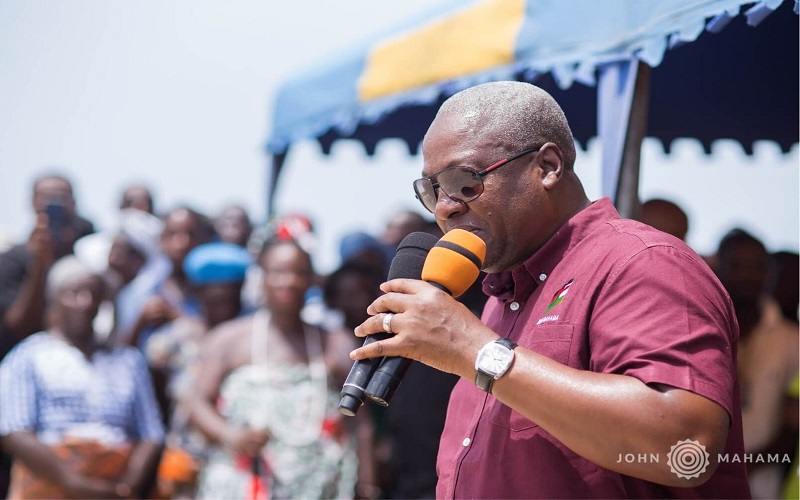 He is also demanding that President Akufo-Addo produces the report of an audit he claimed was conducted on the project.

Addressing a durbar of chiefs at Bopa in the Sefwi Akontombra District of the Western North Region, Mr. Mahama said Mr. Akufo-Addo and the NPP, because of politics, stopped the ongoing road projects, leading to a neglect of the roads for almost four years, and eroding the progress already made on those roads.

Mr. Mahama, who is the Flagbearer of the National Democratic Congress (NDC) said he doubts the existence of any audit report.

“They should tell us the findings. Which contractors were paid for work they had not done? But there is no such report. Because of politics, you abandon the roads and now that it’s close to elections, you’re now scrambling to fix roads. Meanwhile you had four years to do so” he disclosed.

Explaining the reason for instituting the cocoa roads project, the NDC Leader said his government observed that the cocoa growing communities had some of the poorest roads in the country and together with Cocobod, agreed to vote $150 million of cocoa proceeds annually into constructing roads for those cocoa growing areas.

He therefore assured the people that the NDC, when it wins the December 2020 elections will complete the abandoned cocoa road projects.

The NDC leader also promised that his government will restore the free fertilizer programme for farmers, that was cancelled by the NPP and also reintroduce the free seedlings for farmers to shore up cocoa production that had reduced from 967,000 tons during the NDC era to 700,000 tons currently.