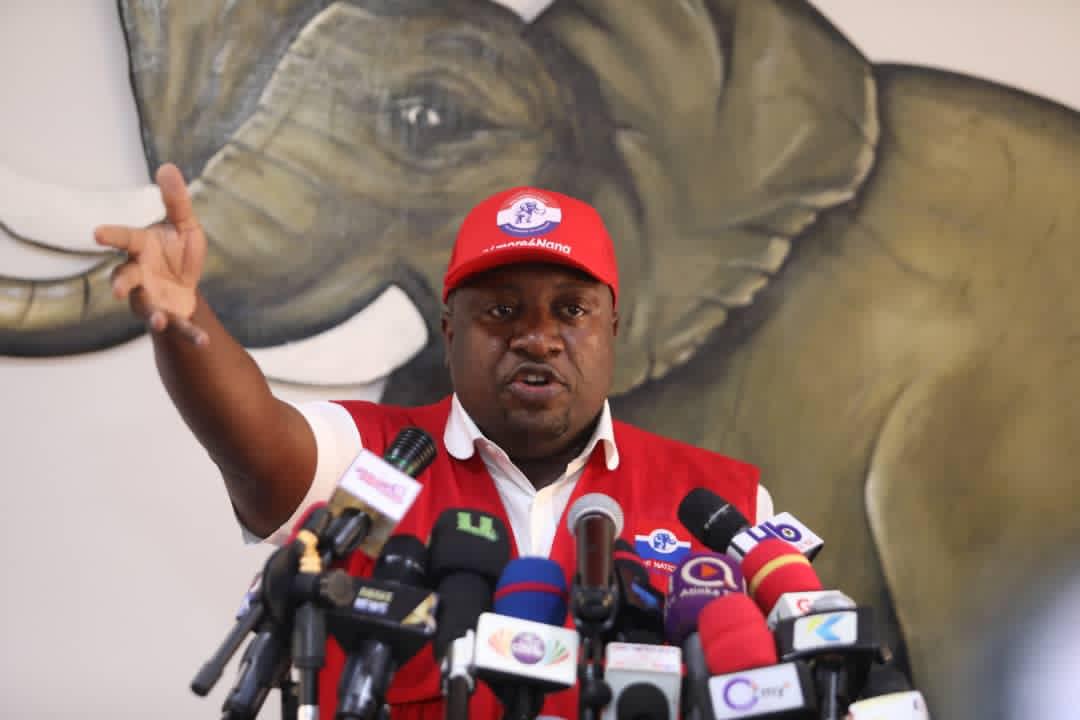 Mahama’s attempt to associate himself with the policy was “driven by ill-faith, deception and opportunism” borne out of his “innate tendencies to harvest what he didn’t sow,” the national youth organiser of the NPP, Henry Nana Boakye said at a press conference,Thursday, December 3, 2020.

The presidential candidate of the NDC claimed during a recent campaign event that he started the free-fee education policy in 2015.

A major campaign promise by the then opposition leader, President Akufo-Addo, the free SHS policy was launched in 2017.

A little over 400,000 students benefited from the policy in its first year of implementation.

“Under the holistic and impactful Free SHS policy of President Akufo-Addo, tuition is free; admission fee is free, library fee is free; science center is free, computer lab fee is free; utility fee is free; textbooks are free; boarding fee is free; nutritious meals are given for free to both Boarding and Day Students,” Nana Boakye said.

He said to date, over 1.2 million students have benefited from “the president Akufo-Addo Free SHS programme which has expanded access to secondary education and enabled an extra 400,000 students to enrol in senior high schools, whose education would have been truncated had this programme not been implemented by the NPP Government.”

According to WAEC, 2020 is the only year in the past six years that more than 50% of candidates obtained A1 – C6 in all core subjects areas.  “This clearly demonstrates that quality was not compromised in implement the Akufo-Addo’s Free SHS programme,” he said.

According to the NPP youth organiser, Mahama’s attempt to steal free SHS idea of President ended in the shambolic SHS subsidy of a paltry GHS38.94 from GHS405.50 fees per term.

He explained: “What this meant was that, Day Students who were the only beneficiaries had to pay an average of GHS370 school fees each term. This was woefully insignificant and couldn’t reduce the number of qualified students who were unable to go to SHS upon gaining admission and also students who dropped out as a result of poverty. Let me hasten to add that, under this lame subsidy, Boarding Students who were in the majority paid full fees and other related expenses.”

He said the NPP government, in 2017, inherited huge debts at the Education Ministry as a result of the shambolic attempt by Mahama to implement his progressive free SHS saying: “It is instructive to note that, the little over GHS30 million cost associated with the SHS subsidy under the Mahama government was not paid. The NPP government upon assumption of office, had to clear up the arrears and clean up the mess. It is therefore shameful for Candidate Mahama to tout a failed policy he was unable to fund.”

Touching on the last minute education policies announced by the NDC, Nana Boakye said “this an ill-conceived campaign promise, smuggled through the back door to add up to the litany of their failed and uninspiring manifesto promises.

“The shambolic FA NINYINAA promise, being the last straw that the NDC desperately seek to anchor their drowning campaign on, barely a week to the elections, is not only a propaganda tool but also a sickening scam directed at downplaying the intelligence of voters.”

He said the NDC has, over the period, said that their 2020 manifesto contains programs and policies proposed by the People of Ghana.

But the ‘KYEMUPE’ promise which Ghanaians were made to believe that it was a true and accurate reflection of the aspirations and needs of the ordinary Ghanaian has conspicuously changed.

“Isn’t it strange that the people who supposedly asked for ‘KYEMUPE’ at a delicate period when COVID-19 had slowed economic activities, would vary their demand and ask for ‘FA NINYINAA’ when economic activities have picked up momentum according to reliable data from Ghana Statistical Service and Bank of Ghana? The flip-flop disposition of candidate Mahama and his NDC tells us that they are confused, bereft of ideas and desperate to win political power with plain lies, fabricated falsehood and deceptive campaign promises,” he said.