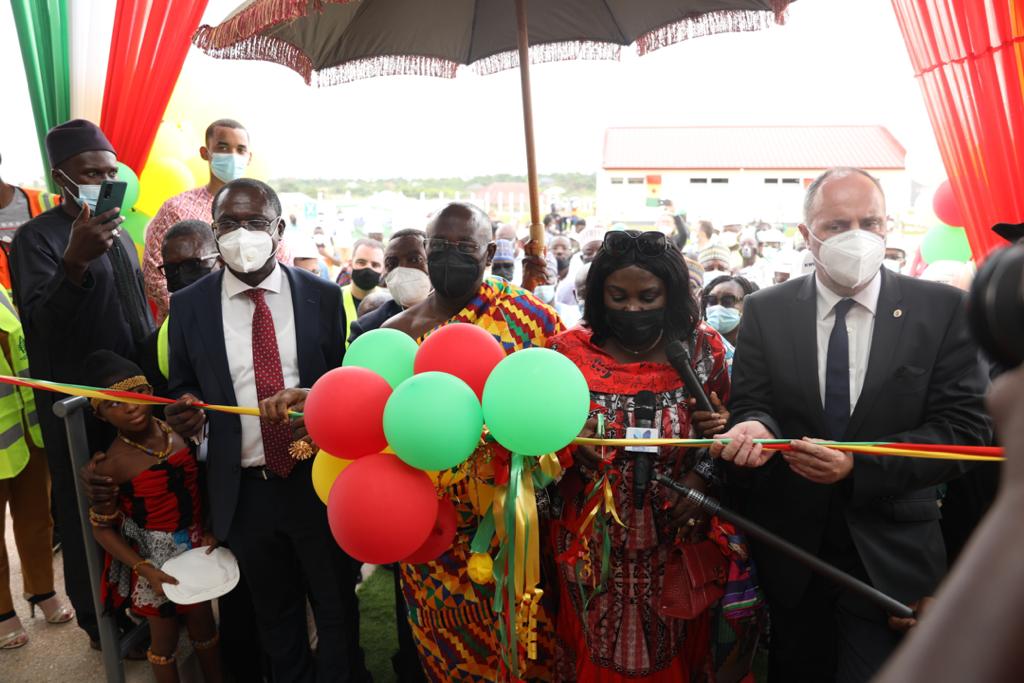 The Minister of Sanitation and Water Resources (MSWR), Madam Cecilia Abena Dapaah, has commissioned a new state-of-the-art Kumasi Wastewater Treatment Plant (KWTP) at Adagya in the Bosomtwe District in the Ashanti Region.

The 20-million Euro plant, with a capacity of 1,000 cubic metres per day, was through the collaboration between the governments of Ghana, Hungary and the Jospong Group of Companies (JGC) and their partners, PURECO.

The wastewater treatment plant is situated on a 22,000 square metres with the capacity to receive and treat 150 cesspit tanks of liquid waste trucks in a day.

According to Mrs Dapaah, the commissioning of the KWTP marks one of the very important milestones in the government’s efforts at dealing with wastewater management—liquid waste management—in the Greater Kumasi Metropolitan area.

“This is in addition to what is already existing. But I must say that this is the biggest and the most modern state-of-the-art project. We are very lucky to have this project in the Greater Kumasi Metropolitan area,” she elatedly said.

The new Kumasi wastewater treatment plant, she continued, will assist in the elimination of open defecation and indiscriminate dislodging of faecal matter in Kumasi and its satellite communities.

“It is also my hope and I pray that all the regions will get such state-of-the-art liquid waste treatment plants, and government is ever poised to encourage the private sector to look at this, especially the Jospong Group of Companies, as they have succeeded in providing one which we are commissioning today,” she said.

Mrs Dapaah, therefore, described the project as a “laudable enterprise,” adding that she had been actively involved in the project right from day one and even at a point had to represent President Nana Addo Dankwa Akufo-Addo in Hungary during the signing of the agreement.

She thanked the Hungarian government for its “massive support,” emphasizing that sanitation was one priority area for the Akufo-Addo administration, hence the creation of her ministry.

The sanitation and water ministry, she explained, was not only created to develop appropriate policies for the WASH sector, but also coordinate the activities of Environmental Service Providers (ESPA).

This, she indicated, was to make it more responsive to the needs of the citizenry.

Government, she said, recognised the role proper sanitation management plays in the socio-economic advancement of the country.

“It is in respect of this that no effort is being spared to provide answers to the infrastructural gap identified as one of the major challenges plaguing the sector,” she said.

However, the minister emphasised that with the dwindling resources in the face of the huge financial requirements to address the challenges in sanitation space, the involvement of the private sector was crucial.

In this regard, Mrs Dapaah reiterated that government has created and was continuously enhancing the enabling environment to allow more private sector participation and other development partners to assist in bridging the funding gap.

“All private sector players are most welcome, and here I must commend the Chairman of the Jospong Group of Companies and his team for taking the risk and in the right direction to also embrace all opportunities in the sanitation sector,” she urged.

The Asafohene/Akwamuhene, who also doubles as the Akwamu Division of the Kumasi Traditional Council, Akyamfour Asafo Boakye Agemang-Bonsu, who delivered a speech on behalf of the Asantehene, Otumfuo Osei Tutu II, applauded the efforts of the Executive Chairman of JGC, Dr Joseph Siaw Agyepong, for his “outstanding business acumen” and practical and innovative solutions to waste management problems in the country.

The Asantehene said development was the product of the policies pursued by government.

In line with the above and to ensure sustainable development, he entreated governments to create policies that support initiatives and innovations.

“This is why I want to use this opportunity to commend the government through His Excellency, the President, Nana Addo Dankwa Akufo-Addo, and other government agencies for providing the needed support and creating the enabling environment for the private sector to lead and drive development”

Additionally, he commended the Hungary government for its untiring efforts in seeing to the completion of the project.

According to Otumfuo, Kumasi and its environs, has, in the past years, been battling with the problem of indiscriminate discharge of faecal waste in unauthorised places, polluting the air quality, contaminating the water bodies and generally affecting the wealth and wellbeing of the communities in the catchment areas.

He stressed it was very heartening that the Kumasi wastewater treatment plant will have no negative impact on the ecosystem, following an Environmental Impact Assessment (EIA) carried out prior to the construction of the plant.

He was particularly excited that the facility will not only serve as learning centre for tertiary institutions in the region, but equally open up Asanteman for more investors, create jobs for the people and improve the health and general wellbeing of the people.

In his welcome address, the Ashanti Regional Minister, Simon Osei Mensah, said the wastewater facility will bring a huge relief to the majority of especially urban dwellers in Kumasi and its environs.

He recounted that first wastewater plant was constructed around 1958 at Dompoase which life span did not last long because it broke down a few years later.

“The construction of this new state-of-the-art wastewater treatment facility is a very welcoming news to the people of Kumasi and its adjoining communities,” he noted.

Furthermore, he was elated that it was the largest in the whole of the Ashanti Region, adding that it demonstrates the government’s commitment to ensure fair distribution of the national cake.

For his part, the Executive Chairman of JGC, Dr Joseph Siaw Agyepong, said the plant will create employment for some 1200 people, 200 directly and 1,000 indirectly.

He expressed gratitude to Otumfuo Osei Tutu II for making land available for the project.

He also praised President Akufo-Addo for his sterling leadership, particularly in managing the Covid-19.

“Interventions such as the nationwide disinfection and fumigation exercises and currently the ongoing vaccination against Covid-19 have all helped reduced the impact of the pandemic on the country.

The Hungarian Ambassador to Ghana, H.E. Andras Szabo, described Dr Siaw Agyepong as one of the best businessmen in the whole of Africa.

Among the benefits of the plant are improving living conditions of residents in Kumasi and its environs, increasing lining standards, decreasing level of contamination in ground and surface waters and achieving good hygienic conditions.

Among the dignitaries who grace the event were members of the Parliamentary Select Committees on Sanitation and Water Resources, Local Government and Rural Development, Finance, Environment, Science and Technology and Works and Housing, traditional leaders among others.