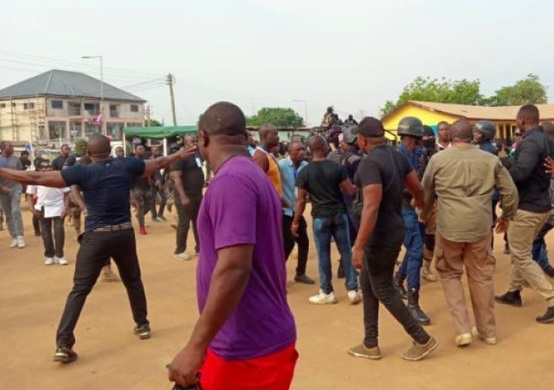 The Electoral Commission (EC) of Ghana has condemned the gun shot incident that rocked the Steps to Christ registration centre in the Awutu Senya East constituency in the Central Region on Monday, July 20, 2020.

The election management body in a statement released after the incident said some of its officials were attacked by men who disrupted the registration process by firing shots at the centre.

They are therefore calling on the police to ensure peace prevails at the centre.

“The Commission condemns such acts during a civil exercise like the Registration of Voters and calls on security agencies to investigate the issue as a matter of urgency to bring the perpetrators to book. These acts constitute a breach of the Vigilante and Related Offenses Act, 2019, Act 999. The Act seeks to disband violent activities of political parties and makes political vigilantism an offense punishable by a prison term”, the Commission said in the statement.

The Commission further called on the general public to condemn the violence and urges all eligible voters to turn out in their numbers to register to vote in the 2020 general elections.

Four persons have been arrested in connection with the shooting incident that brought the registration of voters to an abrupt end.

The Member of Parliament for the area and Minister of Special Development Initiatives, Mavis Hawa Koomson has admitted to firing the gun shots in self-defense to disperse a mob that was attacking her.