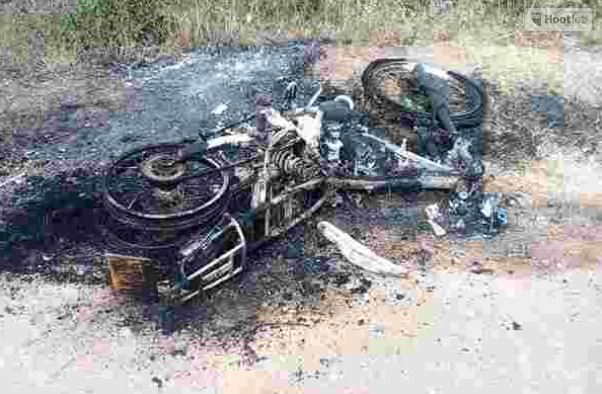 Adawso in the Akuapem North Municipality of the Eastern Region. The accident occurred Tuesday, March 2, 2021, at about 8:00pm. The bodies of the deceased persons -Abigail Mawuli, 24, and Abokyi Michael,26, have been deposited at the morgue.

The rider Kwaku Amponsah,19, was riding an unregistered Royal motorcycle from Adawso towards the Apasare community with two pillion riders-Abigail Mawuli and Abokyi Michael onboard.

However, on reaching a section of the road at the outskirt of Akuapem -Adawso the rider veered into the opposite lane and collided with Hyundai H100 mini bus with registration GT 5964-10 driven by one Isaac Kwaku Mintah coming from the opposite direction.

The motorcycle caught fire after the collision, the rider Kwaku Amponsah and the pillion rider Abigail Mawuli were burnt beyond recognition.

Their dead bodies have been deposited at “Live Now” mortuary at Tinkong for preservation and autopsy.

The second pillion rider Michael Abokyi is on admission at Regional hospital, Koforidua responding to treatment.

The acting Public Relations Officer of the Eastern Regional Police Command, Sergent Francis Gomado told Kasapa News the accident vehicle has been impounded at the Police station to assist in the investigation.

The Eastern Regional Commander of the Motor Transport and Traffic Department (MTTD) of the Ghana Police Service, Chief Superintendent Stephen Ahiatafu has said that motorbikes (Okada) and tricycle (Pragia) killed 20 out 60 people who died on roads in the region from January to February 13, 2021.

“From January to 13th February we had 60 people killed in the Eastern Region, and Kibi Division is leading that on Nsawam to Suhum area. In all, we have 45 accidents that were fatal. With that 45 accidents, 60 people were killed. You will be startled to note that commercial vehicles killed 19, private vehicles killed 8, motorcycle/tricycle killed 20 and then the pedestrian knockdowns were 13” Superintendent Stephen Ahiatafu said.

Superintendent Ahiatafu indicated analysis by the MTTD shows that “motorcycles and tricycles are killing more people than the vehicles and most of them didn’t have license so we are going to embark on series of checks on them the public should not take it to us the police is harassing them. When we arrest you we will ensure that the law takes its course” he said.