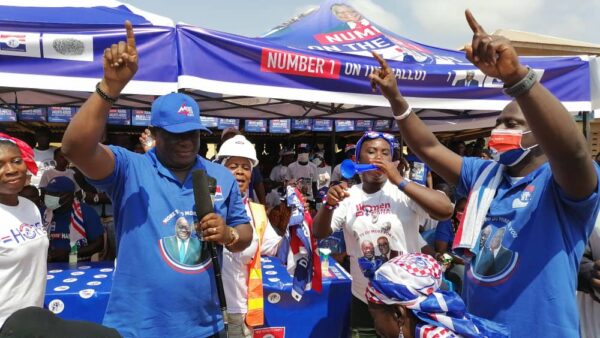 The Member of Parliament for Atewa West who doubles as the Minister of Roads and Highways Kwasi Amoako Attah has warned troublemakers to desist from any evil plan during the 2020 general election.

According to him, some of his supporters were brutalized during the 2010 by-election a situation his outfit won’t entertain saying, “this will never repeat in 2020 election“.

There was an alleged incident of the then NDC National women’s organizer Anita Desoso using her vehicle to run through some supporters of the NPP in 2010 during the by-election.

The 2010 Atiwa by-election was characterized by violence and significant amongst them were the alleged accident involving the vehicle of the then NDC women’s organizer, the damage of the official vehicle of a DCE, and assault on other persons.

The then Inspector General of Police (IGP), Mr. Paul Tawiah Quaye, sent a high powered delegation from the Criminal Investigations Department (CID) to the Eastern Region to investigate allegations of violence that characterized the Atiwa by-election.

Moreover, speaking to party supporters at Abomosu and Sankubanase in the Atiwa West District yesterday Sunday 29th November 2020 during a walk with Amoako Attah, the MP revealed his intelligence indicates some people are planning to interrupt the 2020 General Election in the area.

He sent a strong signal to the said evil planners to avoid any problem adding, his outfit will not entertain any troublemakers.

“My people were brutalized to the extent that they drove their cars, run through some of my supporters… 2nd fool is not a fool. From now till Election Day, I am not going anywhere. I have sought permission from the president so I am staying here until December 7. Since last week, I’ve heard a threat from some troublemakers who want to interrupt the election, causing fear to NPP supporters. They should pray I no longer live on Election Day, but if by God’s grace I am alive on 7th December I am throwing a challenge to whoever thinks he is a man to cause problem…I want to see that person! Whoever thinks he is a man enough to cheat on my people, we’re patiently waiting for him on that day. I am not going to say anything because for us, NPP we believe in the rule of law, we are humble, we are well educated, our president is a champion of the rule of law.’’ The Atiwa West Legislature stated.

He also sent a strong signal to hotel/guest house operators to be vigilant about visitors they keep especially during this crucial time adding “the security intelligence will identify these troublemakers if you keep these people, your facility is as in danger as the people you are keeping. I am telling you those troublemakers if identified in your hotels or guest house, their lives are as much in danger as your facility or your house’’.