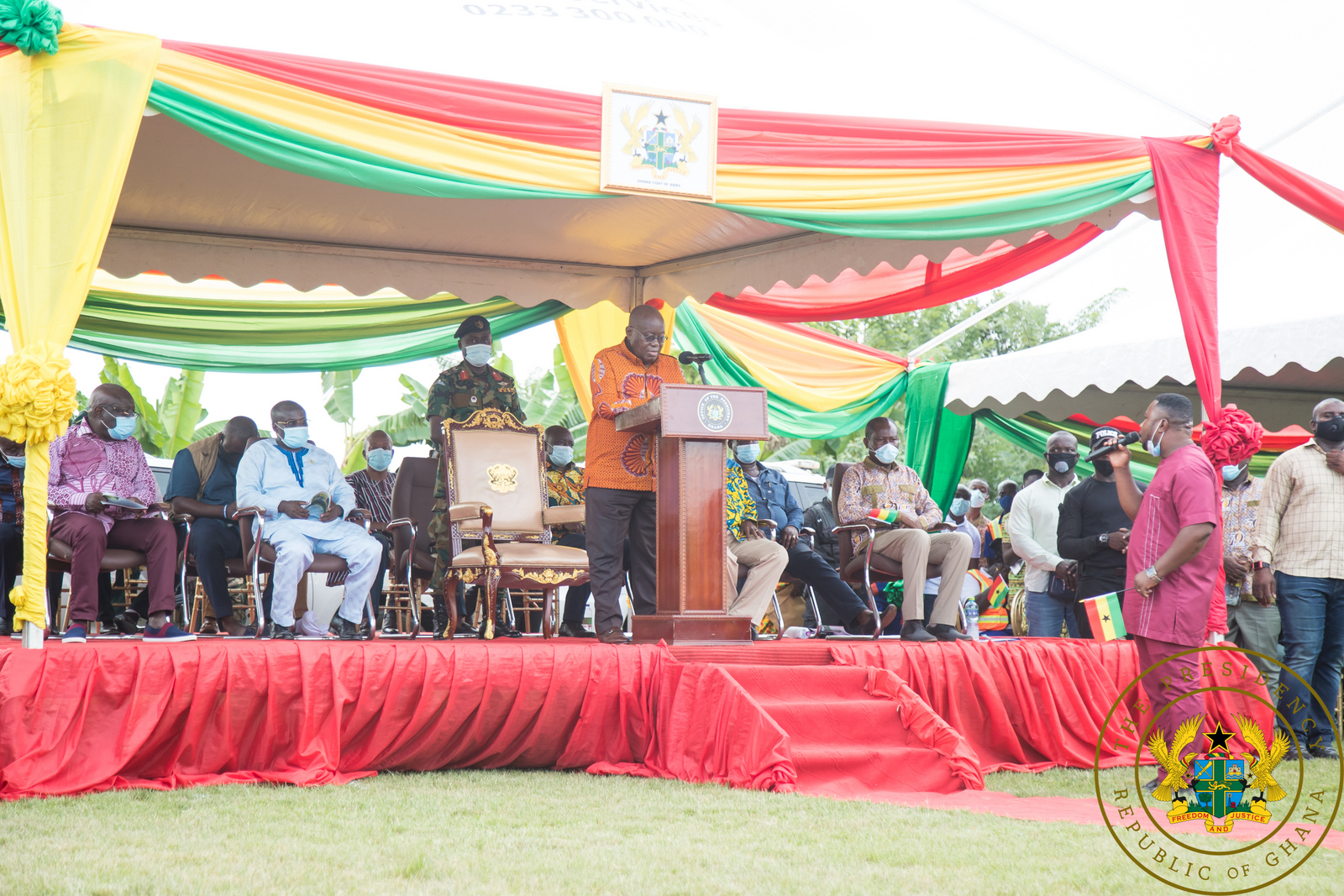 The President of the Republic, Nana Addo Dankwa Akufo-Addo, says Government is resolved to replanting all swollen-shoot affected farms in all the regions of cocoa cultivation, and, thereby, help improve the yield per hectare for all cocoa farmers.

Speaking at the launch of Government’s Cocoa Rehabilitation Programme on Thursday, 24th September 2020, at Sefwi Wiawso, on day 1 of President Akufo-Addo’s 3-day tour of the Western Region, he stated that “it is important to note the significance of paying compensation to farmers and landowners, alike, where tenancy arrangement exists. This has never happened before”.

Addressing the gathering, the President stated that a survey of the country’s cocoa farms in 2017 revealed that, out of the total national cultivated cocoa area of 1.95 million hectares, about 17% of the cocoa tree stock was affected by the cocoa swollen shoot virus disease (CSSVD), and 23% was overaged.

To this end, the President “my administration came to meet a cocoa sector which had about 760,000 hectares, being either unproductive or unable to guarantee the sustainability of the industry”.

He stressed that “Because of the neglect of the recent past, the disease had spread to cover every COCOBOD delineated cocoa region in the country – Western North, Western South, Central, Eastern, Ashanti, Brong Ahafo and Volta. Two-thirds of the blighted cocoa area in Ghana, representing some 214,000 hectares, was found in the Western North Region alone.”

According to the President, so much cocoa farmland has been lost to the cocoa swollen shoot virus disease that the Western North Region, which once produced over 330,000 tons of cocoa in 2010/2011, is now producing below 150,000 tons today.

It is in response to this challenge, the President told the gathering, that his Government “took the bold and pragmatic step for COCOBOD to secure a US$600 million receivable-backed syndicated loan facility.

More than two-thirds of the amount, he said, will go directly into rejuvenation of diseased and overaged farms and productivity enhancement activities, including pruning and hand pollination and irrigation of cocoa farms. The remaining amount will go to support local processing and value addition, and promotion of local consumption of cocoa products.

“Government sees the swollen shoot virus and spread as a national disaster. If, today, our cocoa farmers are being confronted by the ravages of the virus, then it is right and just that the entire country rises up to the occasion to support them back onto their feet. This is my conviction, and this is exactly what I am doing,” President Akufo-Addo said.

“I am aware that the programme has created thousands of jobs for the youth in the beneficiary communities who have been engaged in disease spotting, cutting of diseased trees, replanting, weeding and technical assistance. In all, fifty thousand (50,000) youth are being recruited for the programme, which is going to run for the next five (5) years,” he added.

Thus far, President Akufo-Addo indicated that 11,564.28 hectares of swollen shoot affected farms in the Western North and Eastern Regions have been treated and planted with cocoa, plantain and economic shade trees. Additionally, 8,904 farmers, out of which 7,358 have been fully compensated.

“Government assures our cocoa farmers that not a single farmer will be left out in the on-going compensation exercise; every farmer, whose farm has been affected by swollen shoot, will be paid fully. The next phase of the rehabilitation programme will cover 154,400 hectares of diseased and overaged cocoa farms,” the President added.