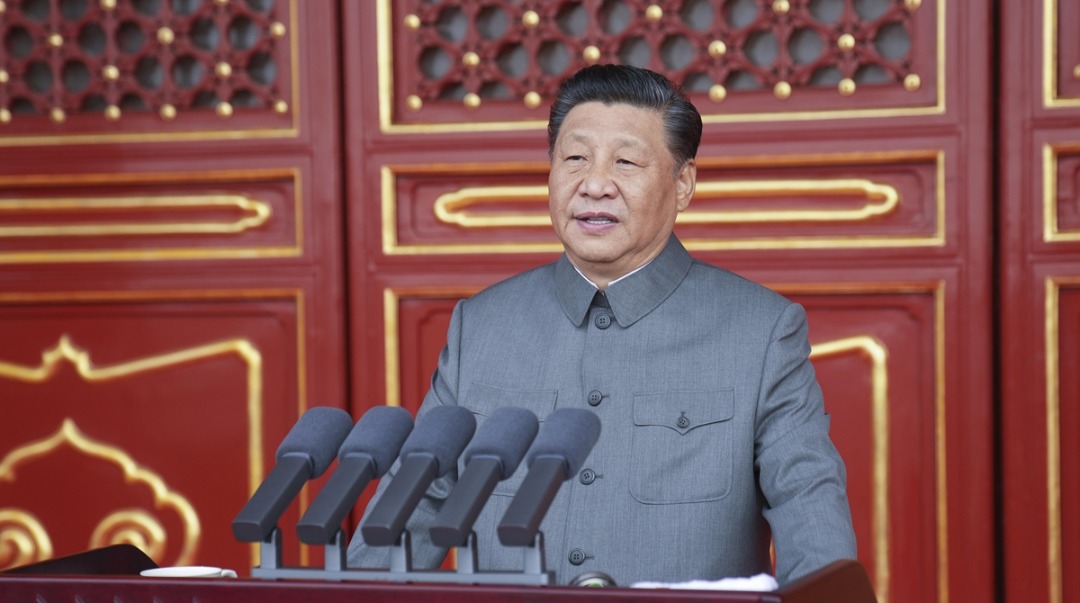 July 1st, 2021 marks the 100th anniversary of the founding of the Communist Party of China. H.E. Xi Jinping, General Secretary of the Communist Party of China (CPC) Central Committee, Chinese President and Chairman of the Central Military Commission, declared at the Ceremony that through the continued efforts of the whole Party and the entire nation, China has realized the first centenary goal of building a moderately prosperous society in all respects.

This means that China has brought about a historic resolution to the problem of absolute poverty in China, and China is now marching in confident strides toward the second centenary goal of building China into a great modern socialist country in all respects.

After the Opium War of 1840, China was gradually reduced to a semi-colonial, semi-feudal society and suffered greater ravages than ever before.

To save the nation from peril, the Chinese people put up a courageous fight. A variety of plans were devised to ensure national survival, but all of these ended in failure.

With the salvoes’ of Russia’s October Revolution in 1917, Marxism-Leninism was brought to China.

Then in 1921, as the Chinese people and the Chinese nation were undergoing a great awakening and Marxism-Leninism was becoming closely integrated with the Chinese workers’ movement, the Communist Party of China was born.

The founding of a communist party in China was an epoch-making event, which profoundly changed the course of Chinese history in modern times, transformed the future of the Chinese people and nation, and altered the landscape of world development.

This country is its people; the people are the country. The Party has always represented the fundamental interests of all Chinese people; it stands with them through thick and thin and shares a common fate with them.

The Party has no special interests of its own—it has never represented any individual interest group, power group, or privileged stratum.

Over the past hundred years, the Party has united and led the Chinese people in enduring great hardships, achieving great success for socialism with Chinese characteristics in the new era.

The Chinese nation has achieved the tremendous transformation from standing up and growing prosperous to becoming strong, and that China’s national rejuvenation has become an irreversible historical inevitability.

The Party was chosen by history and the people. On the journey ahead, the firm leadership of the Party must be held.

The Communist Party of China is committed to continuously working to promote the building of a human community with a shared future.

Peace, concord, and harmony are ideas the Chinese nation has pursued and carried forward for more than 5,000 years.

The Chinese nation does not carry aggressive or hegemonic traits in its genes. The Party cares about the future of humanity, and wishes to move forward in tandem with all progressive forces around the world.

The Communist Party of China will remain committed to promoting peace, development, cooperation, and mutual benefit, to an independent foreign policy of peace, and to the path of peaceful development.

We will work to build a new type of international relations and a human community with a shared future, promote high-quality development of the Belt and Road Initiative through joint efforts, and use China’s new achievements in development to provide the world with new opportunities.

The Party will continue to work with all peace-loving countries and peoples to promote the shared human values of peace, development, fairness, justice, democracy, and freedom.

We will continue to champion cooperation over confrontation, to open up rather than closing our doors, and to focus on mutual benefits instead of zero-sum games. We will oppose hegemony and power politics, and strive to keep the wheels of history rolling toward bright horizons.

Chinese are a people who uphold justice and are not intimidated by threats of force.

As a nation, China has a strong sense of pride and confidence. China has never bullied, oppressed, or subjugated the people of any other country, and China never will.

By the same token, China will never allow any foreign force to bully, oppress, or subjugate us.

Anyone who would attempt to do so will find themselves on a collision course with a great wall of steel forged by over 1.4 billion Chinese people.

Enhancing unity and cooperation with Africa has always been high on China’s diplomatic agenda.

China and Africa fought shoulder to shoulder in the great struggle to win independence and uphold dignity. We have partnered with each other in pursuit of economic development and better lives for our peoples; and we have supported each other on issues that are important to our core interests and are of major concern to us.

Despite rapid changes in the international landscape, China-Africa friendship has remained rock-solid and as strong as ever.

Ghana is among the earliest countries in sub-Sahara Africa to establish diplomatic ties with China.

We are the pilots of China-Africa friendship. In September 2018, President Nana Addo Dankwa Akufo-Addo paid a state visit to China and held bilateral talks with President Xi Jinping.

The two leaders delineated the blueprint of the future China-Ghana relations. Economically, the economy and trade exchange between China and Ghana has been flourishing.

We are the pilots of China-Africa cooperation. China is Ghana’s biggest trading partner and foreign investment source.

Since the outbreak of Covid-19 pandemic, China was the first to dispatch charted flight to Ghana with assistance.

China donated many health supplies such as masks, ventilator, disinfectant, diagnosis equipment, and living supplies such as nutrition and rice. The China-Ghana traditional friendship was greatly consolidated in the united fight against the pandemic.

A century ago, at the time of its founding, the Communist Party of China had just over 50 members.

Today, with more than 95 million members in a country of more than 1.4 billion people, it is the largest governing party in the world and enjoys tremendous international influence.

Today, a hundred years on from its founding, the Communist Party of China is still in its prime, and remains as determined as ever to achieve lasting greatness for the Chinese nation.

Looking back on the path we have travelled and forward to the journey that lies ahead, it is certain that with the firm leadership of the Party and the great unity of the Chinese people of all ethnic groups, we will achieve the goal of building a great modern socialist country in all respects and fulfill the Chinese Dream of national rejuvenation.

The author of this article is H.E. Lu Kun, Chinese Ambassador to Ghana