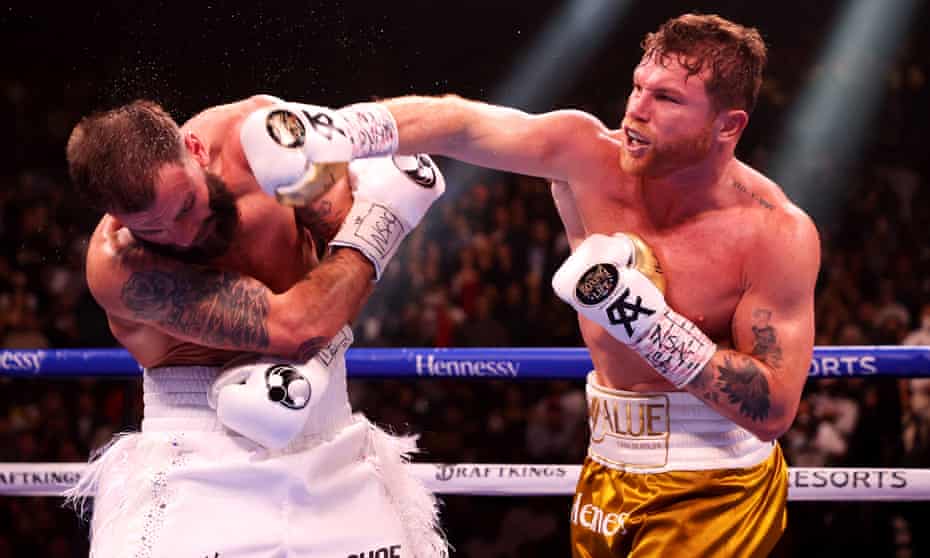 With a powerful left shot and right uppercut followed by a combination of both hands, the IBF Middleweight champion visited the canvas but got up to beat the count of the refree.

Alvarez seeing that his opponent was badly hurt went in for the kill by following up with a flurry of powerful left and right shots to send Plant to the canvas a second time.

This time around, referee Mora waved for the end of the fight at 1:05 with Saul Canelo Alvarez becoming the undisputed King of the Super Middleweight Division and making history in the process.

Caleb Plant going into the fight was the heavy underdog after many boxing lovers and pundits had rated him very low in the division. However, he left an indilible mark in the minds of many who watched the fight inside the MGM Grand Arena and those who whatched from afar after putting up a spirited performance that got Canelo frustrated at a point.

It was very close to call going into the 11th round with Caleb Plant using his boxing IQ to dazzle Canelo whose confidence began to grow in the 7th round and becoming more aggressive afterwards.

With the 11th stoppage, Canelo Alvarez is now the undisputed Super Middleweight Champion of the World, a feat boxing greats who ever fought in the division couldn’t achieve.

When the 11th round was replayed to him and questioned what was going through his mind at the time, he said “that’s the way it had to finish. He was seriously hurt and I went for the kill”.

The two fighters embraced each other after the fight to put behind them the bad blood that had ensued between them in the pre-fight buildup.

When asked what he, Alvarez was discussing with Plant, he said “we are men and the end, he wanted to still fight but I told him there is no shame. He told me he’s is sorry about the motherf…er incident and he didn’t mean it like that. I told him everything is okay and to keep going”.

He also could not tell his plans for the future except to say that “we need the rest, first”.