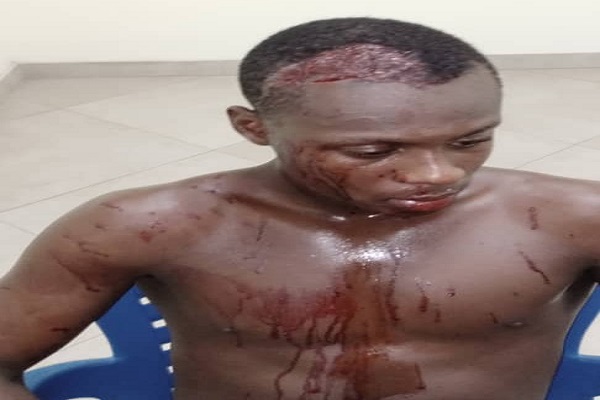 A man said to have been offended some time ago by his neighbour, on Tuesday, blazingly stormed his victim’s shop at Kasoa-Semanhyia in the Awutu Senya East Municipality with 15 thugs believed to be landguards, and in the process, inflicted cutlass wounds on a mother and her son.

The action is believed to be in retaliation of the paid caused him by his neighbor.

The victim, identified as Yaa Comfort, sources say, had a brawl in the past with her neighbour but the issue that triggered that fight had long been resolved, with the parties believed to have lived in harmony thereafter.

However, Comfort, commenting on the incident said she was shocked to the marrow to see her neighbor with 15 thugs, storm her shop to inflict cutlass wounds on her and the son living them in critical condition when they have committed no crime again them.

The mother and son were selling foodstuffs in their shop when their offended neighbor and the thugs pounced on them.

The suspect, who is yet to be identified, is reported to have taken to his heels with the thugs after inflicting the cutlass wounds on the mother and son.

He is said to have threatened to cause harm to woman’s children should he ever set eyes on them in his vicinity due to the feud between him and the woman.

The children upon hearing this, rushed back home to inform their mother and senior brother called Fred.

Fred, www.politicoghana.com understands, confronted the man, with the move said to have resulted in a fight between them.

The main issue said to have stoked the fire is immediately not known.

Fred after returning to the shop the shock moments after his encounter with the man had of his life when his opponent returned with some thugs to inflict cutlass wounds on him and his mother.

He suffered severe damages on his head while the mother sustained serious injuries on her hand. They have been rushed to the Kasoa Polyclinic where they are undergoing treatment.

The matter has since been reported to the Kasoa Police Station. At the time of filing this story, no arrest had been made yet.

Kasoa-Semanhyia, Man returns with landguards to inflict cutlass wound on mother and son