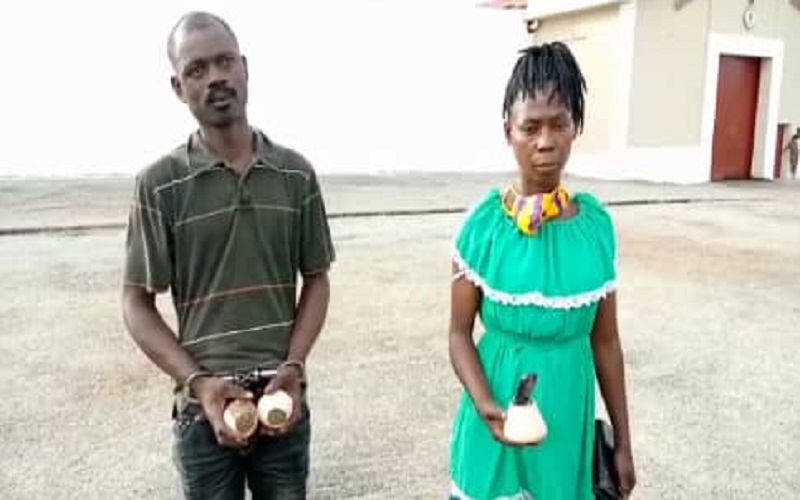 Two persons have been arrested by Ankaful Prison Officers in Cape Coast in the Central Region on Saturday for attempting to smuggle substances suspected to be cocaine and Indian hemp (wee) into the prison yard for an inmate.

The duo, have since been identified as John Mensah and Margaret Amponsah.

Pieces of information gathered by politicoghana.com revealed that the two were sent by one Desmond Asamoah, to deliver the suspected narco drugs to an inmate who has been in the Ankaful Prison for some years now.

The suspected narco drugs were parceled in a form of raw food stuffs which were concealed in an earthenware pot and earthenware pestle which had some eggs on top.

The victims had attempted to smuggle the suspected narco drugs into the prison yard but the men and women in brown uniform who were detailed at the main entrance of the Ankaful Prison decided to thoroughly examine the items before allowing them entry.

In the process of examining the items, the officers had a shock of their lives when they broke one of the earthenware pots and earthenware pestles to discover the concealed suspected narco drugs.

It was at this point that the duo were arrested with the rest of the items also being thoroughly examined. Four mobile phones also hidden in the items were also retrieved.

Upon interrogation, Margaret Amponsah confirmed that the suspected narco drugs were given to her for delivery by Desmond Asamoah, whom she got married to some three months ago.

The suspected narco drugs, she noted, were to be delivered to John Mensah, a middleman, for onward delivery to the prison inmate who is yet to be identified and arrested.

Margaret told the Prison Officers that she was unaware that the items had hidden or concealed substances suspected to be narco drugs.

John Mensah on his part, told the Prison Officers that he only received a call from Desmond Asamoah to take delivery of the items from Margaret Amponsah for onward delivery to an inmate in the Ankaful Prison and therefore, was also unaware that the items had concealed suspected narco drugs.

The Central Regional Public Relations Officer of the Ghana Prisons Service, Supt. Vincent Ziniel, commenting on the arrest, described the act of the duo as illegal.

According to him, authorities of the Prisons Service are aware of what some people have been doing to smuggle narco drugs to prison inmates. Most of the arrested victims in such ordeal, he noted, come from Mankessim in the Mfantseman Municipality.

About five people have been arrested and handed over to the Police in connection to such acts since the beginning of the year, 2021, Supt, Ziniel noted.

The two, he added, will be handed over to the Police and arranged before court on Tuesday, May 4, 2021.

He cautioned the general public to desist from smuggling narco drugs into prison yards.