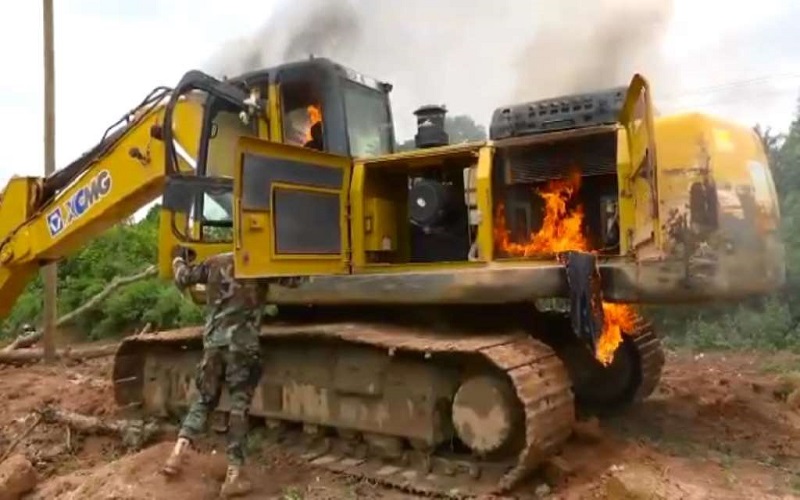 The Minister Lands and Natural Resources, Samuel Abdulai Jinapor, has said that the burning of excavators in the fight against illegal mining (galamsey) in water bodies and forest reserves, is legally justifiable since it falls within the remit of the 1992 Constitution of the country.

He quoted Article 36(9) of the 1992 Constitution to buttress his argument, saying that “this constitutional provision forms part of the directive principles of State Policy which is supposed to guide all citizens, the Executive, the Legislature and the Judiciary in the application and interpretation of the constitution and any other law, as well as in taking and implementing policy decisions of the country.

Article 36(9) states that “The State shall take appropriate measures needed to protect and safeguard the national environment for posterity and shall seek co-operation with other states and bodies for purposes of protecting the wider international environment of mankind”.

Mr. Jinapor again quoted Article 41(k) of the constitution to further make a case for the stance taken by government in addressing the galamsey menace.

Article 41(k) also states that “The exercise and enjoyment of rights and freedoms is inseparable from the performance of duties and obligations, it shall be the duty of every citizen to protect and safeguard the environment”.

“Mr. Speaker, the combined effect of these two provisions is that citizens, who seek the protection of the law, have a duty to protect and safeguard the environment, and the State, as the custodian of the environment, has a duty to take measures necessary to ensure that the environment is protected for posterity”, he noted.

He added “One of such measures is to de-commission and or de-mobilize equipment used in illegal mining, so that the perpetrators of these heinous crimes do not go back to continue the illegality with the same equipment”.

De-commission and de-mobilize equipment, he explained, is the act of rendering the equipment being used useless.

Therefore, the burning of excavators is one measure adopted by the military undertaken “Operation Halt” to fight illegal mining in river bodies and forest reserves marked as “Red Zones” in the country.

Mr. Jinapor made these observations on the floor of Parliament on Wednesday, June 30, 2021, when answering to a question posed by the National Democratic Congress (NDC) Member of Parliament (MP) for North Tongu, Samuel Okudzeto Ablakwa.

Ablakwa had asked the Lands and Natural Resources Minister the legal and policy justification for the burning of excavators in the ongoing fight against illegal small scale mining (galamsey).

Commenting further, he said whilst a of attention is focused on those who mine without licence, there are a lot of illegalities that are perpetrated even by persons holding valid mineral rights.

He described the menace confronted by the as an extraordinary problem, noting that such a problem also requires extraordinary measures needed to be deployed to fight it.

“Mr. Speaker, the use of heavy machinery, such as excavators, for illegal mining in, and or near our forest reserves and water bodies is an extraordinary problem which requires the use of extraordinary measures to deal with”, he noted.

There is an ongoing debate among the general populace as to whether or not it is legal and prudent to burn excavators which are being used to mine in water bodies and forest reserves, thereby, polluting the water bodies and destroying the forest cover.

While a cross section of the public, including politicians from opposition political parties, argue the burning of excavators is illegal, which in the future, will bring a lot of judgement debt to the state, government officials on the other hand say the approach is justifiable.

Mr. Ablakwa referred to the Minerals and Mining (Amendment) Act and further cited a case in which the state loss with regards to the burning of excavators as a last gap measure in halting galamsey. The case, he added, has now brought judgement debt on the shoulders of the state.

However, Jinapor in a swift response said the Constitution overrides the Minerals and Mining Act. Besides, the conditions in the case Mr. Ablakwa referred to is not applicable to those mining in water bodies and forest reserves which have been marked as Red Zones.

“Mr. Speaker, I am not oblivious of the provisions of the Minerals and Mining (Amendment) Act, 2020 (Act 995), which requires seizure of the equipment used for illegal mining, the successful prosecution of the people involved, before confiscation of the equipment and it’s eventual disposal by the Minister for Lands and Natural Resources. It is my submission, however, that this law contemplates equipment that are easily retrievable, and which can conveniently be carried from their site to a safe place. The equipment being de-commissioned and or de-mobilized however, are mostly found very deep in the forest, where they cannot be brought out without causing further damage to the forest; or found on water bodies which makes them near impossible to bring out, without destroying the watercourse”, he said.

He added “Mr. Speaker, under such conditions, in accordance with articles 34(1) and 36(9) of the Constitution, the law must be interpreted to protect and safeguard the national environment for posterity. Where it is impossible to remove such equipment, without causing further damage, appropriate measures needed to protect the environment must be taken, and they are being taken. Additionally, as I have sought to establish, Act 995 ought to be purposively construed alongside the dictates of the constitution and settle case law, which will make the action of government legally justified. Furthermore, Act 995 seeks to prevent the use of equipments to mine illegally and this is the same objective government action is intended to achieve”.

Speaking further on Operating Halt, he said the measure adopted by government has resulted in significant improvement “which have never been achieved in the history of our country’s fight against galamsey since the 1980s”.