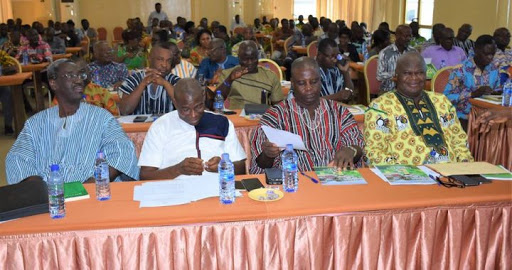 The President of the Republic, Nana Addo Dankwa Akufo-Addo, has directed all Metropolitan, Municipal and District Chief Executives (MMDCEs) to stay at post at least for now until further notice.

The MMDCEs are however, barred from taking any decision involving policy, financial commitment, recruitment and others.

This was contained in a statement signed and released by the Chief Staff, Akosua Frema Opare-Osei on Tuesday, January 12, 2021. She said the directive is in accordance with the 1992 Constitution of the Republic of Ghana.

“I am directed by H. E. the President to inform all Metropolitan, Municipal and District Chief Executives (MMDCEs) who were at post immediately before the inauguration ceremony on Thursday, 7th January, 2021, to remain at post until further notice”, the statement in part read.

It added “You are to take note of the provision of section 14 (5) of the Presidential (Transition) Act (2012) which states that you “shall not take a decision involving a policy issue”. Also, you are to act in accordance with letter No. SCR/DA555.555/01 dated 21st December, 2020 which gives directives on financial commitments, recruitments among others”.