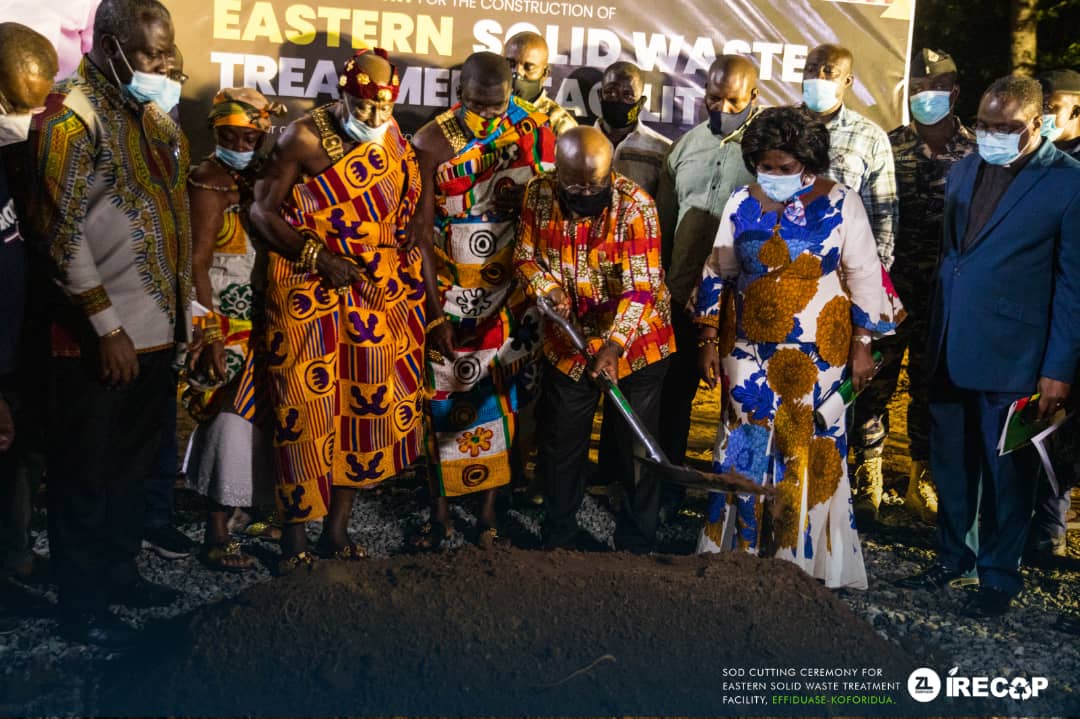 Eastern Region became the eighth region to benefit from the on-going integrated recycling and compost plants being constructed across the country by Zoomlion Ghana Limited (ZGL) and its partners, Komptech, in partnership with the Government of Ghana.

With the exception of Greater Accra and Ashanti Regions whose plants have been inaugurated, work was currently on-going on solid waste treatment plants in Western, Western North, Ahafo, Bono and Bono East Regions.

The Eastern solid waste treatment facility, which is expected to be completed within four months, would be sited at Akwadum, a suburb of Effiduase in the New Juaben North Constituency.

It has the capacity to process tonnes of solid waste a day into compost to be used for agricultural purposes among other useful end products.

When completed, the facility would receive waste from municipalities including New Juaben North and South, Effiduase, Suhum, Abuakwa North and South, Yilo Krobo, Koforidua, Okere and others.

This means that the facility has the capability to meet all the waste management needs of the people of Koforidua and beyond.

President Nana Addo Dankwa Akufo-Addo, who cut the sod on Thursday for work to begin on the facility, was full of praise for the Executive Chairman of Jospong Group of Companies (JGC), Dr Joseph Siaw Agyepong, who also doubles as the Chief Executive Officer (CEO) of Zoomlion Ghana Limited, for supporting his government not only in the area of waste management but also job creation.

“That explains why my government has offered to firmly support Dr Siaw Agyepong and his group of companies in their quest to construct solid waste treatment plants in all the 16 regions,” he affirmed.

The event was part of the President’s three-day tour in the Eastern Region.

He also applauded the efforts of the Sanitation and Water Resources Minister, Madam Cecilia Abena Dapaah, describing her as workaholic and unique amongst all of his ministers.

He described the collaboration forged between the ministry of sanitation and water resources and Zoomlion Ghana Limited as laudable, adding that it will help improve waste management in the country.

According to President Akufo-Addo, ensuring that Ghana becomes the cleanest country in Africa was a top priority of his administration. In this regard, he commended the Effiduasehene who also doubles as the Nifahene, Okoawia Dwomo Baabu II, for releasing land for the project.

The Minister of Sanitation, Works and Water Resources, Mrs Cecilia Abena Daapah, entreated the youth in the regions who would get the opportunity to work in these facilities to give out their best.

Describing the facility as the first in its kind in the Eastern Region, she said, when completed, it will ensure good health. She, however, cautioned that the law will not spare residents who flout environmental bye-laws.

The Executive Chairman of Jospong Group of Companies, Mr Joseph Siaw Agyepong, said, upon completion, the facility will offer jobs to about 325 persons.

“While 75 will have direct jobs, 250 will indirectly be engaged,” he said.

According to him, the solid waste treatment plant initiative was the brainchild of the President.

“And so work would start immediately the President cuts the sod,” he said.

The Chief of New Juaben Traditional Area, Okoawia Dowomo Baabu II, on his part, expressed appreciation to the President for fulfilling all his campaign promises in the run-up to the 2016 election.

He mentioned the implementation of the Free SHS policy, the One District, One Factory (1D-1F) as some of the President’s campaign promises which had been fulfilled and were in inuring to the benefit of the people in the Eastern Region.

“We are happy too that the President on [Wednesday, September 30] cut the sod for the construction of a Regional Hospital at Effiduase,” he gladly said.

“Your policies and programmes are unmatched,” Nana Baabu II stated.