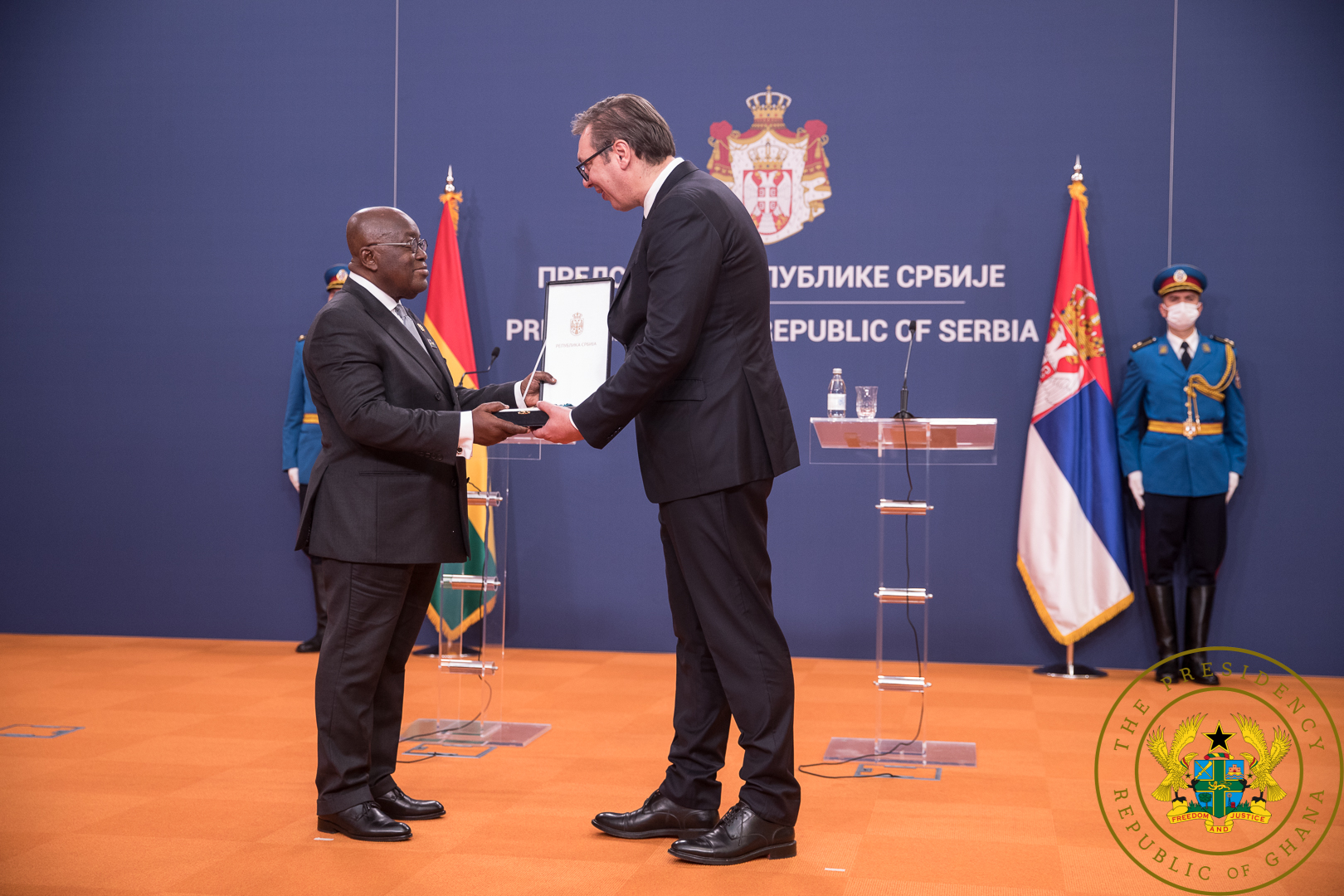 This was done by the President of the Republic of Serbia, Aleksandar Vučić, at a ceremony on Monday, October 11, 2021, at the seat of the Serbian Presidency in Belgrade.

President Akufo-Addo received the award “for exceptional merits in developing and strengthening co-operation and friendly relations between the Republic of Serbia and the Republic of Ghana.”

The order was awarded by the decree of the President of Serbia on the sidelines of the ceremony to celebrate the founding of the 60th anniversary of the Non-Aligned Movement (NAM).

Earlier in the day, the President delivered a statement at the plenary session of the Conference, where he indicated that since the days of Ghana’s first President, Kwame Nkrumah, one of the five (5) historic founding fathers of NAM, Ghana has remained a faithful adherent of its principles, i.e., respect for the territorial integrity and sovereignty of States, non-interference in the domestic affairs of States, and non-aggression against States.

“We believe that the strength of this Movement is determined not just by its numbers, but, more significantly, by the attachment to the principles that founded it.,” the President said.

Recounting the words of Ghana’s first leader, Dr. Kwame Nkrumah, at the 1961 Conference in Belgrade, who bemoaned the hesitance of the world’s super powers to disarm, President Akufo-Addo stated that “60 years later, the great powers have not disarmed, neither has the threat of nuclear war receded. They are still as powerful as they were then, and this has been highlighted by the COVID pandemic, and the unsavoury politics of vaccine nationalism we are currently witnessing.”

He bemoaned the fact that member states of NAM have become global power play, and are subject to the benevolence of powerful countries, who give out their hoarded supplies at their own pace, not necessarily in tandem with realities.

“The need for self-reliance today in the global south is as important as positive neutralism was in the era of the Cold War. The impact of the pandemic on our populations has been severe. We must stand shoulder-to-shoulder, and be resolved to ensure that we are better prepared for future pandemics,” President Akufo-Addo said.

He continued, “We must not miss the opportunity of this occasion to take far-reaching decisions for a more equitable and balanced world, based on the principle of the equality of sovereign States. We should continue to work towards the global objectives of peace, development and inter-dependence.”

The President reiterated Ghana’s belief that the Non-Aligned Movement is as relevant in this 21st century as it was in the 20th century, in protecting the interests of the developing world.

“There will be challenges but, working hand-in-hand, we can move ahead together, and, indeed, much further, more so, when, through our co-operation and solidarity, we achieve the restructuring of the global financial system to facilitate the rapid development of our economies.  The next sixty (60) years of our Movement must mark its empowerment to meet the wishes and aspirations of our peoples for development, dignity and diversity,” he added.