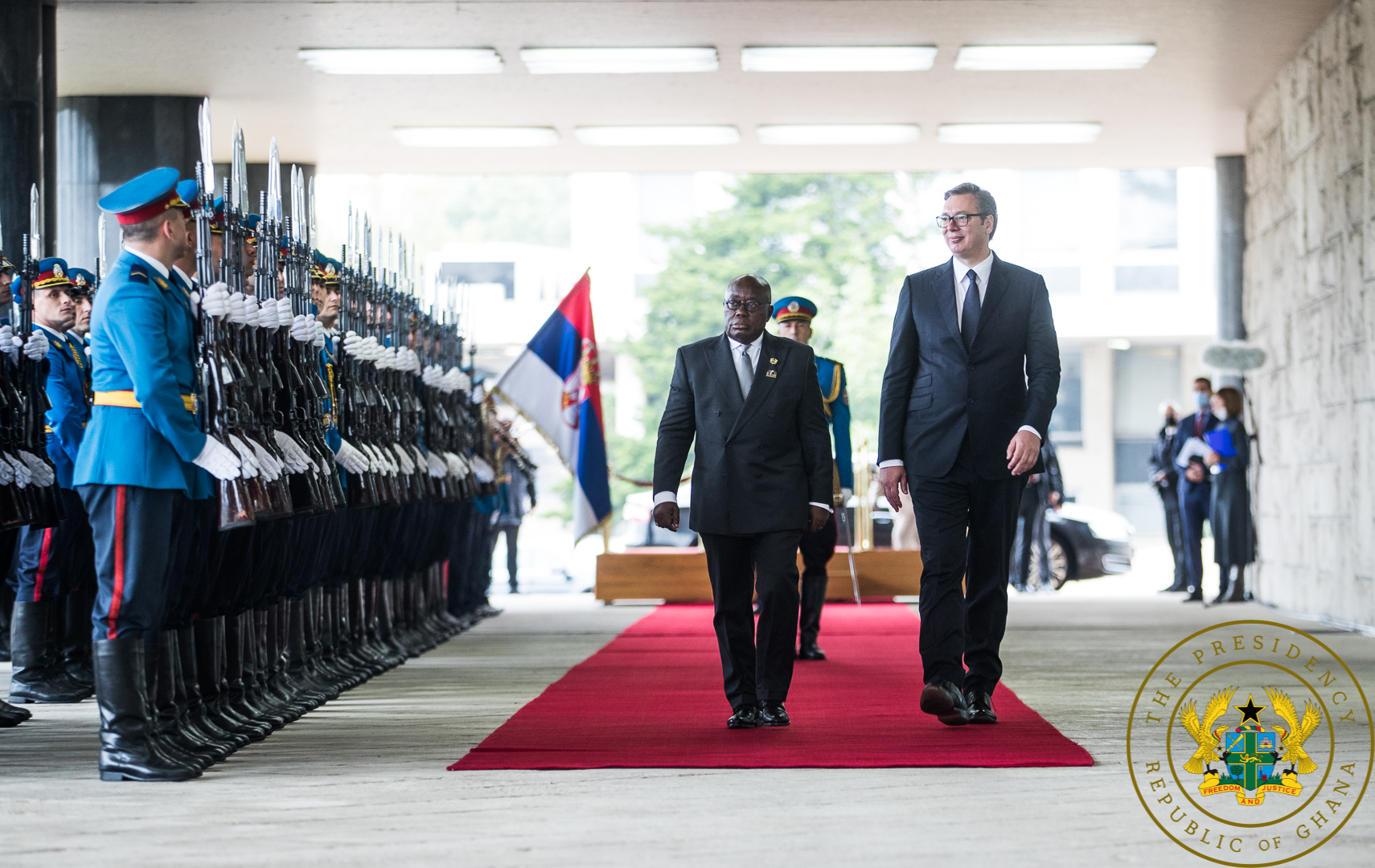 The President of Serbia, Aleksandar Vučić, has lauded Ghana’s President, Nana Addo Dankwa Akufo-Addo, for his smartness and intelligence.

“I learnt so many things from my friend, the President of Ghana, today speaking about world power. We completely share some positions about the necessity of the countries that need to co-operate in the independent sovereign, to make their own decisions independently… I fully agree he is one of the wisest men, one of the great erudites one can learn so many things from”, he noted.

President Vučić made this observation on Monday, October 11, 2021, when he held bilateral talks with President Akufo-Addo, on the sidelines of the ceremony commemorating the 60th anniversary of the founding of the Non-Aligned Movement (NAM).

At the press conference, the Serbian leader indicated that Ghana and Serbia have pledged to build closer ties, and deepen the ties of friendship and the bonds of co-operation between the two countries, with the two nations resolving to co-operate in the areas of agriculture, defence, artificial intelligence and digitilisation, education, and the growth of their respective economies.

Touching on the areas of co-operation between the two countries, which include an increase in bilateral trade and the doubling of Serbian scholarship opportunities to Ghanaian students from sixteen (16) to thirty-two (32), President Akufo-Addo stated that “we (in Ghana) know the important strides that you (Serbia) have taken in the world of digitalisation, as well as in artificial intelligence, and my understanding is that the majority of the young people who will come from Ghana will be in this area. I think it will be something that will be truly beneficial to our country.”

The President reinforced the necessity for such closer ties of co-operation between countries belonging to the Non-Aligned Movement, and the urgent need to deepen the bonds between Ghana and Serbia and, indeed, for smaller, like-minded states.

“The recent example about the use and deployment of vaccines has shown us an ugly aspect of international cooperation. There are people who hoarded samples, and made it impossible for others to be able to have access. I think these are areas where the co-operation between countries like ours could have a very significant impact on the way in which the world develops,” he said.

The President continued that, “there is hopefully a bright future ahead especially between the two countries that see eye-to-eye on so many important issues of the International agenda; the most important being the urgent need for all of us to be able to drive our own agenda, and not be the subject of anybody’s interests or wishes.”

On Ghana’s election onto the Security Council membership, President Akufo-Akufo thanked Serbia for the support of Ghana’s candidature, adding that  “whilst there our contribution will help improve the climate of the world, and bring more positive developments on the global agenda. We count very much on Serbia assisting us in the manner in which you have indicated in your remarks so that we can produce good results from our membership there.”

He also expressed deep concerns about security in Africa, saying “the Jihadist insurrection and terrorist activities in West Africa are a matter of great concern to us, and there are areas where we believe we can beneficially cooperate with your country, with other like-minded countries, to find solutions. They are matters of very great concern to the stability of our region.”

On his part, President Aleksandar Vučić thanked President Akufo-Addo and Ghana for the position taken regarding the territorial integrity of the Republic of Serbia, stressing that such a position is appreciated and respected by the people of Serbia.

“You know that in politics and international relations nothing lasts shorter than gratitude but you will see when it comes to Serbia, we are uncomparably, more loyal to our friends than many others and we will be able to return in the same manner of responsibility,” he said.

The Serbian leader continued, “We offer our construction companies if the people of Ghana are interested, and we are ready to buy tropical fruits and many other products from Ghana if they are interested. Generally speaking, politically wise, not that we have no problems, but we understand each other very very well, but we must work to talk to each other more often, to see each other more often, and to have more frequent contact and to act together in the international scenes.”