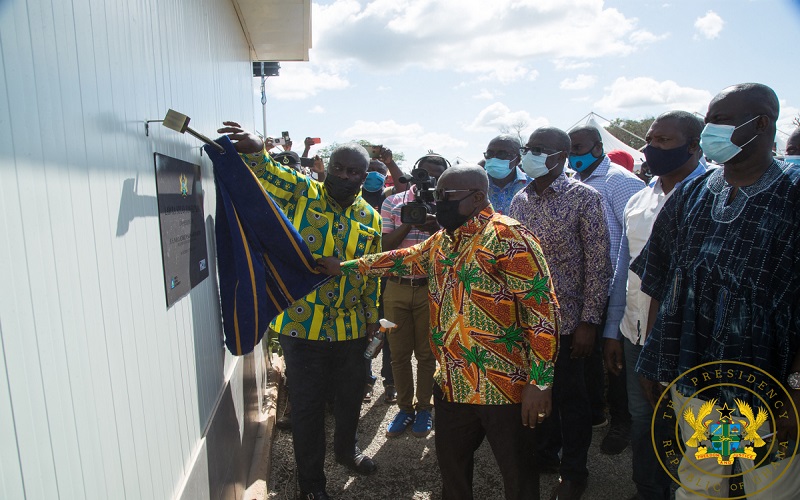 The President of the Republic, Nana Addo Dankwa Akufo-Addo, on Saturday, October 10, 2020, commissioned a 6.5-megawatt solar power plant, located in Lawra in the Upper West Region.

It will be recalled that on Tuesday, February 4, 2020, the President was in Kaleo, in the Nadowli District, to cut the sod for the construction of two solar power projects, one in Kaleo and the other Lawra, both in the Upper West Region.

“I indicated, at the time, that, once completed, these two projects will deliver a combined power supply of about twenty 20 megawatts to the national grid. Eight (8) months on, I am happy to commission the first of the power projects which has been completed, and that is the 6.5-megawatt Solar Power Project, here in Lawra,” President Akufo-Addo said.

The ceremony, according to him, reaffirms the commitment of Government to diversify the country’s energy generation portfolio, and, thereby, help increase the renewable energy component of our energy mix, and contribute to our fight against the effects of climate change.

“The completion of this project in Lawra should remind all of us that the Government of Nana Addo Dankwa Akufo-Addo delivers on its promises,” he added.

He was confident that the solar plant at Lawra and Kaleo. whose combined output is sufficient to meet a significant portion of the electricity demand in the Upper West Region, will help support local small and medium scale enterprises, as well as enhance other socio-economic activities.

Further, the President stressed that it will help reduce transmission losses on our national grid, and improve the reliability of the distribution system in Lawra and its environs.

“I am pleased that the Contractor, in the process of constructing this plant, employed some one hundred (100) people from communities within the Lawra District. I am expectant that persons, particularly the youth, with the requisite technical skills, would be recruited for the operation and maintenance phase of this facility,” he said.

President Akufo-Addo continued, “It is gratifying to learn that the Volta River Authority (VRA) will ensure that this facility becomes a source for practical studies on solar power operations by Technical Universities in the Regions of the northern sector of Ghana.”

As part of their corporate social responsibility to the community, both VRA and Elecnor, the Project Contractor, have undertaken to provide smaller installations of solar power as back-up power to some specific facilities in the community, namely the Lawra Hospital, Municipal Police Command, and a stand-alone system to the Lawra Paramount Chief’s palace.

To this end, the President applauded VRA and Elecnor for their leadership and commitment to the welfare of the people of Lawra, and applauded them for delivering the project ahead of schedule, in spite of the challenges posed by COVID-19.

“The Ghanaian people are very grateful to the German Government for providing the twenty-two million-euro funds for the Project. I look forward to the early conclusion of the negotiations for the second phase of this Project, whose discussions are currently ongoing,” he added.

The Government of Ghana, through the Ministry of Roads and Highways, has signed a contract with Mabey Bridge of the United Kingdom (UK), to facilitate the delivery of 89 modular, steel, emergency-response bridges to be rapidly deployed across Ghana to restore critical infrastructure.

Ghanaian enterprises should be frontline actors in AfCFTA – Akufo-Addo