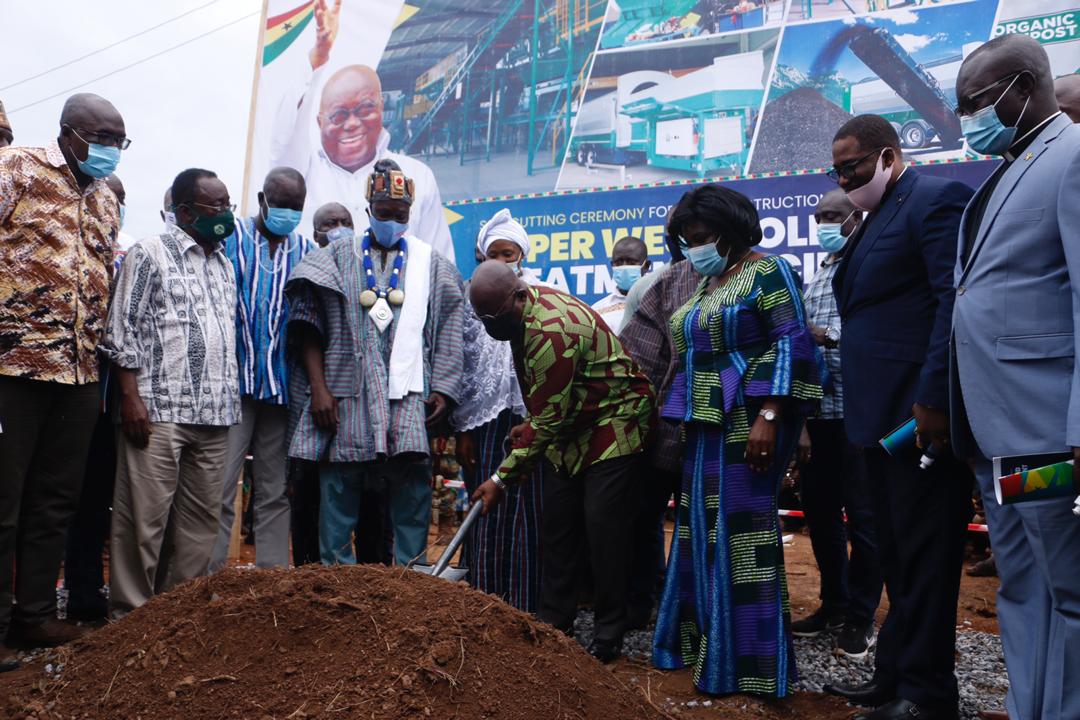 As part of efforts to manage waste and turn it into useable products, waste management expert, Zoomlion Ghana Limited (ZGL) and its partners, Komptech, in collaboration with the Government of Ghana, on the Friday extended its solid waste treatment facility project to the Upper West Region.

The Upper West facility, which will be constructed at Kperesi in the Wa Municipality, saw the residents in the area and some who had travelled from Wa bubbling over with loads of enthusiasm and excitement.

According to scores of them, the project—the first of its kind—will not only help bring sanity to their environs, but will also create job opportunities for the teeming youth in the area.

An opinion leader of Kperisi, Alhaji Seidu, who could not hide his joy, was full of praise for President Nana Addo Dankwa Akufo-Addo, the Ministry of Sanitation and Water Resource and Jospong Group of Companies (JGC) for bringing such project to his community.

Also, Awudu Isaaka, an auto-mechanic, who lives in Wa and had come to witness the event, contended that managing waste in the whole of Wa would now be done effectively.

Addressing the gathering, President Akufo-Addo said: “my hope and purpose for such initiative is that Ghana will be the cleanest country in sub-Saharan Africa at the end of my tenure.”

He said what the country was witnessing was public, private partnership (PPP) at its best.

“That is Jospong Group of Companies partnering with the ministry of sanitation and Water Resources to ensure the construction of integrated recycling compost plants in all the 16 regions across the country,” he said.

According to the President, this was the kind of partnership that the country needed for its rapid growth.

He commended the Sanitation and Water Resources Minister, Mrs Cecilia Abena Dapaah, for what he described as her “incredible dynamism and energy” in her partnership with the Executive Chairman of the JGC, Mr Joseph Siaw Agyepong.

To this end, he urged the people of Wa and Kperisi to give their maximum support towards the success of the project.

The event was part of the President’s two-day working visit in the Upper West.

This, she went on to add, will be recycled into compost and other valuable plastic products, following the completion of the project.

She, therefore, explained that would be a very good source of raw materials for the compost and recycling plant to be built in the region.

“We don’t want to see indiscriminate littering on the environment after the completion of the project,” she cautioned.

She further appealed to the residents to desist from burning waste, indicating that such a practice causes air pollution which brings about health-related hazards.

Madam Dapaah also encouraged the assemblies in the region to ensure an effective and cordial working relationship with Jospong Group of Companies.

The Executive Chairman of Jospong Group of Companies, Mr Joseph Siaw Agyepong, noted that, upon completion, the plant will provide 75 and 250 direct and indirect jobs respectively to the youth in the region.

However, he revealed so far the sod-cutting performed for the 10 solid waste plants would create 5700 workforce “with 10,000 workforce expected after the completion of all the facilities in the 16 regions.”

He commended the Paramount Chief of Kperisi Traditional Area, Naa Mahama Seidu II, and the municipal chief executive (MCE) for Wa Municipal for making available land for the project.

“We are beginning work immediately the President cuts the sod, and the facility would be completed within four months,” he said.

For his part, the Paramount Chief of Kperisi Traditional Area, Naa Mahama Seidu II, expressed appreciation to President Akufo-Addo for ensuring that his community benefits from the share of the national cake.

He appealed to the President to help improve electrification in his community, adding that a “cultural theatre in my community will help unearth loads of talents among the youth in the creative arts space.”

In his welcome address, the Upper West Regional Minister, Dr Hafiz Bin Salih, applauded the President for creating the enabling environment for the private sector to thrive.

A case, he indicated, was the construction of solid waste treatment facilities across the country by Zoomlion in collaboration with the government.

According to him, the facility, when completed, will inure to the benefit of the people of Upper West.