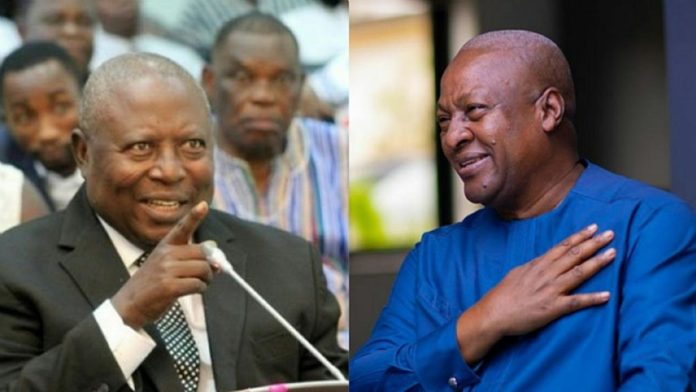 The Special Prosecutor, Martin Amidu, has challenged former President John Mahama to voluntarily, submit himself for interrogation over the Airbus SE saga, if he is determined to deal with the matter.

This comes after Mr. Mahama called the Special Prosecutor a coward for being cited in his corruption risk analysis on the Agyapa Mineral royalties deal.

“If you think that I’m indicted on Airbus, accuse me directly but because he is a coward and he knew that Agyapa was going to be discussed today, so he put a paragraph on Airbus to equalise the discussion; what kind of stupidity is this?,” Mahama fumed.

Reacting to the comment, Mr Amidu said: “Your Excellency, the wise and the brave former President John Dramani Mahama, man-up, wise-up, and be brave enough to come with two lawyers of your own choice to be cautioned and interrogated by this Office to demonstrate your valour and wisdom as not being elected Government Official 1 and also as not being the first guarantor to Samuel Adam Mahama’s passport application”.

He added that he[Amidu] is very daring when it comes to the fight against corruption.

“I have no brother or friend when it comes to my crusade against preventing corruption and fighting corruption. Ghana first always!”

Below are details of the statement by Mr. Amidu