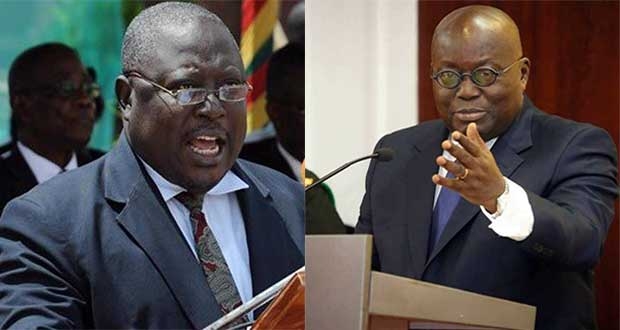 The former Special Prosecutor, Martin Amidu, says he has received death threats on his life following his resignation from office.

According to him, he has made attempts to inform the National Security Minister and the Minister of the Interior but none of these personalities answered a call he placed to them.

He has therefore told the public to hold the President, Nana Addo Dankwa Akufo-Addo responsible if anything untoward happens to him.

“I tried to call Kan Dapaah, he didn’t pick it and I got a former national security advisor to contact him and tell him that, and I know the persons involved, I can name them but I reserve it for the meantime. I put my life for the Republic of Ghana and the President will be responsible for anything that happens to me.

“The intelligence is there and I called the minister of national security but he didn’t pick and I got a former national security advisor to speak to him and this fact is now known and I say that the president will be responsible for anything that happens to me,” he told Accra-based Citi Fm Thursday.

He added: “I’m a Ghanaian and I don’t fear anything and, as I said, to die in the cause of fighting corruption is what I started with President Jerry Rawlings on 31st December 1982 and I’m not going to leave it because some people think that they can threaten me. I don’t give a damn about that.

“…If they don’t stop, I’ll respond. As to what I’ll do, I reserve that for myself but as I said, whatever happens to me, I lay my life for the republic of Ghana and the president has a constitutional duty to protect me. I don’t need any security in my house or to follow me. And anybody who makes an attempt, he will have himself to blame”.

Amidu announced his resignation from office as the Special Prosecutor on Monday, November 16, 2020, citing several reasons among which include not being paid emoluments due him and his deputy as well as interference from the President and high ranking government appointees at the Presidency.

“It is essential for me to state for the purpose of the records, and contrary to public perceptions, that my appointment letter was received on 5th February 2020 (almost two (2)-years after my appointment). The copy addressees made no efforts to honor any of the conditions of appointment in terms of emoluments and benefits of the appointment ever since my warrant of appointment was issued on 23rd February 2018 to the date of my letter of resignation. I accepted the offer on 10th January 2018 to be nominated to be Special Prosecutor because Mr. President, and Ghanaians knew I have been an anti-corruption crusader all my life and not an anti-corruption entrepreneur. This explains why I have never put the emoluments and benefits of the Office as central to my commitment and my passion for the establishment of an independent, effective, efficient and impartial anti-corruption Office of the Special Prosecutor before the end of the first term of Mr. President. This has not been possible for several reasons”, he noted.

Having accepted the resignation letter of Martin Amidu in a letter dated November 17, 2020, the President assured the public that he will respond to the allegations raised in Amidu’s letter to correct some factual inaccuracies for the public to judge by themselves.

In a nine-page response signed by the Secretary to the President, Nana Asante-Bediatuo, President Akufo-Addo rebutted Amidu’s allegations of interfering in his work as well that of not being paid his emoluments together with his deputy.

“Your accusation of interference with your functions simply on account of the meeting the President held with you is perplexing. In exercise of what you considered to be your powers under Act 959, you had voluntarily proceeded to produce the Agyapa Report. The President had no hand in your work. Without prompting from any quarter within the Executive, you delivered a letter purporting to be a copy of your report to the President. The purpose of presenting a copy of the Agyapa Report to the President is decipherable from paragraph 32 of your letter to the President in which you indicate that you hoped the report will be “used to improve current and future legislative and executive actions to make corruption and corruption-related offences very high risk enterprises in Ghana”. It is baffling that you will present a summary report of work, not commissioned by the President or a member of the Executive, to him and expect him not to act on the report, particularly, in light of the clear expression by your good self that the report was supposed to guide future executive actions. It should be noted that article 58(1) of the Constitution vests executive authority in the President. The President was thus under a constitutional injunction to take further action and make further enquiries of you in relation to the work you had purportedly carried out and which concerned the exercise of executive discretion. The President’s meeting with you on 21st October, 2020, was and should have been understood by you in this spirit”, the letter addressed to Amidu in part read.