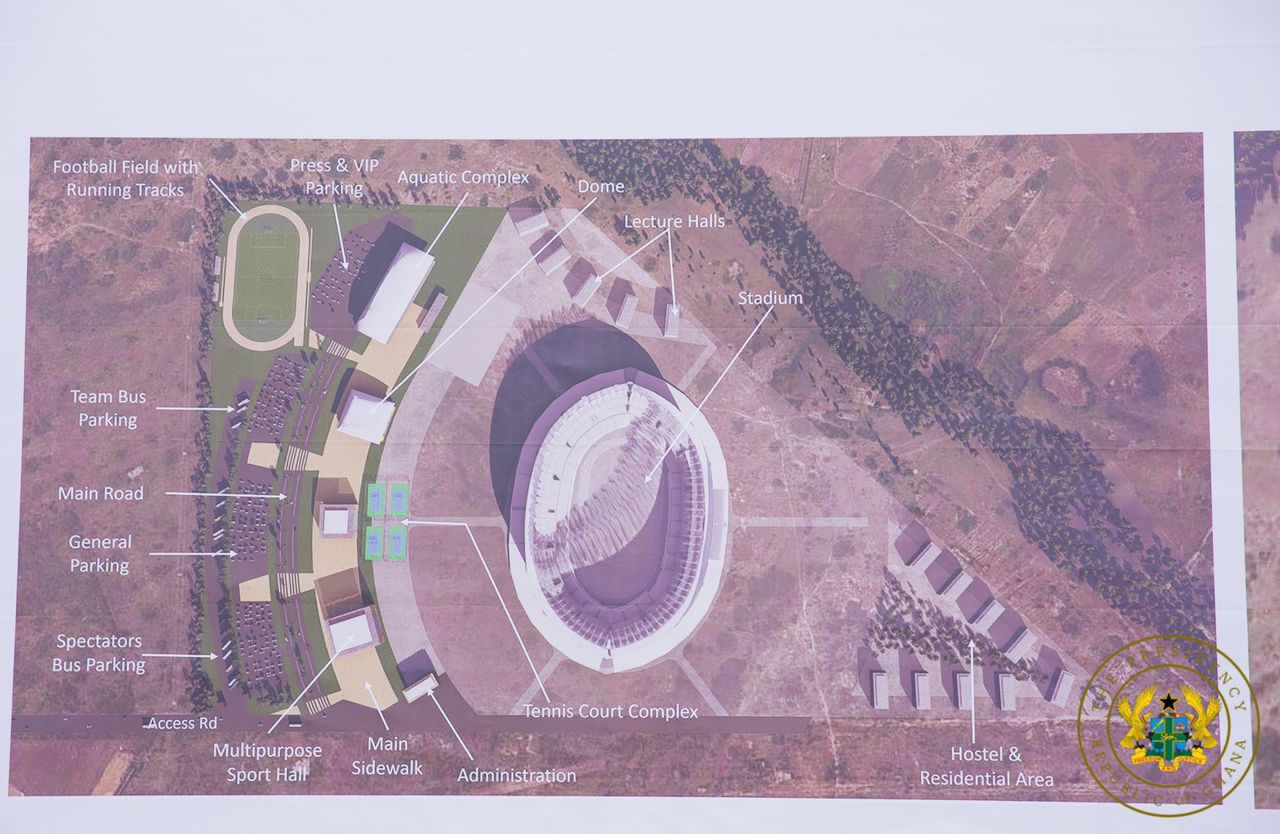 The President of the Republic, Nana Addo Dankwa Akufo-Addo, has cut the sod for the commencement of work for the construction of the one hundred- and forty-five-million-dollar ($145 million) sports complex at Borteyman, in the Greater Accra Region, which will be used for the 2023 African Games.

The rest are a five (5) tennis court complex, including a one thousand-seater (1000) centre court; a 6-lane warm-up athletics track; one FIFA standard football training field; and a 6-kilometre single lane road, and a 3-kilometre double lane road.

Speaking at the ceremony on Tuesday, 31st August 2021, at Borteyman, President Akufo-Addo stated that, since the inception of the African Games in 1965, Ghana has never won a bid to host the games.

“It is in light of this that I instructed the Ministry of Youth and Sports, on 8th May 2018, to prepare, bid and win the hosting rights of the 13th African Games. At the meeting of the African Union’s Specialized Technical Committee on Youth, Culture and Sports in Algiers, capital of the People’s Democratic Republic of Algeria, on Thursday, 25th October 2018, our bid was endorsed, and Ghana was officially declared host of the 13th edition of the Games. COVID-19 notwithstanding, I am confident that Ghana will organize the best ever African Games in history,” he said.

With Government determined to bring back the glory days of Ghanaian sports, in athletics, boxing, football and table tennis, the President explained that “the provision of the requisite infrastructure, to this end, is critical if our nation is to regain its pride of place in sports on the continent and in the world”.

The President continued, “Hosting the 13th African Games will afford Ghana the opportunity to address capacity deficiencies, by providing the relevant human resource capacity to run and manage sports in Ghana. Most importantly, this will give us state-of-the-art sporting facilities, that will support the development of sports”.

He also announced that the 2023 African Games will be a very special landmark games in the annals of the African Games, as it will, for the first time, serve as the qualifiers for the participation of African countries in the 2024 Paris Olympic Games.

With the onset of COVID-19 delaying the start of the Project by a year, President Akufo-Addo explained that Government has decided to act on a proposal from the Ministry of Youth and Sports to adopt a hybrid system of facility development, where upgrade existing infrastructure in Accra, to supplement new ones to be built here in Borteyman for the Games.

He stated that the initial plan of Government was to construct all the sports facilities for the African Games on this 100-acre plot of land, released to the Ministry of Youth and Sports by the University of Ghana.

“In place of the Olympic Stadium Complex here at Borteyman, the University of Ghana Sports Stadium, which was abandoned during the eight years of NDC rule from 2009 to 2017, will be upgraded to international standards for some events for the African Games. I say a big thank you to the acting Vice Chancellor and management of the University of Ghana for this opportunity,” he said.

Following the completion of the games, he stated that the tendency of sporting infrastructure becoming ‘white elephants’ is high, stressing further that these facilities eventually deteriorate, either due to lack of maintenance or underutilisation.

“That is why the model we have adopted for this Games is a framework of the Ministry of Youth and Sports, the University of Ghana and the University for Development Studies, to be involved in managing and maintaining the facilities to ensure sustainability and continuity,” he added.

He expressed the gratitude of Government and people of Ghana to the African Union for honouring Ghana with the right to host and organise the 13th African Games in 2023.

“I assure the African Union that Ghana is ready, willing and able to host the most successful and most memorable of African Games. I also thank all Members of Parliament for seeing the hosting of the African Games in Ghana as a national project, and for working expeditiously on all matters concerning the African Games Project that came to the House,” President Akufo-Addo said.